Mind control a la Asgard part I: Seven Flavors Across All The Nine Worlds

During the 1980s, Chris Claremont had the X-men fight Loki on two seperate occasions. In 1985, the team joined Alpha Flight in opposing the god of mischief... And in 1988, Loki popped up again to cause trouble for both the X-men and the New Mutants. 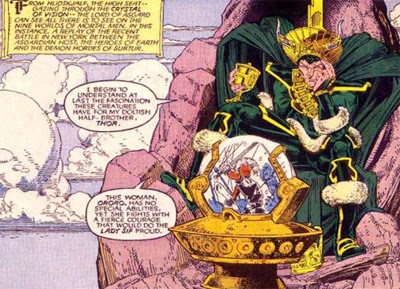 Especially the second outing against Asgard featured an almost obscene amount of mind control. Claremont managed to somewhat contain himself during the first part of what would be known as The Asgardian Wars... But once it came to the X-men and New Mutants... All bets were off. 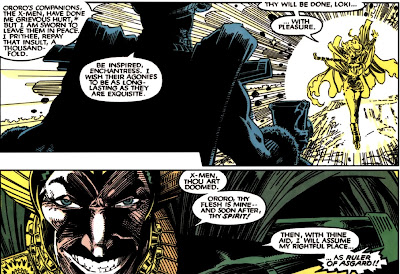 Loki had studied Storm from afar and felt attracted to her, as most bad guys tend to be. But, he couldn't do anything about that affection because he was forbidden to mess with the X-men directly. So, he does what all gods of mischief do: look for a loophole. He asked his associate the Enchantress to step in and kidnap Storm and the X-men to Asgard. And she did. 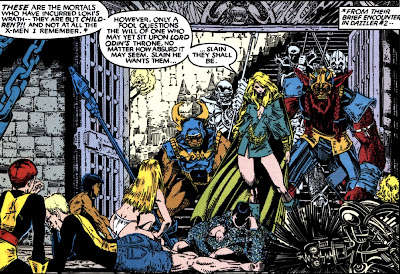 One little problem, though... Storm wasn't actually with the X-men when the Enchantress showed up. Instead, she was with the New Mutants, enjoying a brief respite on the Greek isle of Kirinos. That explains why Illyana is wearing that tight, little white loincloth... Because its a bikini. No, really!

After being raised by Belasco, demonic ruler of Limbo, threats from an Asgardian trollop didn't exactly frighten Illyana and she called up her stepping discs, ready to teleport the team home. Unfortunately, the magic spells protecting the Enchantress' keep scrambled Magik's powers, causing her teleportation spell to go haywire and strand her fellow New Mutants all over Asgard. Illyana herself wasn't quite so lucky: 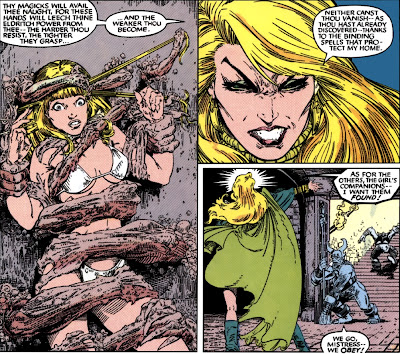 But what of Storm, you ask? She didn't end up in prison with the New Mutants. True, Loki whisked Storm away during the Enchantress'  assault on Kirinos and brought her to his palace where he started to mold her immediately. Hey look, black leather! 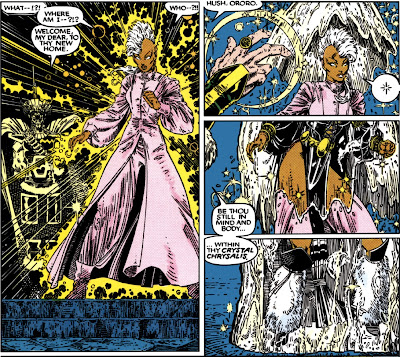 Loki's plan was based on a little more than lust. His stepbrother Thor has recently left on a quest to the domain of the death goddess Hela, leaving Asgard short one Thundergod. With Odin gone as well, Loki figured the time would be ripe for a legitimate takeover as ruler of Asgard, especially if his new wife happened to be a weather controlling thundergoddess.

But first, Storm had to be properly conditioned... Using her longing to regain her lost mutant powers as a hook, Loki seduced Storm by offering a semblance of her old mutant gifts again, starting with the power of flight. But just look what it took for Ororo to take off once more: 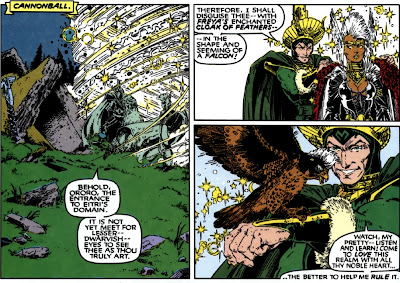 "Watch, my pretty... Listen and learn! Come to love this realm with all thy noble heart..."And what better way to love Asgard as Loki's mind controlled, mohawk'd pet falcon...?  While Storm was being indoctrinated, most of the New Mutants were subjected to forms of domination and mind control as well.

Lets start with Doug Ramsey, the New Mutant Cypher whose power of language didn't exactly help him in a bar fight against Asgardians.

Chained up like a slave, forced to do the dishes in an Asgardian eatery... Ahh, the humiliation.

Wolfsbane found herself stranded in the land of the giants, who hunted her until she was rescued by a handsome young wolf who used his considerable charisma to make the usually prim and proper Scottish girl follow him.

By know, we know Wolfsbane would eventualy get pregnant with the wolf prince's cub. But isn't it charming to see how she felt the first inklings of bestial passion? Writing about a 13 year old repressed Scottish girl who essentially comes in heat for the first time is... Well... Its something at least. 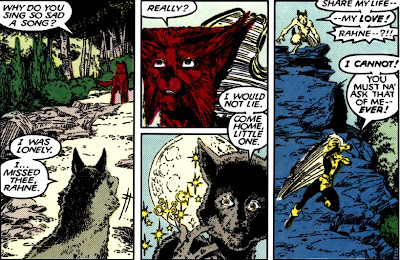 Speaking of heat... A morbidly obese Karma was tossed smack dab in the middle of an Asgardian desert. Trying to survive without resources, she was forced to mind control her own lunch. One thing about Karma's control powers: she's inside her victims' mind, actively controlling their bodies. How does one explain this scene then? 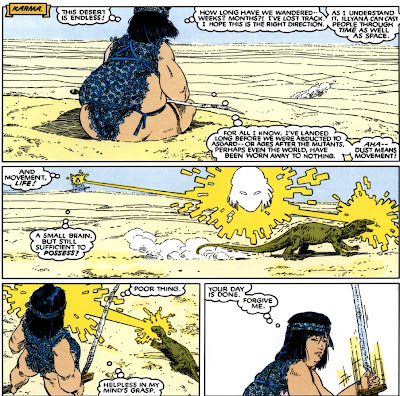 Guess hunger is reason enough to throw common sense to the wind...

The same goes for Magma, who was wandering through the woods until she ran into some faerie folk who were kind enough to offer her food and drink before they'd help her find her teammates. If only Amara knew the price one pays for feasting with the faerie: you become one of them. But that's just the way they wanted it. 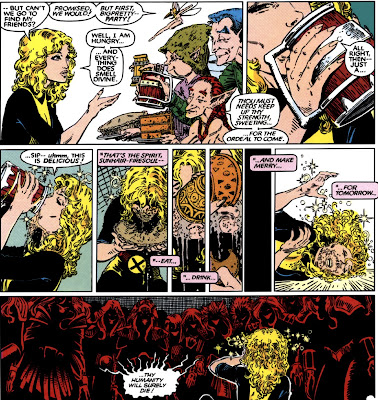 Thy humanity will surely die!

Ow boy, did it ever... The next morning Magma awoke, more fairie than human. The Faerie's reason for turning Magma is simple: they want her to kill their biggest enemy: Eitri, the dwarven master smith. So, before long, she used her powers to burst into the heart of Eitri's domain. 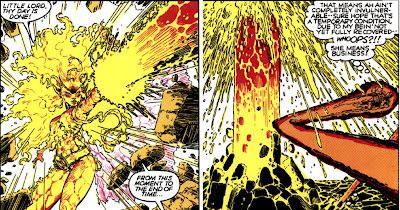 Fortunately for Eitri, he'd been entertaining a house guest recently: Magma's fellow New Mutant Cannonball. He was able to defeat Amara and remind her of just who she really was. Even though it seemed her human past would soon be little more than an afterthought.

But not every New Mutant was suckered into getting mind controlled, humiliated or bonded against his or her will. Sunspot was doing just fine impressing women with his strength at a local bar, Mirage inadvertetly ended up a member of the Valkyor and Warlock?

He actually pulled a Karma and used some mind control to feed himself as well... 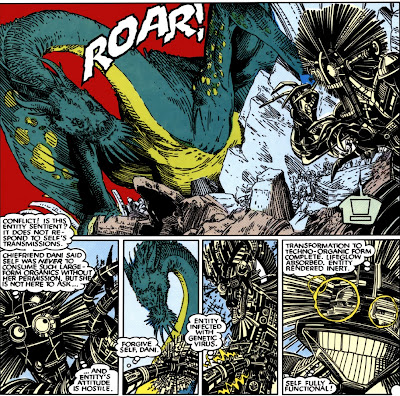 
Is it just me, or does Warlock seem to have the techno-organic equivalent of a foodgasm in that last panel? This brings us to seven seperate instances of mind control... While we're only halfway through the first chapter of the tale. Heck, the X-men haven't even shown up yet!

Posted by Clarmindcontrol at 5:32 PM