Y'know... you NEVER think it'll happen to you until it does.

That's certainly what the mind controlling mutant Malice believed, before she realised she too can be mind controlled in today's entry focussing on Mr. Sinister and his equally sinister schemes.

Now, we all know who Malice is, right? No? For shame, go check out THIS post for more info. But, in a nutshell: Malice is a discorpeal being, able to jump from person to person, instantly taking over their bodies and manifesting a lovely S&M style necklace. 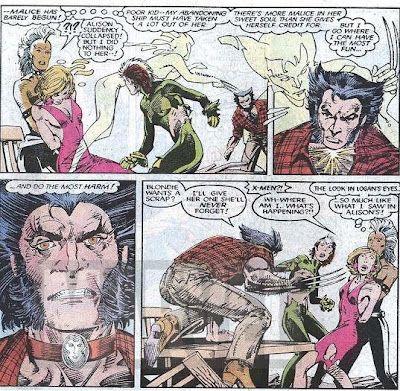 As an unseen member of Mr. Sinister's Marauders, she briefly fought the X-men when she unsuccesfully attempted to possess Dazzler. But it didn't take long before she'd set her eye on another prime candidate from the X-men's ranks: Lorna Dane, better known as Polaris. 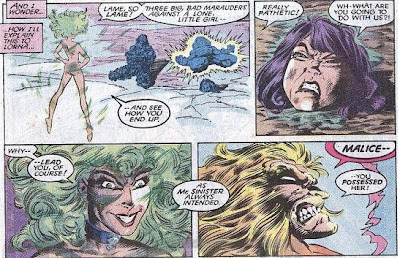 "Malice... You possessed her!"

That she did, and the union was a happy one... Just imagine the shock when the X-men first fought the new leader of the Marauders was actually Polaris. Malice's involvement wasn't even expected until Psylocke did a little poking around... 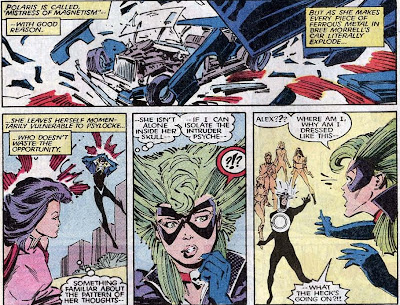 It didn't take long for Malice to regain control and continue her killing spree, almost wiping out the X-men and Lorna's lover Alex 'Havok' Summers as a result. But as Malice discovered just before the big Inferno crossover, even mind controllers can be sucker punched. 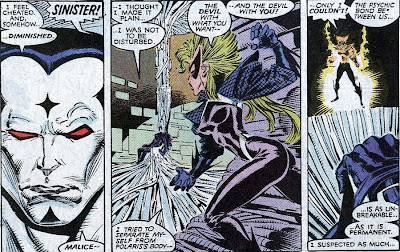 Look at who just got trapped... and didn't even realise it. 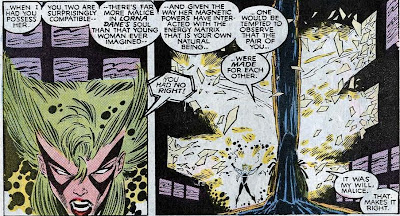 Ow, isn't that just delightful? Malice gets tricked into invading the one person's body that by its very nature disturbs Malice's own sense of self. Turnabout really is fair play after all, or so it seems. 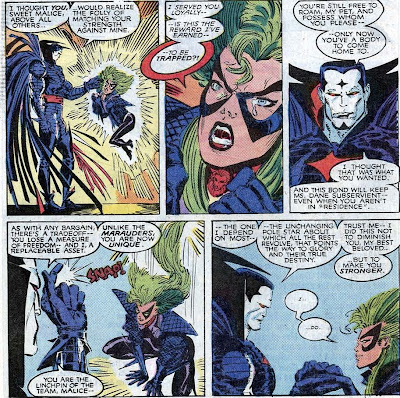 Wait, what? She still can jump from person to person after all? What's there to be upset about then? Also, how interesting that Claremont has Sinister casually point out that Lorna Dane will still be 'subservient' without Malice controlling her.

Consoled, Malice leaves and Sinister gets back to what all insidious and shadowy masterminds do best... talk out loud about how great they are...

And with that ever so disturbing nugget of wisdom from Chris Claremont, we end today's entry.

Posted by Clarmindcontrol at 10:08 PM