Professor Xavier's A-Jerkin' Your Mind part II: Do As I Say, Not As I Do

In the first chapter of Professor Xavier's A-Jerkin' Your Mind, the New Mutants were at long last reunited with their old mentor. Charles had been in deep space with the Starjammers for months, after a destroyed warpgate made it impossible for him to return home.

But thanks to Illyana Rasputin's teleportation powers, he was virtually back in Westchester already... 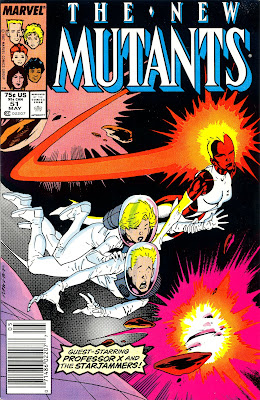 Yet, as always, there were a few problems he had to deal with. For instance: last issue the Starjammer was damaged in the fight against Magus... And being in orbit of a planet that self destructed in the aftermath of that confrontation didn't help either.

Add to that the fact the Starjammers were wanted by the Shi'ar empress Deathbird, which meant bounty hunters everywhere were on the lookout. Long story short: the Starjammers needed Xavier and his telepathy for their continued survival, while Charles also felt he had to return to Earth to help out after the mutant massacre. Who do you abandon?

One heck of a dilemma, but in the opening pages of # 51, it seemed like Illyana was about to make that decision for him... 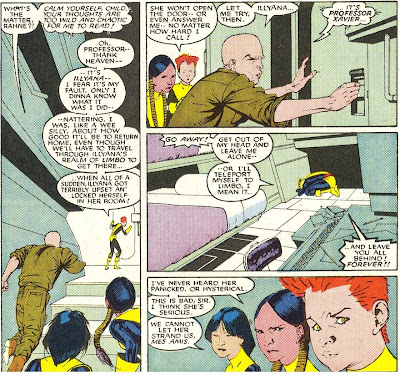 "Get out of my head and leave me alone... Or I'll teleport myself to Limbo. I mean it...
And leave you all behind forever!!"

Instead of leaving her be, Xavier had other plans for the obviously terrified girl, who just last issue risked her very life to teleport across time and space to reach him. If you don't want to listen to reason young lady, we'll make you... 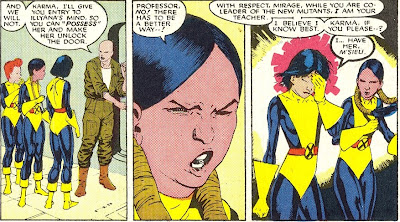 "Karma, I'll give you entry to Illyana's mind, so you can "possess" her
and make her unlock the door."

Apparently, in space... when diplomacy fails, mind control is the way to go. This is a complete break from how Claremont has written Xavier up to this point. The 1960s Xavier didn't even blink when he had to control crowds, erase someone's memories or worse: make Beast's parents forget they even had a child.

But under Claremont, the professor became a bastion of morality who flat out refused using his powers for manipulation, not even for a 'good cause'. Here he is seen pontificating that very point in Uncanny X-men # 151, right after Kitty Pryde's parents decided to transfer her to Emma Frost's school and Wolverine made a sensible suggestion...

"To deliberately manipulate a sentient mind would make me no better than the villains we oppose."

From your mouth to Illyana's mind, Charles... And hey, it's not like it'd be the first time Kitty's parents got zapped by a mind control whammy...

One might argue that Charles had no choice in this instance. Maybe Illyana was, in fact, too unstable and mad with fear and grief to listen to reason... And yes, you might also say that Xavier couldn't risk having her freak out and bolt, because it would mean stranding the other New Mutants in a potentially deadly situation.

But all that still doesn't rationalise what happened once a possessed Illyana emerged from her room... 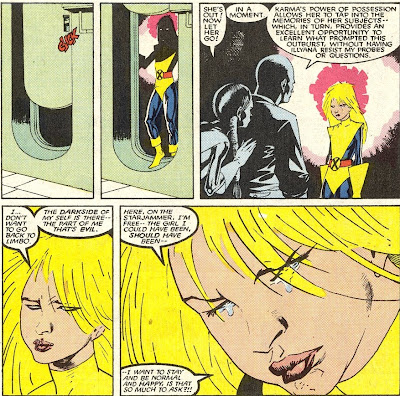 "An excellent opportunity to learn what prompted this outburst,
without having Illyana resist my probes or questions."

Now this is just wrong... Getting her to cooperate and calm down is one thing, but having Karma use her possession powers to drag a very emotional, extremely personal truth out of Illyana... right in front of Dani, Rahne and the others is a flagrant infraction of every conceivable code of ethical or moral conduct. 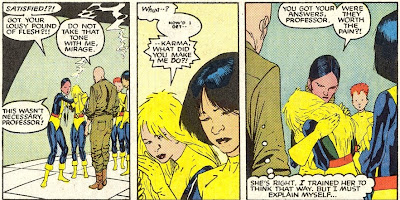 "Satisfied!?! Got your lousy pound of flesh?!!"

Charles claimed he did it to figure out why Illyana was reluctant to return home, via Limbo. And the answer should be obvious: she doesn't want to return to Limbo where she left her darkside behind, the part of her soul that was corrupted by years as Belasco's apprentice. On the Starjammer, she's as close to being her normal self as she'll ever be and she didn't want to lose that.

But it's not like she'll have an actual say in the matter... 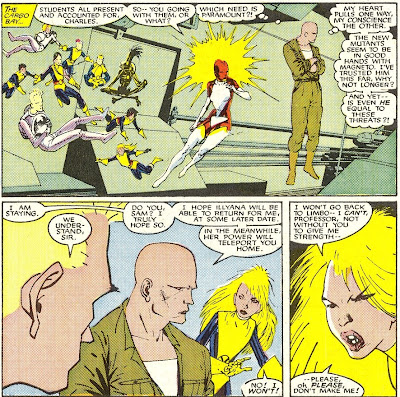 And Charles was really hoping she would be pleasant and understanding about being forced to succumb to her (inner)demons again. Well, if she doesn't want to do things willingly, there's always Karma... 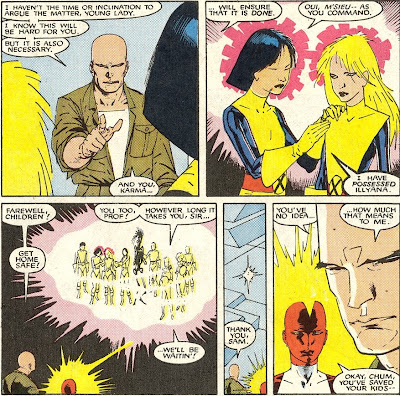 "I haven't the time or inclination to argue the matter, young lady."

With that, Xavier sent his children home, keeping them safe from the roving band of cloaked Shi'ar bounty hunters that were closing in on the Starjammer. He was the only one able to pick up their position by homing in on the crew's thoughts. If he'd left for Earth, the Starjammers would not have survived.

On paper, he made the selfless and right decision, sacrificing his own desire and chance to go home in order to keep everyone he cared for as safe as possible.

Still, that did little to improve Illyana's mood once Xi'an released her... 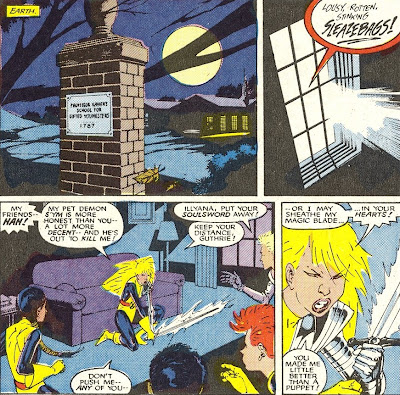 "You made me little better than a puppet"

In Limbo, she fell prey to the evil influences she had left there and was reunited with her soulsword... In other words, Illyana Rasputin was gone, now all that remained was Magik. And she was mad.

Just how she thinks its right to blame áll the New Mutants is a little weird, especially considering Dani stood up for her... But you don't argue logic with a hopping mad mistress of a demon realm who threatens to stab you in the heart. 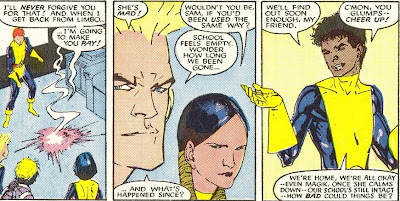 "We're home, we're all okay... even Magik once she calms down... Our school's still intact. How bad could things be?"

Posted by Clarmindcontrol at 10:49 AM