Professor Xavier's A-Jerkin' Your Mind part I: Leia's got nothin' on Illyana

Leaving the Bill Sienkiewicz era of New Mutants for a bit, today's entry skips ahead to the double sized fiftieth anniversary issue which reunites the New Mutants with professor Xavier. 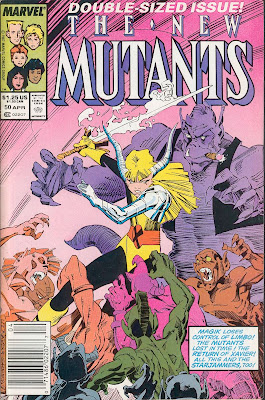 Back in Uncanny X-men # 200, a mortally wounded Charles Xavier was teleported away by Lilandra and the Starjammers. After restoring his health, the band of space pirates ran into a bit of trouble and were unable to return him home. So Charles made the most of it, joining the Starjammers in an unofficial capacity and enjoying himself on all the different worlds they visited.

Until he picked up some very familiar brain patterns... 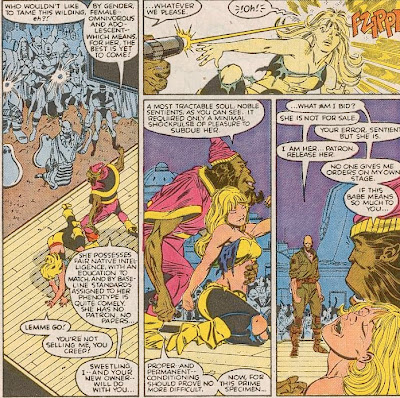 "Sweetling, I... and your new owner... will do with you whatever we please"

Yup... that's one heck of a way to open an anniversary issue: having a halfnaked 15 year old girl auctioned off as a slave, while she writhes and squeals in orgasmic pleasure from the 'minimal shock pulse of pleasure' she received. Classy.

Charles and the Starjammers manage to escape with Illyana who, after recovering from her 'pleasure pulse', informs her old teacher about the situation back home. Thanks to her, Corsair received word he had become a grandfather, but that was about the only piece of good news... After all, the Marauders had just massacred the Morlocks and the New Mutants themselves had been fighting Warlock's evil dad the Magus.

Wait, let's have Illyana tell it herself... 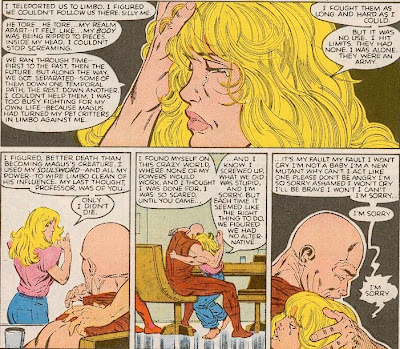 Yes, after teleporting the techno organic Magus to Limbo, he went on to infect Illyana's demons, turning them against her. Illyana only managed to hold them off by leaving her soulsword and her dark magics behind in Limbo as a bulwark and symbol of her dominance. All she had left were her mutant teleport abilities and since Limbo reaches across all time and space, she was able to teleport to the professor.

The New Mutants had become lost in space and time when Magik teleported them around in an attempt to escape Magus. That's why Xavier's first priority was to rescue his young wards. Joined by Lilandra and Binary (Carol Danvers), Illyana and the professor travelled to Limbo where they briefly confronted S'ym before they were able to save the stranded teens.

Once the team was reunited, they popped back to the Starjammers where they learned just where Magus had gone after escaping from Limbo... 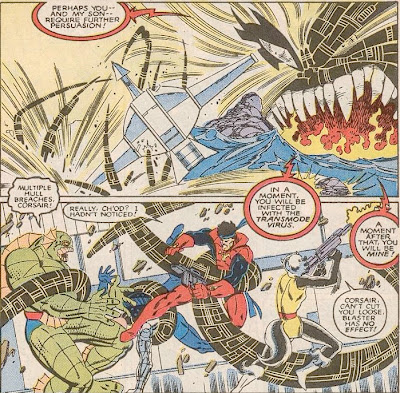 Magus ripped apart the entire world to get to his son, in order to finally end the 'maguswar'. You have to wonder how why the Technarx even bother to reproduce when they know they have to kill their offspring anyway or worse: be killed by them. It's not like they need to have children, they're machines that feed on organic life to sustain themselves indefinitely.

The New Mutants and Starjammers seemed hopelessly outmatched by the planet tearing Magus, but the professor had a plan... let's use some mind control! 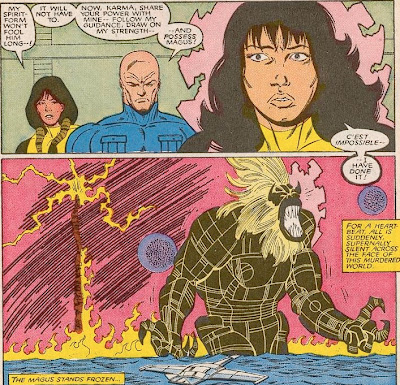 "Now, Karma, share your power with mine... follow my guidance, draw on my strength...
and possess Magus!"

No Karma, c'est most definitely possible... But her control of the giant robot creature was shortlived... Which meant Warlock and Cypher had to work fast. "My son has soulmerged with a bioform... but such a mad act will not save them!"

Gee, looks like gay marriage is also a bit of an issue on Technarx Prime.

In the end, Magus is defeated when Cypher manages to rewrite the creature's 'genetic' coding. He reprograms his mind and body, thereby ending the threat... for now.

"Once I broke it, I could define the very nature of his reality".

That Doug Ramsey sure is bad ass. If only he'd been a bit more bulletproof.

We'll cover the aftermath of # 50's planet crushing space opera in part II of Professor Xavier's A-Jerkin' Your Mind: Do As I Say, Not As I Do

Posted by Clarmindcontrol at 1:03 PM