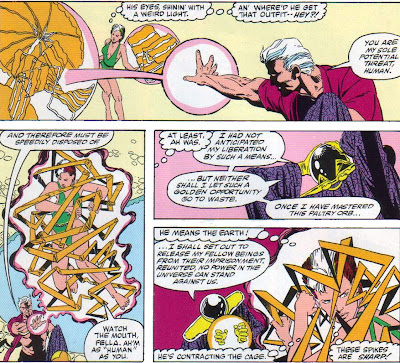 When we last left the X-men in Marvel Fanfare # 33, the team had been surprised by the appearance of the alien Chief Examiner, a character from Marvel's shortlived 1984 videogame tie in Questprobe. The Examiner was on Earth to assess the abilities of superhumans in order to use their powers to defend his homeworld of Scadam from the invading Black Fleet.

After turning most of the team to statues, the Examiner somehow took over Magneto's mind and attacked Rogue who came to the party late. But as she escaped from this cage, Rogue was in for one more surprise... 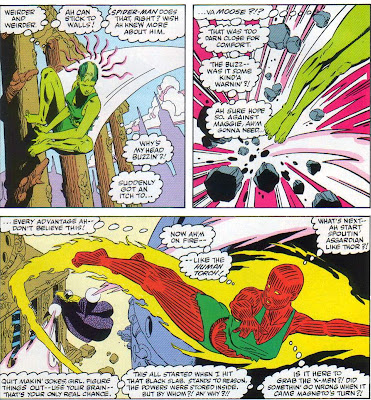 After hitting the Chief Examiner's trademark dark portal, Rogue suddenly manifested the strength of the She-Hulk, the agility and spider sense of Spider-Man and the flame powers of the Human Torch. In earlier Questprobe issues, the Examiner copied their powers and apparently Rogue's mutant absorption gifts were able to tap into that as well. But while she fought a dressed up Magneto, the actual Erik Magnus Lensherr was somewhere else... 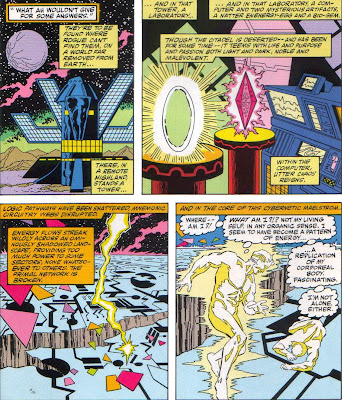 Gotta love that organic sounding exposition. We all narrate our own lives to ourselves in the third person, right? But Magneto found himself trapped inside a matter-energy egg with a chap called Durgan. He's the brain behind the Chief Examiner, who is revealed to be merely a computerised construct that. Wait, I could type up paragraphs of dry exposition, or I'll have Durgan tell you the same boring story himself... with pictures! 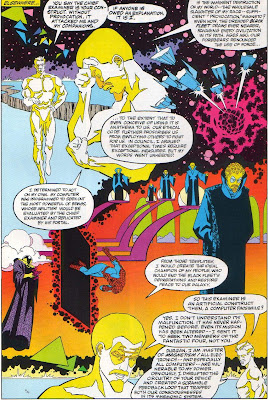 "I am master of magnetism. All electronics are vulnerable to my powers. Obviously, I disrupted the circuitry of your device and created a scramble feedback loop that trapped both our consciousnesses in its mnemonic system."

Durgan and Magneto were trapped inside the Chief Examiner's operating system. But who was running the show then? 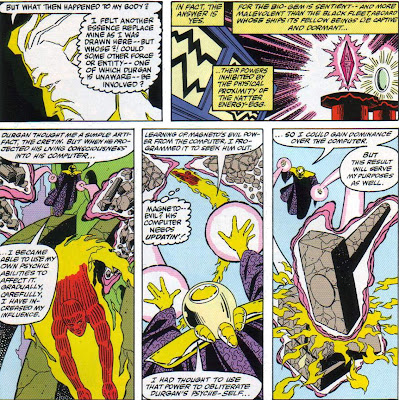 "I felt another essence replace mine as I was drawn here. But whose...?"

So, if we can trust the omniscient narrator's explanation... Durgan didn't realise the seemingly decorative artifact he'd placed right next to his invaluable creation, was actually a sentient evil gem bent on taking over the Chief Examiner computer and use it for conquest and all that fine stuff. Ah, comics...

So how did Magneto escape? Simple. By convincing Durgan he was boss and demanding control of the device back. 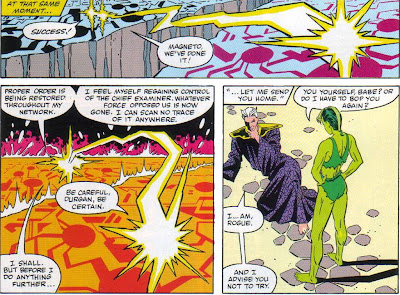 "I feel myself regaining control of the Chief Examiner, whatever force opposed us is now gone."

Now, isn't that might convenient? Whatever evil presence inhabited the Examiner or the gem it came from is just gone. And with Magneto back in his body, the Chief Examiner is ready to go on looking for suitable superpowers. But not before saying goodbye... 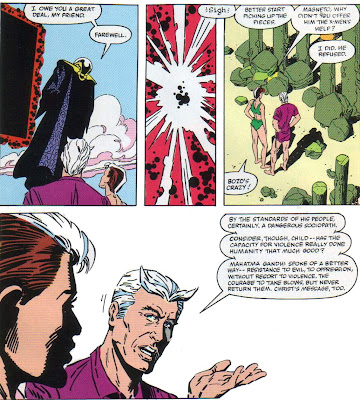 When the mass murdering mutant master of magnetism starts quoting Ghandi and Jesus...  Worry. Or snicker. Or do a trademark Liz Lemon eyeroll. Whatever feels most appropriate.

Oh, and contrary to popular belief ánd common sense... this wasn't the last appearance of the Chief Examiner. The late great Mark Gruenwald, ever the champion of little known or used characters, brought in the Examiner during his run on Quasar. Still looking for super powers to poach, he homed in on Kayla Ballantine who had just become the unwitting host of the New Universe's uberpowerful Starbrand.

He asked to siphon this energy source and Kayla willingly agreed, figuring she'd be better off without them. It didn't go quite the way either one of them planned... 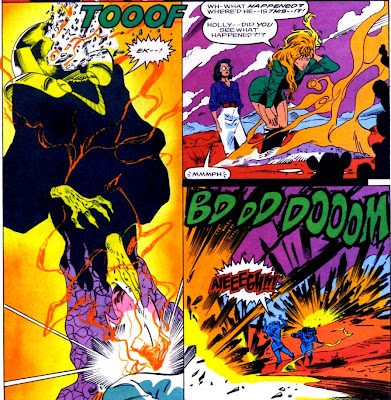 That's what you get when you try to make 1984 computer equipment compatible with anything more challenging than Pong.

Game over for Questprobe, but at least the Chief Examiner went out with a bang.

Posted by Clarmindcontrol at 8:22 PM