Brand New Brood Control part I: Guess Who's Back? 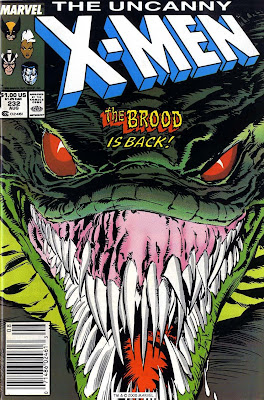 The BROOD is back!"

If you'll allow me to borrow a line from Stephen King: "Sometimes... they *do* come back."

'They' being the Brood, the massively popular alien race that almost turned the X-men into host bodies for their new queens back in 1982. Chris Claremont had refrained from bringing them back too quickly, finally giving in to popular demand with a three parter in 1987 that felt more like a modern day horror flick than the original Brood saga that felt very much like the 1979 cult movie Alien.

But Claremont wouldn't be Claremont if he didn't subtly weave the return of the Brood into his ongoing storylines, months before the frightful aliens would actually appear in the book. Take for instance this scene from Uncanny X-men # 218, which features a frightening discovery by X-men reservists Havok and Polaris after getting run off the road by a frantic driver behind the wheel of a VW van. 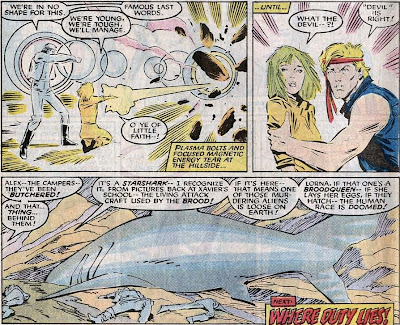 "Lorna, if that one's a Broodqueen... if she lays her eggs, if they hatch... the human race is doomed."

No, that isn't a scene from Jaws VII, it just so happens Lorna and Alex encounter one of the Brood's space sharks, personal transports the aliens use in their stellar travels. It crashed near a New Mexico campsite, apparently killing everyone around.

Claremont would pick up this thread a good fourteen months later in Uncanny X-men # 232, in which we discover the link between the crashed space shark and that VW-driver who ran Alex and Lorna off the road. 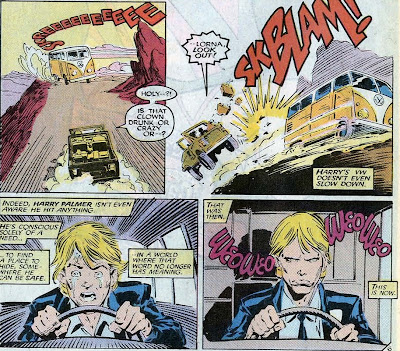 Meet Harry Palmer... a medic who was present when the space shark literally crashed his camping trip and everything went straight to hell... 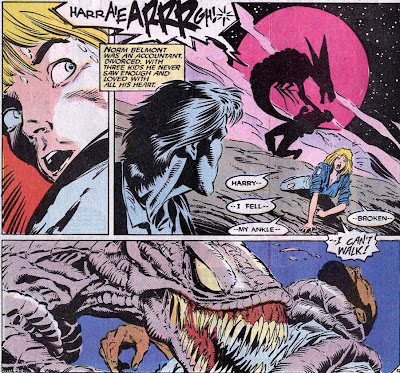 Harry thought he'd been able to escape this gruesome scene unscathed, despite feeling horrible about leaving his friends behind to die. But he couldn't have been more wrong, as we see this issue when he visits a lawyer who suffered a heart attack when his mutant fire breathingpowers first manifested themselves in court. He has a rather... unique... way to heal his patient... 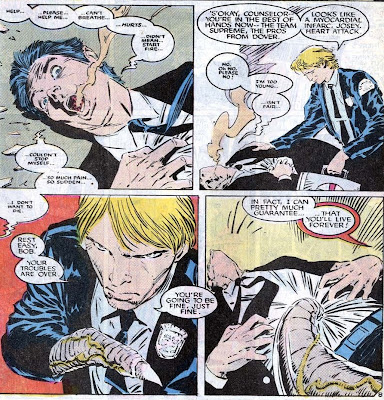 "Rest easy Bob. Your troubles are over. You're going to be fine. Just fine.
In fact, I can pretty much guarantee... that you'll live forever."

Oh snap, so Harry has been infected by the Brood as well! And by infecting the dying Bob with an egg, he quite rightly claimed the man would live forever. After all, as has been previously established, Brood embryos boost the human immune system to the extreme, making sure their host bodies recover from the most serious of injuries or ailments.

After a hard day of saving people and/or turning them into Brood hosts, Harry returns home to find the X-men waiting for him. As Rogue thinks to herself during the ensuing fight, the team had been on Harry's trail ever since Havok (allegedly) clued them in on finding the crashed Brood vessel in New Mexico. 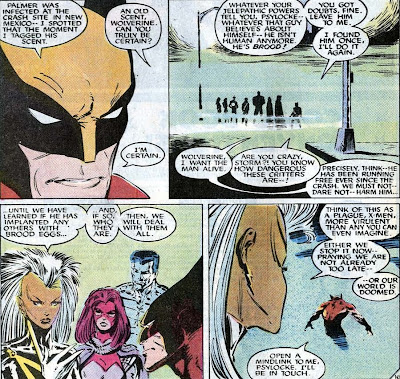 "Palmer was infected at the crash site in New Mexico...
I spotted that the moment I tagged his scent."

Harry however, still has no clue he's actually a Brood. Even though he effortlessly withstands and repels attacks from Colossus, Psylocke and several other X-men powerhouses. He runs for his life, even boarding a bus in order to cover his tracks. But he finds Rogue posing as one of the passengers, ready to take him down. Unfortunately, due to lack of experience with human/brood hybrids, Harry manages to gain the upperhand and this anything but phallic scene is a fact... 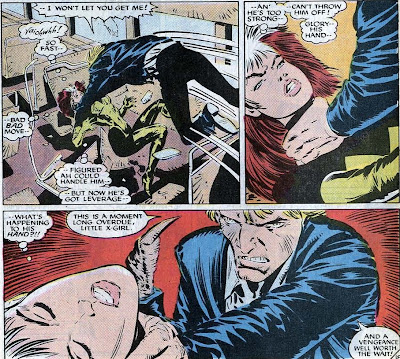 "This is a moment long overdue, little X-girl..."

It didn't work then, either.

Rogue is saved and the team finally manages to corner their quarry. That is, until the police and some locals showed up to reveal they weren't exactly who they seemed to be... 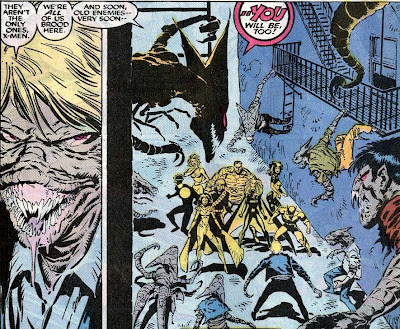 Oh boy, talk about a cliffhanger...

To find out who lived, who died, who spawned wings and tossed airplane engines around, check back for Brand New Brood Control part II: Temptress *IS* A Harsh Mistress...

....
But before all that good fun... consider this: remember how Harry was shocked to see the Brood that killed his friends and recruited him. So, whatever happened to her? She didn't just die off, or Havok and Polaris would have discovered her remains among the campers she killed. And given the Brood's strong matriarchal society, it's pretty hard to imagine an elder queenf would relinquish or even share power with Harry, her half human daughter. Anyone care to explain this away?
Posted by Clarmindcontrol at 2:28 AM