She meant so well, but she was punished so much for being who she really couldn't help but be... A clone of Jean Grey, created by Mr. Sinister to seduce Cyclops in producing the most potent mutant offspring ever conceived... And after accomplishing that goal, all the thanks she ever got was her husband abandoning her for the real Jean, while Sinister ordered his Marauders to kill her.

Needless to say, she was more than a little ticked off at the hand life dealt her. And when Limbo's top demon S'ym offered her a better deal in Uncanny X-men # 234, the tired, slightly naive and mostly world weary Maddie Pryor accepted, thinking it was only an elaborate dream of sorts... 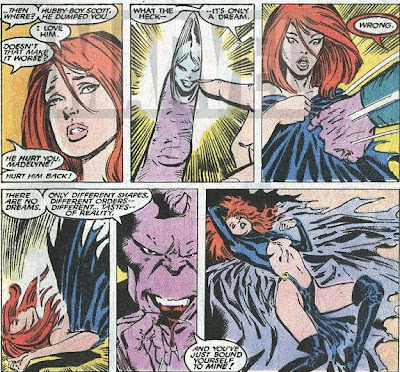 "And you've just bound yourself to mine!"

S'ym had set in motion a chain of events that would turn Madelyne into the Goblin Queen, a central player in the 1989 crossover Inferno. And, clone of Jean Grey or not, by the time the story started in Uncanny X-men # 240, Maddie had proven herself capable of quite a bit of mind control ánd body transmogrification.

For example, this is what happened when she visited her own grave of sorts... 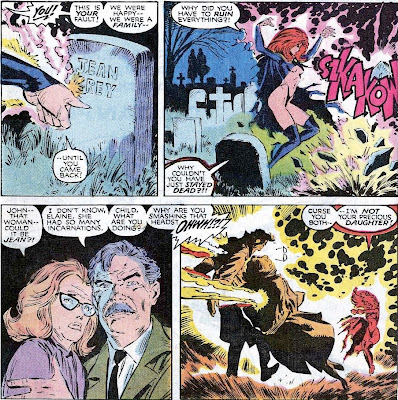 "Curse you both... I'm not your precious daughter!"

That much seems obvious... Most beloved children don't shoot their parents on sight. But the already far from mentally stable Madelyne wasn't out to kill professor John and his wife Elaine Grey. No... A fate far worse than death awaited them. 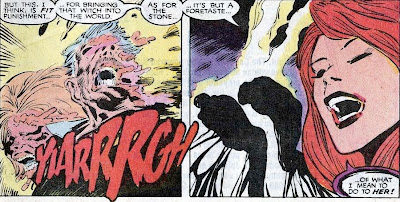 Yes, those are cocoons in the background. Maddie didn't murder her 'parents', no... But before she could deliver another classic 'triumphant villain' style monologue, she got an unexpected guest... 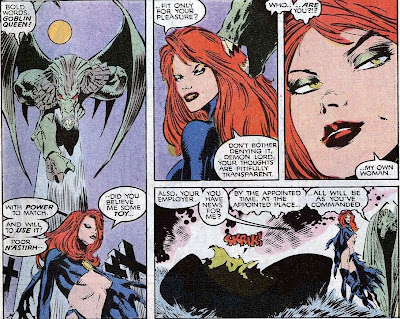 Moments after N'astirh's unexpected arrival, the Goblin Queen's pods hatched with a distinctive *skrak!* and we learn the Greys are alive and well... Sort of. 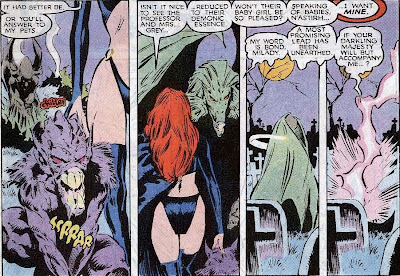 "Isn't it nice to see the professor and mrs. Grey reduced to their demonic essence."

She had just used her Goblin Queen powers to turn two innocent civilians into a pair of mind controlled pet demons... Pawns in her war game against the woman she originated from. And this wasn't the only mind control power she wielded, as we'll see in part II of Madelyne's Mean Mind Control Make Over: Inferno Infers The Inconceivable.
Posted by Clarmindcontrol at 2:39 AM