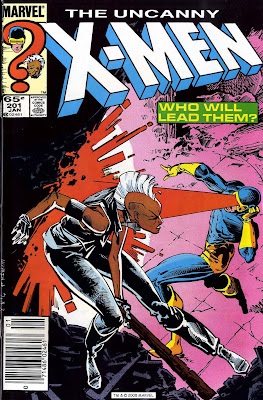 Case in point, January 1986's Uncanny X-men # 201 in which Claremont gave the team time to catch their breath and reflect.

In this prototypical classic 'downtime' issue, the X-men were reflecting the many changes thrust upon them after Uncanny # 200, which featured the departure of professor Xavier, the arrival of their former archenemy Magneto as the new headmaster and...

The birth of Cyclops and Madelyne's first child: Nathan Summers.

Which was a little weird for Rachel Summers, the redhead telepathic future daughter of Scott from an alternate timeline. Here we have a touching scene between Kitty and the Summers siblings. 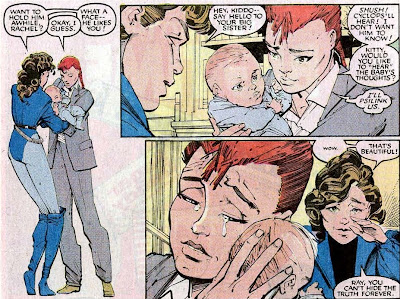 It's hard to imagine just how 'beautiful' the thoughtprocess of a newborn is, considering they can't even recognise their own fingers yet.

Still, years later during his Excalibur run, Claremont remembered this psilink, established between Kitty, Rachel and young Nathan. At the start of the Inferno storyline, Nathan was kidnapped and Rachel flew to his rescue, dressing Kitty up as a baby in the process...

Getting back to the actual story... Uncanny X-men # 201 saw the X-men and their former leader Cyclops returning to the mansion after some adventures in Asgard and Paris, France. Their recent experiences had left Scott with the nagging notion that he should take over as teamleader. Storm had been a more than capable replacement after he left in the wake of Jean Grey's death... But Ororo had recently lost her powers.

Scott felt this no longer made her fit to lead, forcing him to step up, especially in light of the professor's absence and Magneto's presence. Madelyne didn't really agree. 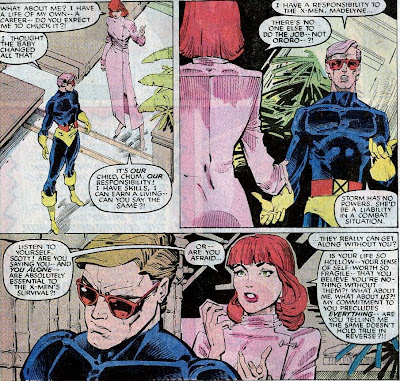 "Or... are you afraid... they really can get along without you?"

... For someone who just gave birth, Maddie Pryor sure is in amazing shape. Bye bye excess baby weight, hello skin tight mumus. And, quite understandably, she wants Scott to leave the team and be a father to his son. After all, would you prefer a husband who abandons you on a regular basis to court death? With, from her point of view, a band of strangers no less?

Their argument led to a fight Storm broke up by offering a resolution. 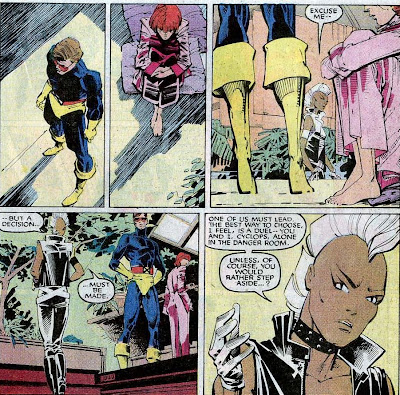 And what better place for a duel than the X-men's holographic Danger Room?

In a truly classic 1980s scene, the X-men and the New Mutants (along with Magneto dressed in hot purple pink in the far right) huddle in the Danger Room's control perch to witness the confrontation that's about to take place. Doug 'Cypher' Ramsey programs an environment that compensates for Storm's lack of powers. And while the two X-men leaders throw down, Madelyne has a quiet moment with the baby... 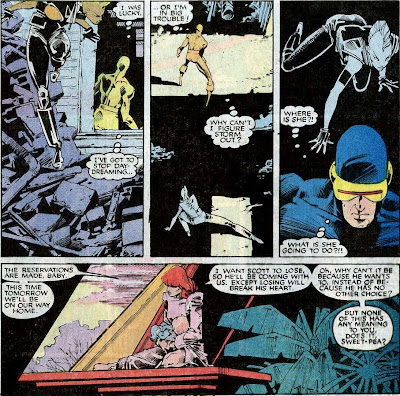 "I want Scott to lose, so he'll be coming with us. Except losing will break his heart." 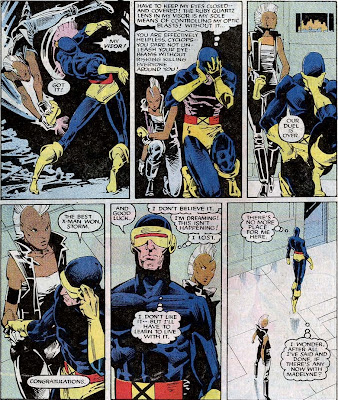 "I don't believe it. I'm dreaming! This isn't happening! I lost"

Scott doesn't know the half of it. He leaves the team to be with his wife and son, but before long he abandons them after learning his first love Jean Grey was still alive. Along with the former original X-men, Scott and Jean formed the new team X-Factor, took a hold of baby Nathan... While Madelyne was abandoned and, well... let's see how she fared? 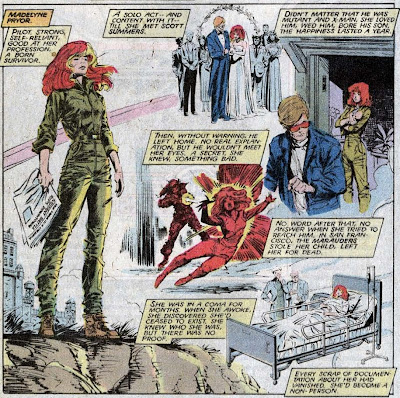 After some decidely convoluted doings, Madelyne was almost killed by the Marauders... This assassination attempt only made sense, considering their leader Mr. Sinister was the one who created Maddie, a clone based on a genetic sample of Jean Grey.

When Jean returned, Madelyne had become superfluous to the evil genius' plans... Not in the least because she had already gave birth to a child that contained Mr. Sinister's ideally imagined bloodlines: Jean & Scott.

But poor Maddie would soon become essential to the schemes of Limbo demons S'ym and N'astirh, who ultimately transformed her into the Goblin Queen during the 1989 Summer crossover Inferno.

The X-men and X-Factor gathered to oppose her, but in X-Factor # 38, Louise Simonson had the Goblin Queen drop a little truth bomb... 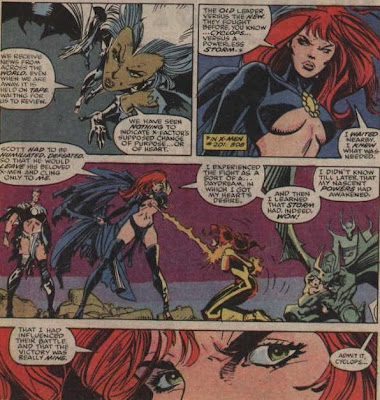 "I didn't know that till later, that my nascent powers had awakened."

It may seem like a bit of a cheat of a convoluted cop out, but it actually makes sense. If you clone a telepathic telekinetic, it only makes sense you end up with a clone that has at least a similar genetic potential.

But Scott kept things in perspective.

Mind controlled or not, the X-men and X-Factor joined forces to stop the Limbo demon's invasion and Madelyne didn't survive the experience...

All's well that ends well, but with Maddy revealed as the reason Cyclops lost... one does wonder who would win: Cyclops or Storm?

Any thoughts?
Posted by Clarmindcontrol at 12:02 AM

Good question. Cyclops could and did defeat the X-Men in a mock battle during the Proteus storyline, so he could take Storm then. Storm as the more ruthless leader may be a different battle. The pickpocket and child thief would play dirty, while Cyke's morality may hinder him. She did win the Morlock leadership mantle in a knife fight with no powers, hence Scott better not hold back if he got a good bead on her. If Storm had her full powers, Scott would be in trouble.