Chris Claremont had been in the business for a little under 5 years at this point, working on Marvel's editorial staff while taking every chance to moonlight as a writer. In this case, he got to write 'Doomball', a one off job on Defenders # 19.

And, contrary to what the title might suggest, no, Doomball doesn't involve either one of Victor von Doom's testicles. 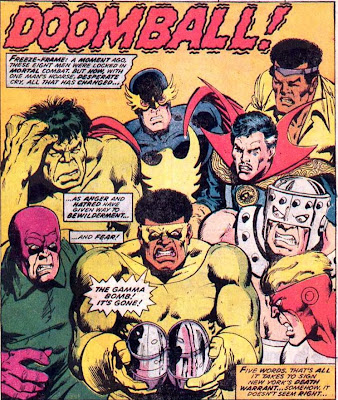 Working off a plot by Len Wein, Chris got to write the Defenders and the Wrecking Crew (in their third appearance ever!) as they opened up the prize they had been fighting over in the previous issue: a miniature gamma bomb. But when they opened the casing, they were shocked to find... Well, you heard what Thunderball said, right?

Actually, Thunderball's the whole reason there even is a pocket gamma bomb to begin with. Before he became a supervillain after touching the Wrecker's magic crowbar, he was a nuclear physicist nicknamed 'the black Bruce Banner'. With good reason, he used Banner's original gamma bomb designs to create this handy dandy version of the WMD.

Unfortunately, when the company he was working for claimed the rights to his creation (always read the fine print in your contract, kids) he got so mad he broke into the lab and took off with the bomb. Of course, that never quite works out... 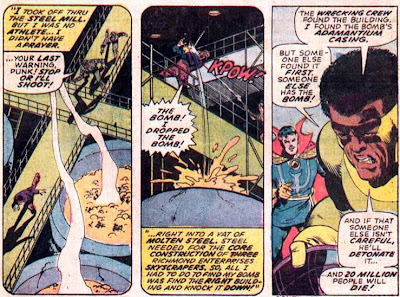 "All I had to do was find the right building and knock it down!"

That explains why the Wrecking Crew had been destroying buildings in the previous two issues. The Crew thought they had recovered the device last issue and planned to hold New York hostage with it. But all they actually had was the bomb's empty adamantium casing.

Doctor Strange offers the Defenders' aid in tracking down the actual explosive, but the Wrecking Crew quickly turns on the team, knocking even the Hulk out before taking off. When Strange comes to, he's in no mood... 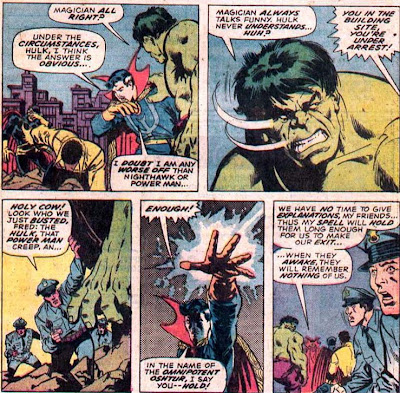 "Enough! In the name of the omnipotent Oshtur, I say you... Hold!"

Poor cops... Getting mind controlled while they were just trying to do their job. Heck, if you were called in to investigate why a perfectly good skyscraper just came tumbling down and you saw the Hulk lumbering around the scene, what conclusion would you draw?

Hard to believe as it is, four supervillains dressed in primary colors can actually be be a bit difficult to trace. So the Defenders waste a little time trying to find the Wrecking Crew until the answer comes from the unlikeliest of sources... 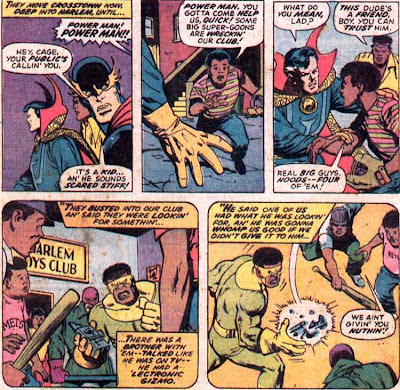 "There was a brother with 'em... talked like he was on TV... he had a 'lectronic gizmo"

Yeah, guess it's safe to say Chris Claremont didn't have the voice of the innercity black youth down at that point. But more importantly, aren't baseballs supposed to be white? The one in the kid's glove almost looks like it's made of metal? Surely, that won't be a plot point or anything...

Well, of course it is.

After soundly trashing the Wrecking Crew (and the Harlem Boys Club in the process), the Defenders learn that the little boy who warned them actually had the bomb all along. And wouldn't ya know it... the second they laid eyes on it, the device started its countdown.

Now, what could the Defenders do? After all, they're only a team whose founding members are a behemoth powerhouse capable of throwing stuff into orbit and Earth's sorceror surpreme... A magician with more teleportation spells than spots up his sleeve. 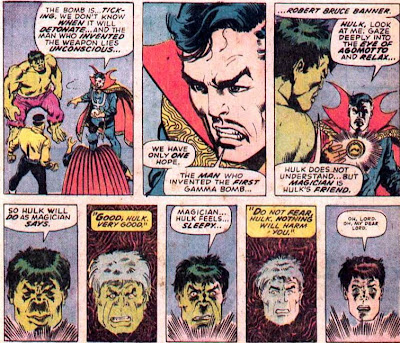 "Hulk, look at me. Gaze deeply into the eye of Agomotto and relax"

If all else fails, try mind control... Also, Doc misspoke: it's the eye of 'AGA-motto', but considering the stress Strange was under, the mystical deity didn't seem to mind and turned a blind eye. 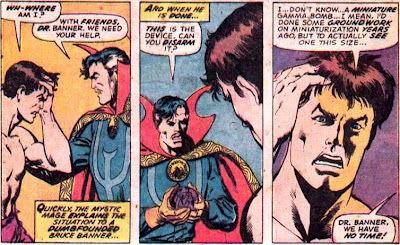 "This is the device. Can you disarm it?"

Poor Banner, he only gets to come out during the lousy parts of the story these days. And now he has to disarm a device he's only done some extremely preliminary work on. With no shirt... and no tools. Well, that is until Doctor 'deus ex machina' Strange delivered... 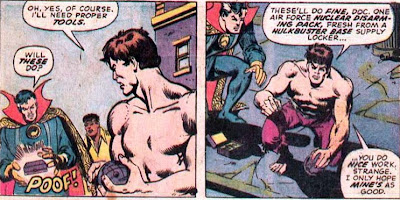 "One air force nuclear disarming pack,fresh from a Hulkbuster Base supply locker..."

Sheesh Doc, if this whole 'sorceror supreme' gig doesn't work out, you could make a fortune in overnight delivery services. Also: if he's able to yank a similar sized object halfway across the country, opening up a dimensional rift to deposit the gamma device into a realm where radiation is a snack food would have been just as easy. But, it wouldn't have made for dramatic scenes like this... 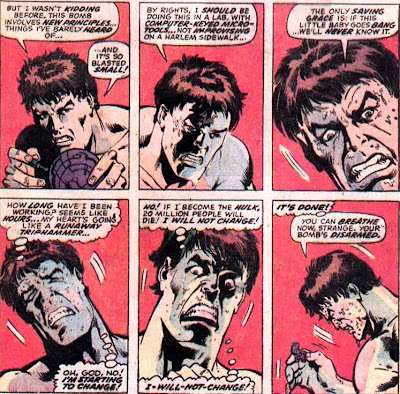 C'mon Doc, less talk, more screwing... In an early example of a semi-verbose Claremontian style monologue, Banner fights off his nerves and the transformation long enough to disarm the bomb, collapsing after the effort. 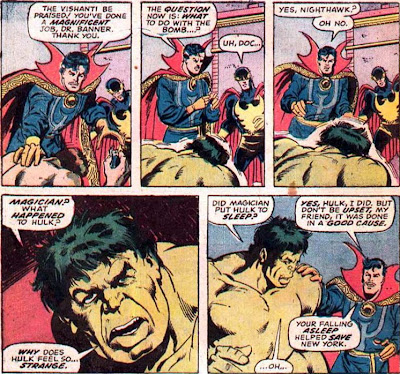 "Did magician put Hulk to sleep?"

That Hulk... A hero at last. And all he had to do was fall asleep.

Posted by Clarmindcontrol at 2:59 PM