Rogue and Cyclops Get Mind Controlled: The Sinister Way

When one thinks of Inferno, it mostly summons up images of an unending horde of demons invading New York.

And while a lot of that did indeed go down, back in 1989, during the finale of Inferno, there were no more demons to be fought, only those ephemeral inner ones. Limbo's merger with Earth was halted well before the finale... Heck, even the Goblin Queen was defeated before that. Meaning the end game was played between just the X-men, X-Factor and... Mister Sinister.

I guess that explains this particular house ad... 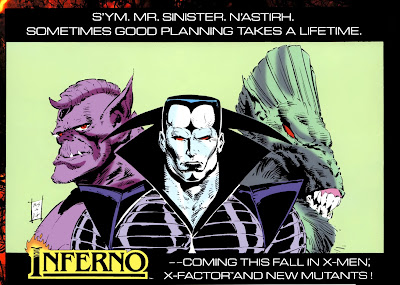 With S'ym and N'astirh vanished and gone, the X-teams faced Mr. Sinister in X-Factor # 39. It was the first time the mastermind behind the Marauders, among other threats, fought Xavier's children head on. In an added, sadistic twist, their confrontation took place on the site of Professor Xavier's wrecked school for gifted youngsters...

One by one, the X-men and X-Factor tried to take down Sinister and the Marauders' leader Malice, who was still in control of Polaris. They didn't exactly have the best of luck, Sinister brushed off most of their assaults... And when Rogue tried to take him out by draining his essence... This classic example of reverse mind control happened. 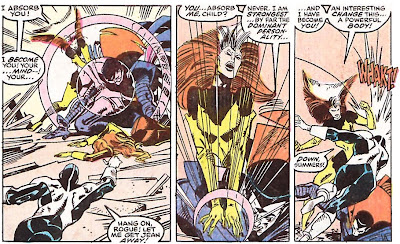 "YOU... absorb me, child? Never. I am strongest... by far the dominant personality...
And I have become YOU!"

Yup, Sinister's physical form may have been incapicated, his mind is in control of Rogue's far more powerful form. He takes over her mind and knocks out Cyclops, who he's had a special interest in from the get go, which readers of Classic X-men (or this blog) already knew.

"On your knees to me, your master!"

Bless Sinister for posing like a cheesy 1950's movie villain... But he wasn't too wrong, after all he'd been subtly influencing young Scott Summers from the moment he was unfortunate enough to end up in an orphanage run by Sinister.

The master villain immediately realised Scott's genetic potential and just how he could put it to his advantage... But what's the one rule of creating a super weapon? Why, making sure you can't be harmed by it's effects, of course!

And in Scott's case, it involved a fair bit of mind control.

The Inferno crossover revealed it wasn't professor Xavier who first came up with the ruby quartz glasses that kept Cyclop's optical blasts in check... It was Sinister all along. For some reason, the seemingly omnipotent villain feared Scott's power and made sure he couldn't be harmed by it. 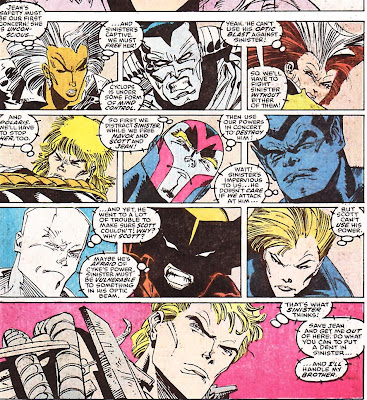 "Cyclops is under some form of mind control."

Storm was right... Or, as Rogue points out: he can't use his optic blast against Mr. Sinister. But leave it to the formerly mind controlled Havok, Scott's brother, to sort him out. After Jean uses her power to restrain Cyclops, Alex confronts his brother... And he's being a right diva about it. 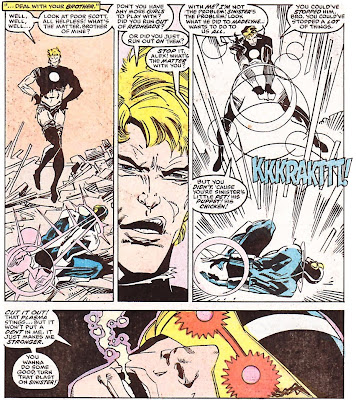 "Well, well, well... look at poor Scott, all helpless! What's the matter, brother of mine?"

Hitting his brother senseless didn't exactly help him snap out of it... But luckily, Scott was able to rid himself of his conditioning it when he saw this... 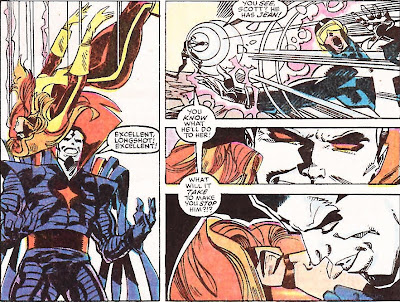 And that was enough to snap Scott out of his mind control madness. He rushed up to Sinister and took control... mostly by opening his visor wide... 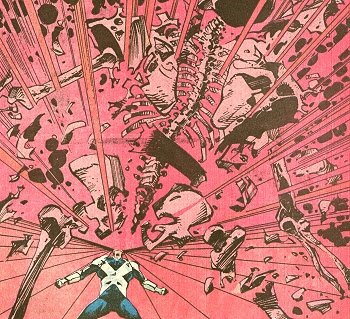 But I don't mind controlling my wise ass'ed ness. Why ruin the moment for Scott and co?

Posted by Clarmindcontrol at 10:30 PM