The Goblin Queen just might be Chris Claremont's most stereotypical creation ever. 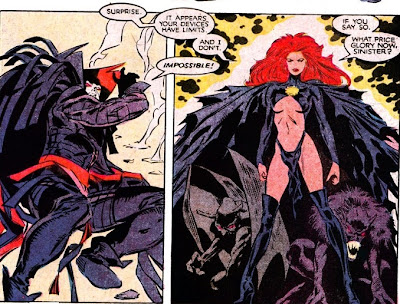 "It appears your devices have limits. And I don't."

Yes, the Goblin Queen is 'Claremont concentrate' when it comes to the way he writes villains and powerful women. A driven, determined and strong willed woman who wields considerable power and dresses provocatively in black leather... radiant in her glory all the way through.

Goblin Queen started out as Madelyne Pryor, the self reliant pilot wife of Cyclops who was also a dead ringer for Scott's first love Jean Grey. They shacked up, had a baby boy and then it all fell apart. Cyclops abandoned her, the Marauders tried to kill her, the X-men rescued her but before long she was forced to sacrifice her life in a fight against the Adversary...

After being revived by Roma, Madelyne stayed with the X-men, tending to the advanced computer systems in their new Australian base. Those systems showed her what had happened to her husband: Scott had joined the other original X-men into forming X-Factor... With Jean Grey!

Driven insane by jealousy, anger and grief... Madelyne slowly went down the path to become the fearsome Goblin Queen, after getting influenced by Limbo demons S'ymm and N'astirh. But before she put on the tattered, black thong bikini, she had already started to corrupt the X-men. 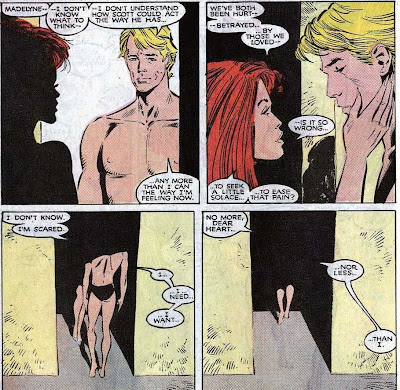 Madelyne slowly started to seduce Havok, better known as Scott's brother Alex Summers. On the eve before her ascension, she slept with him... Which would lead into a plot point later in the Inferno crossover. But before that, Madelyne had another score to settle... 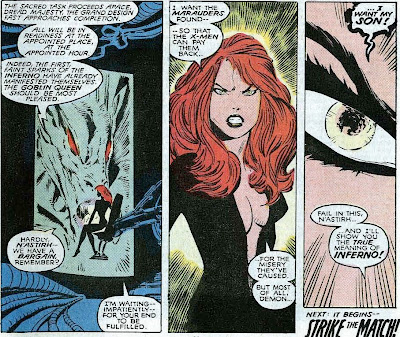 "I want the Marauders found... so that the X-men can pay them back..."

And in Uncanny X-men # 240, the X-men did just that. Sneakily teleporting into their base in the Morlock tunnels, the team proceeded to clean the villain's collective clocks. Their fight eventually moved to the surface and there... they noticed the city of New York was right in the middle of a demonic infestation... and the X-men weren't immune to its effects!

The Marauders were pretty much routed in Uncanny X-men # 241, when all of a sudden a new threat entered the scene... 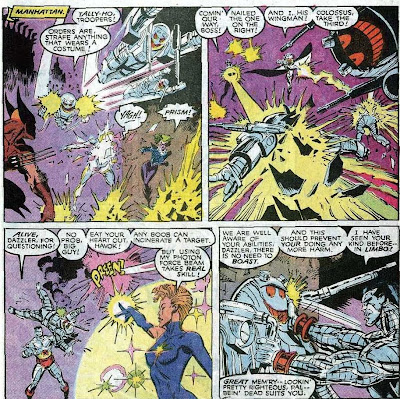 "We are well aware of your abilities, Dazzler. There's no need to boast." 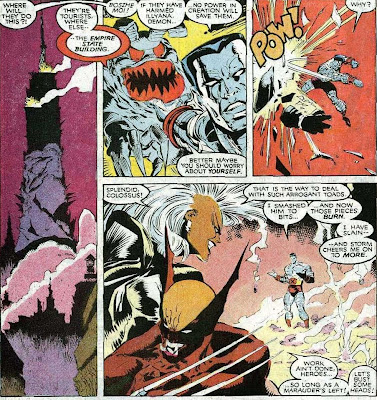 Storm and Wolverine are already falling prey to the Inferno lit by the Goblin Queen. The other X-men share their fate, slowly giving in to their nastiest, most undesirable impulses... Like when Longshot tries to make love to an anything but cooperative Dazzler. 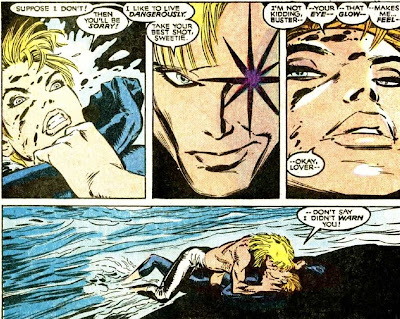 Yes, they all succumbed to the madness of Maddie's Inferno. Everyone, except Colossus...

Colossus lumbers off by himself, eventually playing a part in the New Mutants chapters of the crossover, before returning right in time for the finale.

Speaking of which, when next we see the X-men, they've met X-Factor for the first time. There's quite a bit of distrust between the two teams, not in the least because the X-men have been fully consumed by the Inferno...

All that right around the same time the Goblin Queen finally makes her appearance as well, as we'll see in part III of Madelyne's Mean Mind Control: X-tracting The Worst.

Posted by Clarmindcontrol at 12:23 AM