In today's entry, the X-men are about to meet the alien parasitic race known as the Brood, but before that, they have to deal with Charles Xavier. He isn't doing so well. 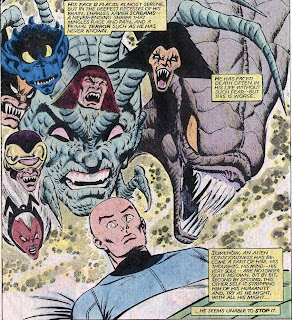 That's an understatement, if ever there was one. Back in Uncanny X-men # 158, Charles tried to telepathically contact Kitty Pryde and Nightcrawler when he discovered something was wrong deep inside himself. At the time, no one knew he had sensed the growing Brood queen embryo, a creature so vile and horrifying touching its mind was enough to throw Xavier into a coma.

Back then, no one knew much about the Brood. They had served as Deathbird's henchmen in a plot against her sister Lilandra. The Brood fought the X-men and kidnapped Charles and Lilandra, probably implanting the egg behind the scenes in issue # 156. 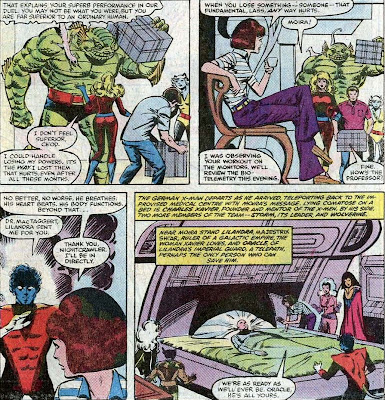 But because no one knew they were about to do a sequel to Alien without Sigourney Weaver, the X-men took Charles to their base in the Bermuda triangle. There, in spite of Moira MacTaggert's best efforts, he remained completely unresponsive to any and all outside stimuli.

In the old days, Jean Grey would have been able to telepathically connect with him, but she died on the Moon. That's why, in a clever piece of writing on Claremont's part, Shi'ar princess Lilandra called in the help of Oracle, the Imperial Guard's chief telepath. 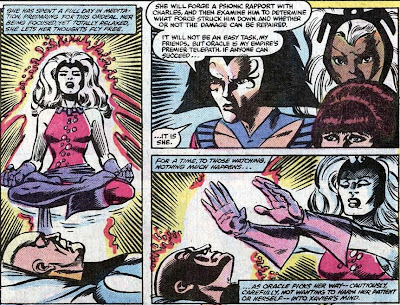 "Nothing much happens... as Oracle picks her way, cautiously, carefully... into Xavier's mind."

Ignoring the fact that Dave Cockrum basically gave Oracle the same face, hairdo and headband as Storm... the alien telepath soon made a connection with Charles' mind and the images she was bombarded with were a bit more... intense... than she might have bargained for. 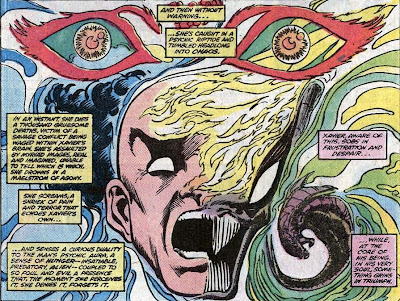 "A curious duality to the man's psychic aura. A sense of hunger... insatiable, predatory, alien... coupled to so foul and evil a presence that the moment she perceives it... She denies it, forgets it."

In retrospect, it seems so clear that Xavier was turning into a Brood. But remember, the gruesome truth of this already rather obvious picture wasn't known. And having Oracle instantly forget what she'd learned, kept the others in the dark as well.

Plus, they had another threat to deal with anyway... Oracle herself. 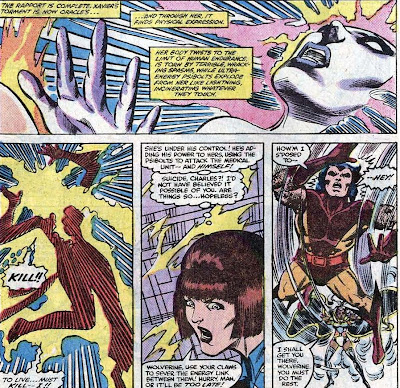 "She's under his control! He's adding his power to hers, using the psibolts to attack the medical unit... and himself!"

Realising he was fighting a losing battle, Charles used his psychic rapport with Oracle to take over the young telepath's mind and force her to attack his helpless body. In effect, he was committing suicide, prefering death over eventually turning into a host body for the Brood.

So, just like he'd done once before during the X-men & Micronauts limited series and years later in Grant Morrison's New X-men, Charles is ready to kill himself for the greater good.

Also, having the mind controlled Oracle scream "KILL! To live... Must kill...I!" While it's generally assumed this was Charles' desperate attempt to tell his students what he was doing, consider this: it might also have been the Brood embryo pleading its case. In order to live, it had to kill as well.

Whoever was behind the wheel didn't succeed anyway. Wolverine's adamantium claws rather conveniently severed the mental connection between Oracle and the professor. Xavier slumped back into his coma for three more issues, finally waking up in # 161 after reliving his memories of meeting Magneto and fighting Baron Strucker over his nazi gold.

"Professor, you're awake! You're all right!"

The fact he woke up at all is a clear sign the Brood egg had gained the upperhand. Charles put himself in a coma to protect himself and his students. Waking up while the embryo was still inside, indicated he had lost and didn't even know it himself.

Unfortunately, that was just the start of unknowing X-men with Brood embryos inside them, as we'll see in part II of Subtle Brooding: Embry-whoa! 'tcherdoin' there?

Posted by Clarmindcontrol at 7:40 AM