Legion Lost Part II: Charles Xavier You *ARE* The Father!

When we last left the New Mutants, they had accompanied their mentor Charles Xavier to Moira McTaggert's mutant research lab on Muir Island. One of her patients, an autistic boy called David, had accidentally put Tom Corsi and Sharon Friedlander into a coma and Charles was asked to help out.

When Moira and Wolfsbane suffered a similar fate before the end of New Mutants # 26, that gave Xavier a lot to do ánd recap at the beginning of # 27. 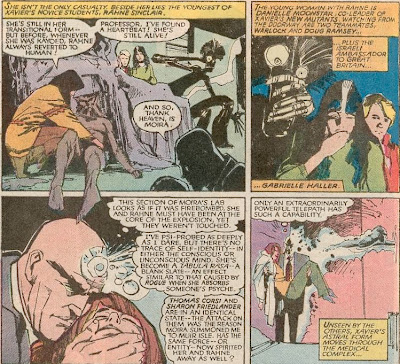 "Only an extraordinarily powerful telepath has such a capability"

Isn't it funny how intelligent people can be oblivious to the obvious at times? David is the son of Charles' former lover Gabrielle Haller... and now turns out to be a powerful telepath. You'd think Xavier would put two and two together, right? He doesn't... not until he finally, with the help of Mirage, enters the astral plane to look for Rahne and the others. But first, we're treated to this delightfully creepy tidbit... "WOW! Professor, you look fantastic! I never dreamed you were such hot stuff!"

Here we have a 14 year old girl basically telling her teacher he has a nice ass. Can't blame her for being surprised, after all he was in a wheelchair for most of the time she's known him.

Anyway, while it looks like Wolfsbane is approaching them, it's actually a psychic illusion that tears into Xavier and Dani, before bursting into flame. Meanwhile, in the real world, the flames appear around their bodies, shocking Doug Ramsey and Gaby Haller... right before sucking them on to the astral plane as well. Because... well... because.

Shocked and tired of being toyed with, Charles brings the full range of psi talent to bear and bluntly tears into the walls around David's mind, hoping to break through. This causes the boy considerable pain, and as he cries out, his true face ánd an obvious truth is revealed... 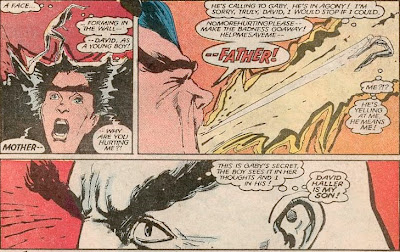 "This is Gaby's secret, the boy sees it in her thoughts and I in his. David Haller is my son!"

No duh, Charles... look at the size of those bushy eyebrows Bill Sienkiewicz drew on the kid... Apparently, it's a hereditary trait.

After breaching his mental wall, Xavier tried to bring the others into David's mind... but he got surprised by how quickly the boy's defenses were being rebuilt and lost most of them as they tumbled down into his mindscape. Holding on to Gaby, Charles literally came face to face with the people who ran David's head... 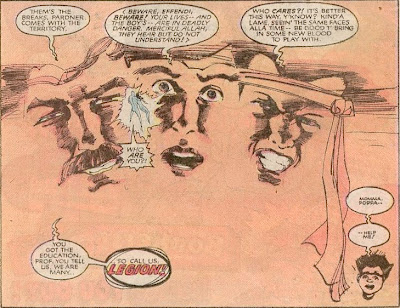 You have to feel sorry for the little boy on the far right. No way this child is able to deal with the three adult personalities vying for control over his body. He wants to be good, but he can't help doing bad. But now his parents were there to help... unfortunately, they weren't in the best of shape. Gabrielle was unconscious and Charles was still suffering from the severe injuries he received after a beating in Uncanny X-men # 192.

Xavier pushed himself and Gaby into David's mind. But the effort proved too much. He passed out and when he came to, he was alone and a little disoriented by what he saw... 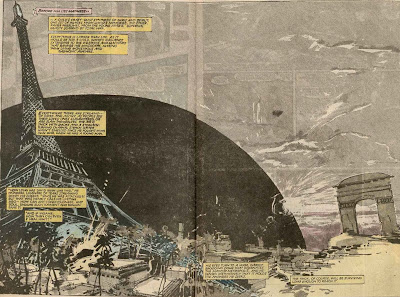 A dark, disturbing amalgam of places the boy had been to, with a mysterious, seemingly impenetrable black dome dominating the scene. Sienkiewicz's abstract tendencies really sold this premise, giving the inside of David Haller's autistic mind a true sense of alienating weirdness.

And that was before Charles even met the many, curious inhabitants... Like a curious telepathic Arabic man and... Jack Wayne. 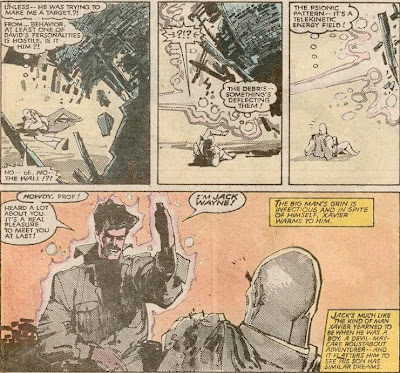 "The big man's grin is infectious. And in spite of himself, Xavier warms to him"

But it's not like they have too much time getting acquainted, because the mind of David Haller is like a war zone in more ways than one.  Xavier gets chased by black helicopters with gatling guns, and Jack is the first to explain to him what was going on... 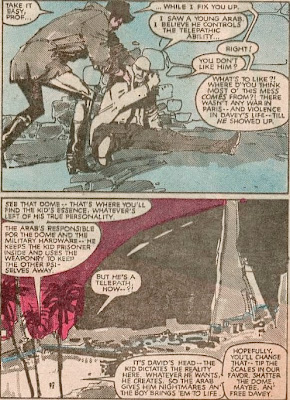 "See that dome... that's where you'll find the kid's essence, whatever's left of his true personality. The Arab's responsible for the dome and the military hardware... he keeps the kid prisoner inside."

That's enough to convince Xavier he needs to penetrate the black dome and with Jack's help he sets out to do just that. Meanwhile, in another part of David's mind, Moira McTaggert, the New Mutants and Gabrielle Haller meet the same young Arab that Charles ran across, but Gaby's reaction to the man is rather explosive.

Turns out he was part of a Palestinian terroristgroup that attacked Gabrielle, her lover Daniel Shomron and David, killing Shomron and traumatising the young boy into his current autistic and catatonic state. Ignoring for a second that autism isn't triggered by trauma, it's obvious Gabrielle is more than a little ticked off at this terrorist.

But he disappears before she can catch up with him, just as a young punkish girl makes her first appearance... 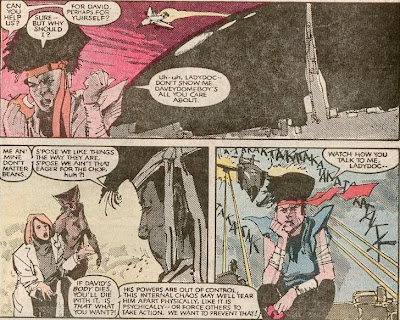 Meet Cyndi, another one of David's made up personalities. While Jack Wayne controls the boy's telekinesis, she possess his pyrokinesis... In other words, she can set things on fire. Heck, in all likelihood her name is derived from 'incendiary', which means 'capable of causing fire. She also has a fiery personality, a typical teenager distrustful of any and all authority figures, preferring chaos over boring, adult order. She's also the one who torched Moira's lab...

But Dani Moonstar has bigger concerns, not to mention questions for Gaby Haller. 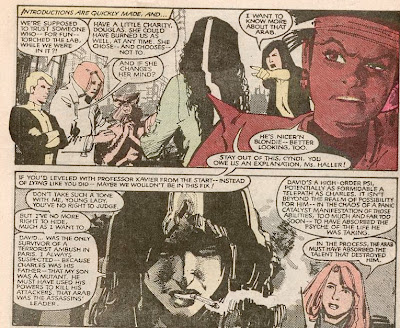 "I want to know more about that Arab."

You gotta love how innocent the mid 80s were, in retrospect, Nowadays, refering to someone as 'that Arab' has an ever so offensive ring to it. But here we have Gabrielle Haller, smoking in her astral form by the way, explaining how 'that Arab' terrorist attacked her and her family in Paris.

Gaby finally decides to come clean about her son. She always knew he was Charles' child and that he had mutant potential. Witnessing the terrorist attack as a young boy, triggered his enormous psionic powers before he was ready to use them.

This caused David to fully absorb the Arab assailant's mental being into his own, which caused his autism and the formation of split personalities like Jack and Cyndi to help deal with a trauma he couldn't grasp at that age...

While Gabrielle is filling in the New Mutants, the professor is getting briefed by Jack Wayne, who has a slightly different take on the Arab's influence on David's mind... 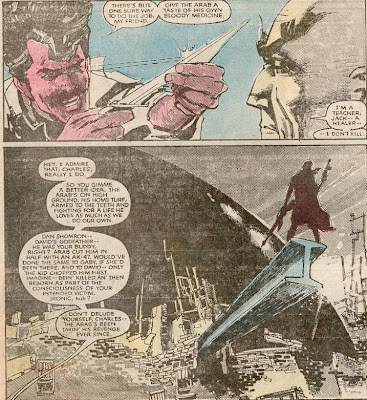 "Imagine... Bein' killed an' then reborn as part of the consciousness of your intended victim.
Ironic, huh?"

Basically, Jack tells Charles that 'the arab' is holding his son prisoner and expanding the black dome to increase his control over the boy's mind. If he isn't stopped, it won't be long before David completely disappears and a murderous terrorist is allowed to run the show inside the head of an extremely powerful psionic mutant.

Handing Charles a knife, Jack dares Charles to end it... If he has the guts for it. Accepting the weapon with grim resolve, Xavier ends the issue with a classic 1980s action movie tagline... "Let's go!".

Just how all this will end is answered in the third and final chapter of Legion Lost: Sole Soul Survivors
Posted by Clarmindcontrol at 11:09 PM