Anyone Mind Questprobe Taking Control part I: If I Mae Ask, Is That A Joystick In Your Pants*... 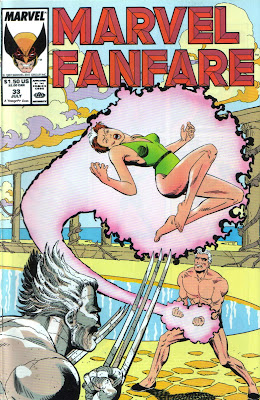 Today's entry couldn't be any more 80s if it tried... Consider this: what did just about every 80s kid love beside Marvel comics? Why, videogames of course!

So, why not combine the two and rake in the dough. Nowadays, with the Marvel movies dominating the cinema, having superheroes star in their own games is a no brainer. But it all started back in the mid 80s with Questprobe, a videogame series that incorporated actual Marvel heroes... in all their kinda 8-bit glory...

The guy in the middle with the purple gown and the Mysterio style headgear is the Chief Examiner. First appearing in comics in August of 1984, the Examiner's deal is to test Earth's heroes in order to determine whose powers are best suited for the defense of Scadam, his recently invaded home planet. By pitting hero against hero or villain and copying the victor's powers, the Examiner planned to form the perfect army.

As origin stories go, you could do worse. But if the Chief Examiner had truly investigated Earth's heroes, he'd have noticed their uncanny ability to lend a hand to just about every other race that came looking for help. Why not take everyone you can find?

Still, that tidbit of logic didn't stop Marvel from launching the Chief Examiner into his own series... It only lasted a handful of issues, yet he observed fights between Hulk and the US Army, the Human Torch and the She-Hulk and Spider-Man and his lookalike Mysterio.

And then the series got cancelled. Because, well... having heroes and villains fight isn't that original and if you wanted to see most of the then current crop of bad & good guys duke it out in 1984, you'd just be better off buying Secret Wars. But no one told Chris Claremont, June Brigman and Terry Austin who produced an issue of Questprobe that never saw print. That is, until editor Archie Goodwin decided to run the story in 1987's Marvel Fanfare # 33.

By then, the status quo of the X-men and New Mutants had significantly changed. On the run, severly wounded after the Marauders and the Morlock massacre... Seeing them in their relatively carefree 1984 surrounding, on Magneto's Bermuda triangle island, was a welcome change of pace. Apart from the mind control, of course... 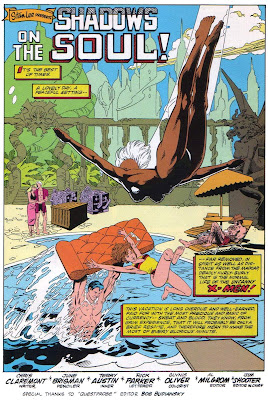 Yeah, such relative peace and tranquility never lasts too long. But even in 1987, it's nice to revisit the relative innocence of those three, short years gone by. Shadowcat and Colossus were still an item, as were Magneto and boat captain Aletys Forester, despite her ever so brief fling with Cyclops that led to her first meeting with the mutant master of magnetism.

Unfortunately, Storm wasn't the only X-man who fell prey to this. Magneto watched helplessly as Colossus, Kitty, Wolverine and the others were turned to statues as well. Luckily, Rogue wasn't on the island when all this went down... That's why she was on hand to do this... 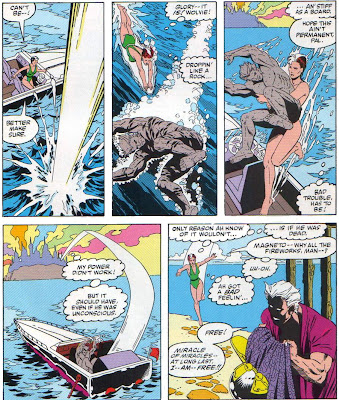 Somehow, the Chief Examiner had been able to gain control of Magneto's mind. What better way, after all, to defeat the cybernetic creatures dominating your homeworld than by possessing a mutant capable of controlling, disrupting or bending all things metallic to his will.

Unfortunately for the Examiner, Rogue was still there, ready to stop him. But she didn't really have the best of luck... 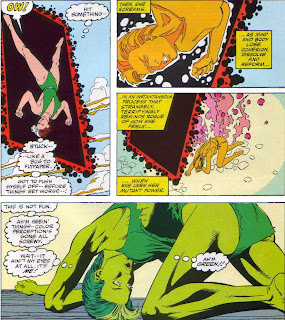 So, after hitting the portal Rogue involuntarily took on the shape of the She-Hulk, unknowingly absorbing part of the jade giantess' essence already 'borrowed' by the Chief Examiner...

And that's just when the fun really began. Check back next time for part II of Anyone Mind Questprobe Taking Control: Ghosts In The Machine.


* Free after Mae West's infamous line from the 1933 movie She Done Him Wrong.
Posted by Clarmindcontrol at 2:56 AM