Ever had an epiphany?

A sudden, all encompassing moment of absolute clarity that made you see a certain matter in a totally different light? 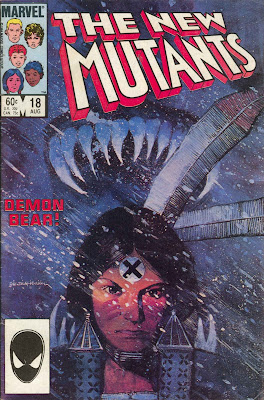 Yours truly experienced one when rereading the Demon Bear storyline from New Mutants. What was the revealed truth, you wonder? Well... quite simply put: Bill Sienkiewicz *is* a great visual storyteller.

Sienkiewicz joined Claremont on New Mutants with issue # 18, which was also the start of the Demon Bear threeparter. Bill's heavily inked, at times almost abstract and extremely imaginative style was a far cry from the more conventional look of his predecessors Bob McLeod and Sal Buscema. For instance, this is how Buscema drew the Demon Bear on the final page of # 17. 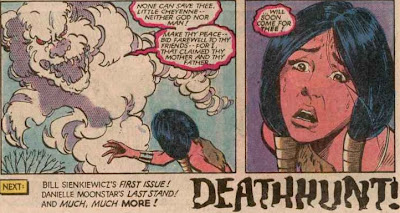 "None can save thee, little Cheyenne... Neither God or Man!"

Poor Dani... suddenly being confronted by the demonic creature that killed your parents is pretty horrific. And even though he looks like little more than a whisp of cloudy smoke with a heavy voice, knowing something evil is out there gunning for you is rather unsettling. Still, how bad could fighting a cloud with teeth be, really? Let's see how Sienkiewicz imagined the Demon Bear... 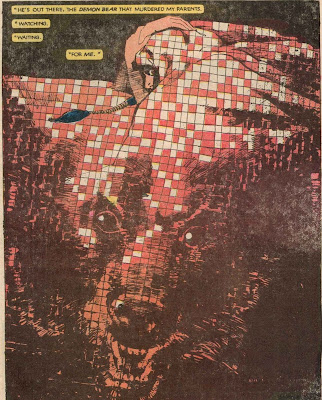 "He's out there. The Demon Bear that murdered my parents. Watching. Waiting. For me."

... Holy sh*t. Are you sure there's no monsters under my bed, mommy?

So that's what the epiphany was all about. As a younger reader, I absolutely hated Sienkiewicz' style. It totally destroyed the established bright, happy cartoonish vibe of the book, the characters didn't look or feel anything like the ones I'd read about in the past year and a half. This just wasn't New Mutants anymore.

How wrong I was. Yes, the art was a bit more challenging to grasp and had added layers and depth... Yes, the atmosphere was dark and moody and plain weird at times... But upon re examination, I realised how much Sienkiewicz' style added to the story ánd stimulated Chris Claremont to explore new territories as a writer.

Because, let's face it, the Demon Bear plot is basically the plot of every teen horror movie... A band of pubescent protagonists are chased and slowly picked off by a big, unbeatable baddie. Yet, this boilerplate storyidea gets elevated through Bill's work. His raw and powerful compositions, at times Kirbyesque in their sheer power, turn the pedestrian a true work of art.

Ow, and of course there was mind control!

# 18 was mostly set up, as Dani Moonstar felt the approach of the bear and spent hours in the Danger Room preparing for its arrival. She refused to involve her fellow New Mutants, because she felt honor and duty bound to deal with this threat to her family alone. That's why she went out to face it all by herself. 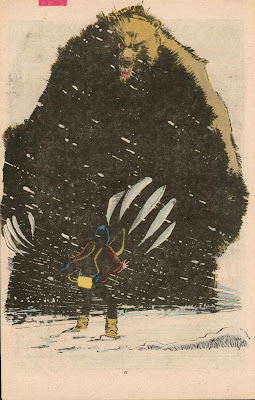 What are you worried about? She's got a bow and arrow!

Not to mention her mutant powers. When she used them to manifest the bear's greatest fear, she was shocked to learn the demon feared her most of all. But despite that apparent anxiety, the creature callously crippled her, leaving a mortally wounded Dani to die in the snow.

Of course, the New Mutants found her before it was too late. Still in the dark about what had happened to their teammate, they rushed Dani to Salem Center's emergency room where a team of doctors immediately wheeled her into the OR in a desperate attempt to save the 14 year old girl.

Blaming themselves for not picking up on Dani's weird behavior sooner, the team vowed to at least protect her from whatever evil she'd faced... Just in case it came back to finish the job. Only problem is, what or who do they have to be on the lookout for? That's where Rahne Sinclair came in... In her wolf form, the young girl shared a psychic bond with Dani, so even when comatose she should be able to tell Rahne what they needed to know... 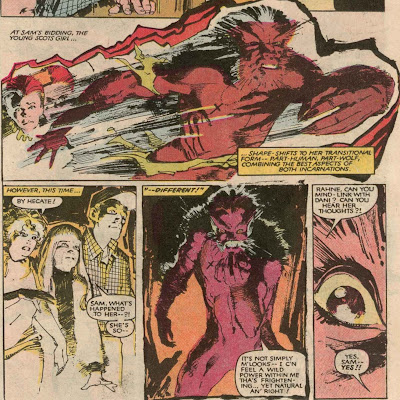 "It's not simply m'looks... I c'n feel a wild power within me tha's frightening... yet natural an' right!"

Affected by the Demon Bear's influence on Dan\ni, the prim and proper ultra religious Rahne had been transformed mind, body and soul into something far more feral. But the fun didn't stop there. Dani had told Rahne about the bear and his approach, which forced the team to scramble and create defenses.

With a codename like Magik and having 'ruler of Limbo' on your resume, Illyana was the go-to-gal for this operation. She used part of her life force to create mystical wards around the operating theater where Dani was fighting for her life. Despite all that, the bear still barged in and # 19 ended with this far from encouraging cliffhanger... 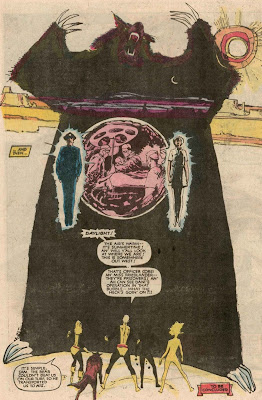 "The bear couldn't defeat us on our own turf, so he transported us to his."

Just look at that... the sheer symbolism of the giant black bear towering over the New Mutants while Illyana's protective wards shield the operating room from the creature's wrath... But who are the cop and nurse?

Meet Tom Corsi and Sharon Friedlander, two hapless and innocent bystanders who just happened to be at the hospital when the Demon Bear made its move. After the New Mutants beat him back, he decided to yank Corsi and Friedlander into his realm along with Xavier's youngest students...

But for what purpose? 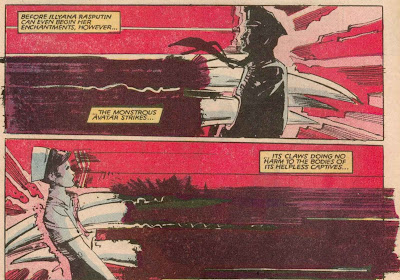 "The monstrous avatar strikes...its claws doing no harm to the bodies of his helpless captives..." 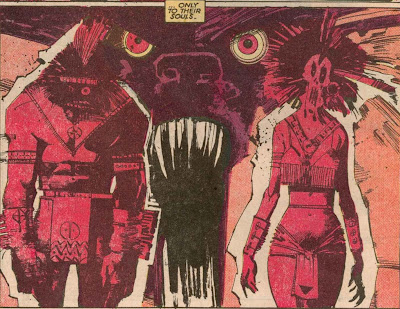 "Only to their souls."

Corsi and Friedlander, mind controlled by the Demon Bear, tried to kill the New Mutants so the Bear itself could focus on re-entering our reality and finish the job he'd started. The team was valiantly trying to hold their own against the Native American nasties... when this happened... 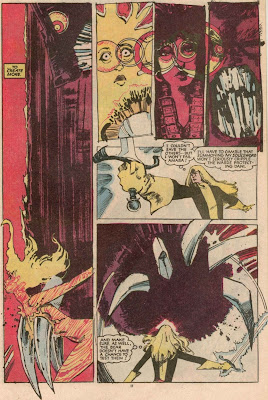 Just look at that page from New Mutants # 20... the visuals are so strong, all you really need to understand the story is watch the panels. The Demon Bear managed to get its claws into Magma, turning her into third mind controlled minion, while trying to claim Illyana as well... but thank heavens for her spellbreaking  soulsword. 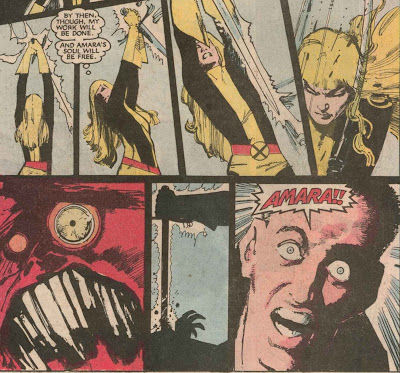 "And Amara's soul will be free."

Of course, seeing a teammate who parttimed as a demon queen stab the girl you love tends to make one act a tad irrational... And Sam Guthrie is no exception. Rocketing Magik away from Magma's 'corpse', he proceeded to call her every name in the book until Magma showed up to set him straight... 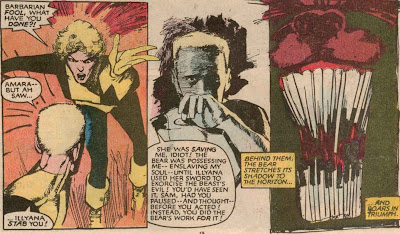 "The bear was possessing me.. enslaving my soul..."

These panels clearly show how Sienkiewicz's appoach to a scene was totally different from the way Buscema or McLeod would have handled it. Most likely, they would have shown Magma berating Sam, with him on panel looking properly embarrassed and/or chastised.

By seperating the two reactions, Bill is able to give both emotions weight and relevance, while reminding everyone about the threat... A demonic bear with lower teeth shaped like piano keys.

In the end, Illyana managed to use her soulsword to disrupt the Demon Bear's form and that, as they say, is that... Well, sort of... As everyone returned to Earth, Tom and Sharon discovered being kidnapped by the Demon Bear had turned them from Caucasian to Native American...

And as for the Demon Bear... 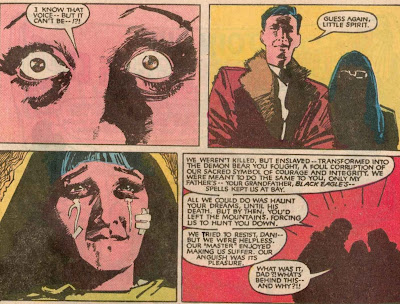 "We weren't killed, but enslaved... transformed into the demon bear you fought."

Remember the Little Red Riding Hood fairytale? At the end, the big bad wolf is cut open and Riding Hood and her grandma pop out alive and well. The Demon Bear had room for two people as well: Dani's parents.

A while ago, an ancient Cheyenne evil (eventually revealed to be the Adversary) claimed ma and pa Moonstar. They were turned into the Demon Bear and forced to kill their own family. But now they were fine, so all's well that ends well

Unless of course, you remember how the bear's biggest fear was Dani. And if the bear was actually her parents, doesn't that mean?

I've always thought Siencewicz was an odd choice for a comic that seemed to be (on the face, at least) a more young-adult-friendly comic. When I was little (in the 1990s) and I was looking through old bins of back issues, I always avoided his New Mutants like the plague because the art was so (to my eyes at the time) weird and dark. I can't have been the only young comic enthusiast to think that.

Yeah, very true David :-) Just like I said on the blog. Good to know I wasn't the only one too young to fully appreciate Sienkiewicz's style.

I had just the opposite experience. I avoided New Mutants initially because the art was bland and the stories seemed mediocre until Bill S took over. It was a shock to adjust to such a wild art style but it pushed Claremont in strange directions with the stories from then on and I became a regular reader.