Today's entry comes from the nine month period every Marvel comic had to get involved with Secret Wars II, which meant guest appearances by the Beyonder.

More often than not, the involvement of the one from beyond added little to the story. Some writers, like John Byrne in Fantastic Four, used the entity to further the ongoing storylines.

Either way, the Beyonder is basically just a tool. And a big one at that. 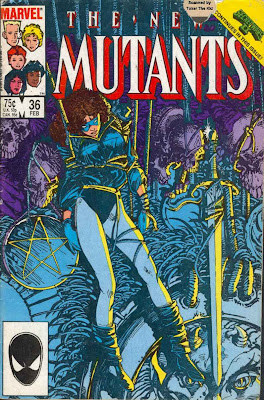 Chris Claremont managed to get at least some mileage out of the Beyonder over in New Mutants. Take issue # 36, in which he paid a surprise visit to Illyana Rasputin who was riding the subway in New York right when he popped in. 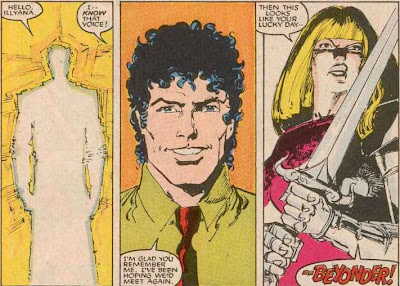 Naturally, the teleporting ruler of Limbo was ready to attack... But she didn't stand a chance. Luckily for her, he didn't want to hurt her. No, quite the opposite: he came to help her. 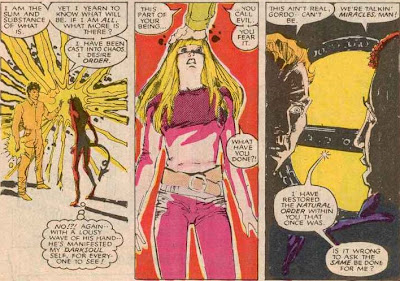 And with good reason... Illyana lost parts of her soul to Belasco's bloodstone ritual. This gave her incredible magic powers, but she also lost part of her humanity in the process. Now, the Beyonder undid Belasco's handiwork and made the young Russian mutant whole again. Gone were her eldritch armor, soulsword and beatrice medallion...

But magic is a form energy... And energy can't be destroyed, it just exists in another form. Or in this case, another host. When the Beyonder removed the magics from Illyana, all her trinkets appeared on a rather shocked Kitty Pryde who was doing a little studying in New York's public library. Immediately recognising the armor, sword and pendant as Illyana's, she didn't have much time to adjust when a demon popped out of thin air and attacked her. 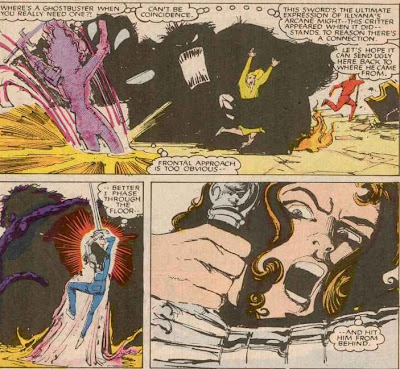 "Where's a Ghostbuster when you really need one?"

While Claremont has Kitty think to herself in full detail just what the soulsword is (you're welcome new readers!), artist Bill Sienkiewicz once again knocked over his ink well to give the demon a distinctive, creepy appearance. But Kitty wasn't the only one dealing with a sudden increase in demonic activity... 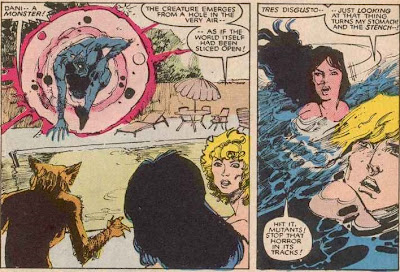 The New Mutants quickly deal with their uninvited pool guest and then... Illyana comes home... Using the subway. 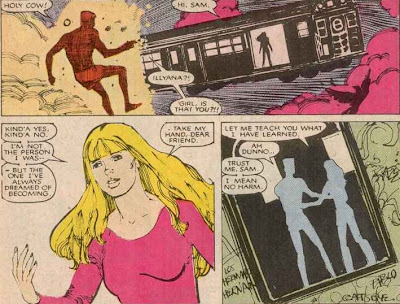 "Take my hand, dear friend. Let me teach you what I have learned."

Apparently, Illyana also learned how to lift an entire metro train into the air and fly it over 40 miles to Westchester. Still, ignoring this super power we'll never see again... Illyana shares her 'insights' with Cannonball and meets the others after landing the subway train on the mansion's lawn. 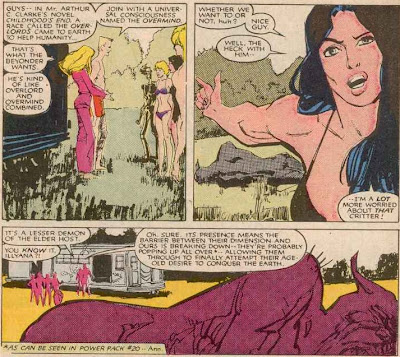 "Join with a universal consciousness called 'the overmind'."

Illyana tells the New Mutants she wants them to join the Beyonder's cause, after all he has the best intentions for mankind... But the team is a little more concerned with their unexpected demonic visitor. Especially after Illyana rather casually identifies it as part of a large scale demonic invasion... And to think Inferno was still at least two years in the future at that point.

Surprisingly enough, Illyana's response is a rather glib 'no big deal.' According to her, these demons pale in comparison to the Beyonder so who cares. She's far more concerned with recruiting the New Mutants for the Beyonder's cause. All she has to do is touch them to make sure they see the light... 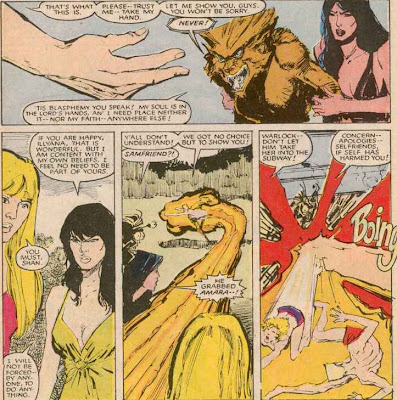 "Y'all don't understand! We got no choice but to show you!"

None of the New Mutants were too eager to have Illyana show them this new truth of hers. Karma was especially vehement in her refusal, which is understandable considering she'd only recently regained control of her body after the Shadow King mind controlled her. 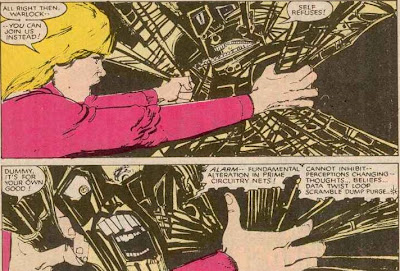 For those who aren't fluent in mid 80s made up computer lingo: Illyana was trying to mind control the techno organic mutant Warlock.... And she would have succeeded too, if not for the fact a giant black demon (there goes Sienkiewicz's ink well again) showed up at the mansion, carrying an old friend... 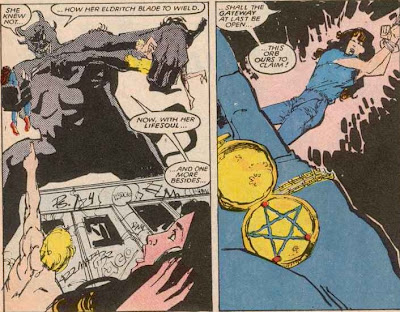 "Now, with her lifesoul... and one more besides... shall the gateway at last be open..."

Yeah, poor Kitty. Even though she had 'inherited' all of Illyana's magical artifacts, she lacked the necessary skills to use them effectively. Now, she'd fallen prey to the demons who were planning to finish Belasco's bloodstone ritual and merge Earth with their dimension. And of course the New Mutants tried their best to stop the creature...

Mutants, stop him! Shan, can he be possessed?!"

It's a quintessential panel of Claremont's New Mutants and the way they approached a combat situation. Wolfsbane's on the frontlines clawing away at the demon's foot, while Dani Moonstar and Xi'an 'Shan' Coy Manh use their mental powers to inflict their own particular brand of mental domination.

While way in the back, Doug 'Cypher' Ramsey is feeling useless and a bit scared because a) he's halfnaked and b) being a mutant universal translator make him pretty much worthless in actual combat... a cipher if you will...

In the end, the demon appears impervious to the New Mutants's powers. How can one scare, scratch or burn a creature from a hellish dimension, after all. No, it's up to Illyana to save the day by willingly embracing her evil once more... 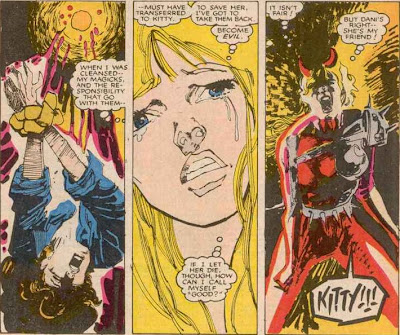 "To save her, I've got to take them back. Become evil.
If I let her die though how can I call myself 'good'?"

Chris Claremont confronts Magik with an interesting no win situation. Illyana truly wants to do good, but what does that mean in this case? Either she embraces her demonic side in order to save her best friend, or she lets Kitty die so she won't be the 'Darkchylde' anymore... But can anyone who stands idly by and watches a fellow human being die truly be considered good?

In the end Illyana took back what was hers, cast aside the Beyonder's gift of a 'normal' life and rescued both Kitty and every single person on Earth from getting devoured by demons... And all it took was her own life and personal shot at happiness... 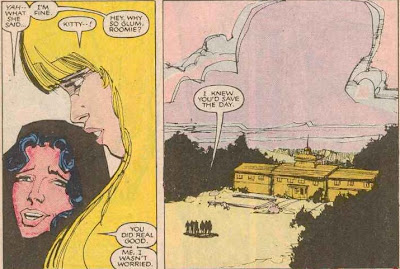 With one demon invasion stopped and one best friend saved, it would seem Illyana made the right choice. Even though 'right' is all but relative. Considering what happened in New Mutants # 71... 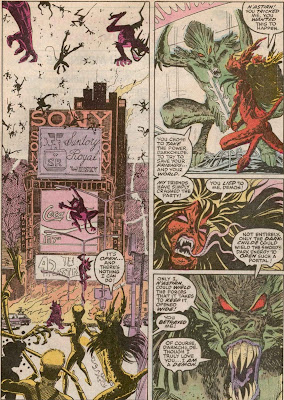 Would the life of Kitty have been worth preventing Inferno, the demonic infestation of New York city that killed dozens of innocents?

Posted by Clarmindcontrol at 8:53 PM