Mind The Concealed Controller part I: Tullamore's Mind's A Mess

Today's entry revisits Chris Claremont's 2000 run on Uncanny X-men and the early misadventures the mutants had, fighting their mysterious new foe: The Neo. 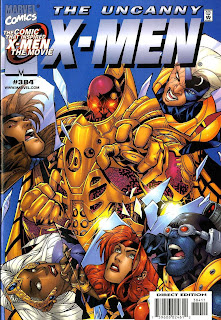 The Neo actually consisted of quite a few subgroups. Apart from the main clan led by Domina, the team also encountered the Shockwave Riders, the Lost Souls, the Goth and in Uncanny X-men # 383... meet the Crimson Pirates. 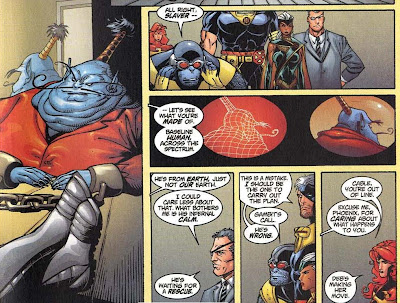 This rather obese blue refuge from an alternate dimension is actually a slaver, who tried to profit from trading Russian mutants all across the omniverse. The X-men had already put a stop to that business an issue earlier, but now they wanted to know just who he was working for.

Conventional interrogation methods were getting them nowhere, and and this was well before 9/11 okayed the use of 'enhanced interrogation techniques' (though if you waterboarded a blue guy, who can tell the difference)... So they figured the best way to learn what's on his mind is to, well, go inside his mind.

Despite Cable's misgivings, Phoenix volunteered for the job.

"My telepathy will allow me to do virtually anything..."

Famous last words, Jean... Because inside Voge's mind, there just might be (Tulla)more than you can handle. And the first surprise is that inside Voge's head, she encountered Wolverine, of all people. 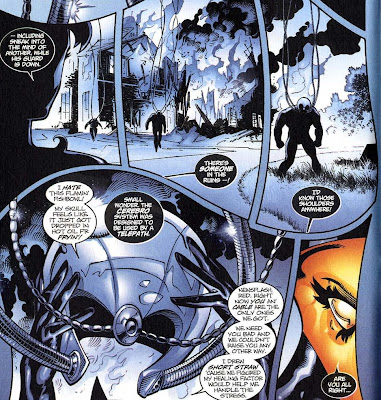 "I hate this flamin' fishbowl! My skull feels like it just got dropped in hot oil f'r fryin'!"

Yeah, let's call it an (unfortunate) coincidence... But the second Jean used her telepathic powers to conduct her investigation into the villain's mind, she's also contacted by Wolverine via Cerebro.

He just 'called' to give her an update on the Neo his team of X-men had been facing back in New York. But their little reunion is cut short when Voge realises someone's been using his mind for a conference call. 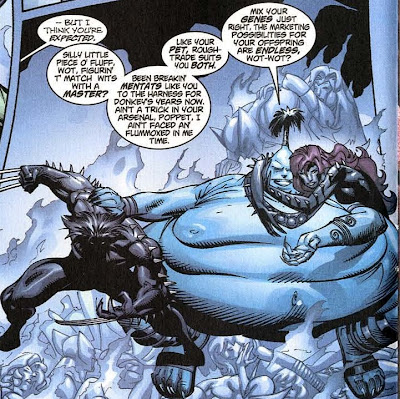 "Silly little piece o'fluff, wot. Figurin' t'match wits with a master?
Been breakin' mentats like you to the harness for donkey's years now."

For those of you not fluent in what appears to be an interdimensional take on cockney English, Voge is rather unimpressed with Jean's telepathic prowess and he plans to bend her and Wolverine to his will. He figures the combination of their genetic potential (i.e: kids) could be very profitable...

All the more reason to turn them into his slaves. Heck, he'd already constructed their new identities as his mindless Hounds. If those creatures beat Wolverine and Jean, they'd be taken over permanently.

Jean wasn't having any of this and took swift action. Just as Wolverine was getting transformed into a Hound (apparently he was already pretty close to one anyway), Jean pushed Logan out of Voge's mind and back into his own body, keeping him safe. 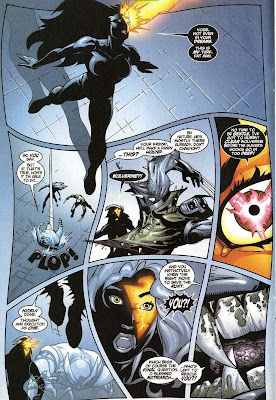 "Which begs of course the final question, o blessed matriarch... Who's left to rescue you?"

The mysterious fanged bad guy with awful dental hygiene makes a good point. But before we go into the question who he is, let's see if Wolverine survived the trip back from the astral plane. 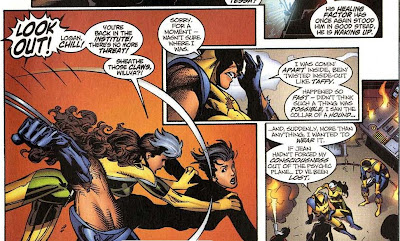 "I was comin' apart inside, bein' twisted inside out like taffy. Happened so fast, didn't think such a thing was possible. I saw the collar of a Hound...
and suddenly, more than anything, I wanted to wear it."

So, Wolverine narrowly escaped getting mind controlled... But back in Russia, Jean was still trapped inside Tullamore Voge's mind. Her body had collapsed, which made the X-men more than a little suspicious and convinced Cable he'd better follow her in to see what was wrong. Upon arrival, he got a pretty good clue who the mystery mind mucker is... 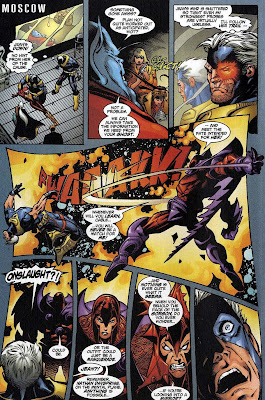 "When you behold the face of the Gorgon, do you ever wonder if you're looking into a mirror?"

In a clever bit of misdirection, Cable thought he was facing both Onslaught and Jean herself. But he was actually facing, of all people, Stryfe. This was never revealed in the issue itself, Claremont planned to use Cable's clone turned master villain in future storylines... Unfortunately, he was taken off the book before anything could come of this.

But while all this was going down on the astral plane, the X-men were under attack from this new band of Neo calling themselves the Crimson Pirates. They had come to free Tullamore Voge, which was something the team simply couldn't allow. They stood ready to take them on, even Cable had returned to his own body... Or had he? 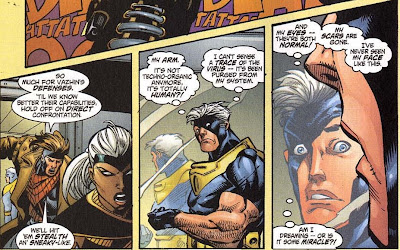 "I can't sense a trace of the virus... it's been purged from my system. And my eyes... they're both normal! My scars are gone. I've never seen my face like this."

Yeah... In retrospect, it's pretty obvious Claremont was already writing Stryfe here. From his earlier comment to Jean, refering to her as 'matriarch' (after all, Stryfe's birth mother was Jean's clone Madelyne Pryor) to his comment to Cable about looking into a mirror. But clone and original were about to get even more intimately involved...

During the fight against the Crimson Pirates, 'Cable' suddenly switched teams... 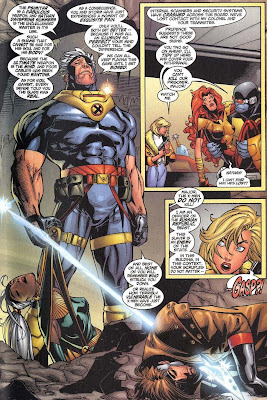 "The Psimitar is a fabulous weapon and Nathan Dayspring Summers is the unchallenged master in its use. Such a shame the same cannot be said for his soul and for his body!"

Which is a rather wordy way of saying... Cable's mind has been taken over, which is something Storm and Gambit realised a bit too late. The Crimson Pirates then proceeded to free Voge and planned on capturing all the other X-men to use as their mindless pawns. However, Beast and Phoenix managed to run away to fight another day.

This conflict would be resolved a month later in Uncanny X-men 385, as we'll cover in part II of Mind The Concealed Controller: Neo-thing New, Really...
Posted by Clarmindcontrol at 10:09 PM