Brand New Brood Control part III: It's Not Just The Power Of Christ That Can Compel You...

The Brood saga ended in Uncanny X-men # 234, a comic with a cover so shockingly disturbing to kids, yours truly couldn't bear to look at it without getting nightmares... Well done, Marc Silvestri. 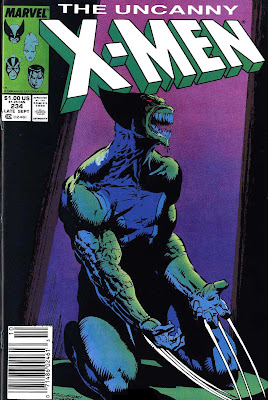 The X-men had been fighting medic Harry Palmer, who had accidentally been infected by the Brood. By the time the team tracked him down, Harry had implanted several mutants with Brood eggs as well, which made dealing with this particular Brood incursion a bit more of a challenge.

After their initial encounter, the X-men had lost both Psylocke and Rogue to the Brood, while Wolverine had been implanted with a Brood embryo. So things weren't looking too hot for the team when the fight moved to the scene of a giant outdoor church event led by reverend William Conover. For once, a religious figure who isn't against mutants. 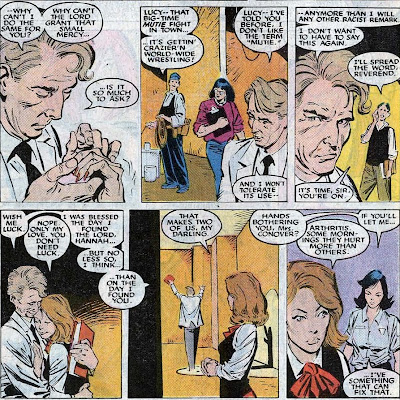 "If you'll let me... I've something that can fix that"

By the way, that paramedic offering to help Hannah Conover is Josey, colleague and partner to Harry 'Brood Embryos For Everyone!' Palmer... What a coincidence! Guess it *is* a small world after all, right? Speaking of the Brood, let's check in on Temptress, a pheromone fuelled mind controller who managed to snatch both Rogue and Wolverine. 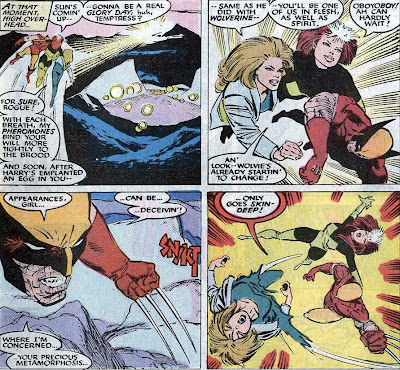 "With each breath, my pheromones bind your will more tightly to the Brood. And soon, after Harry's implanted an egg in you...same as he did with Wolverine... you'll be one of us in flesh, as well as spirit."

After a sales pitch like that, all Rogue can say is: "Ohboyoboy! Ah can hardly wait". Unfortunately for her, Wolverine's metamorphosis was being hindered by his healing factor, just like it had during the previous Brood arc.

Incensed after watching him kill Temptress, a still clouded Rogue threw Wolverine to the ground and raced back to Harry Palmer and the others, who were trying to get away from the other X-men by car. But Storm, Colossus and the others put a stop to that. finally caught up with them. 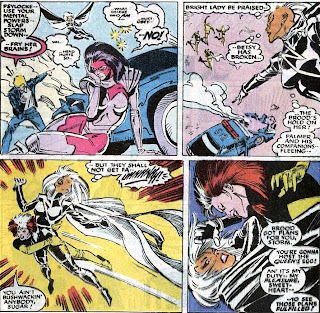 "Brood got plans for you, Storm... You're gonna host the Queen's egg! An' it's my duty... my pleasure, sweetheart... to see those plans fulfilled!"

Luckily for Storm, she was saved by a well timed laserblast, courtesy of Dazzler. The Brood escaped by foot, heading towards the religious convention led by reverend Conover... Who was already entertaining a most unexpected guest... 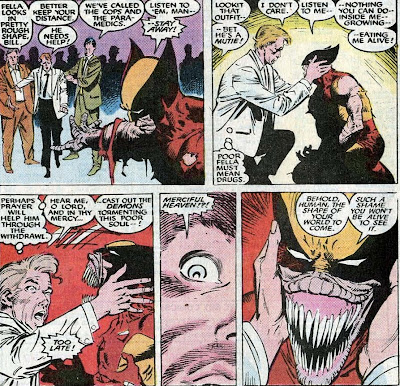 Yeah, that's a nasty dose of MGH, to be sure. Usually, Logan's healing factor would have gotten rid of the egg with some effort. But Wolverine suffered additional severe injuries from his involuntary sky diving without a parachute incident. This meant his powers had trouble keeping up, allowing the rapidly maturing Brood embryo to gain the upperhand. But the reverend kept on praying... 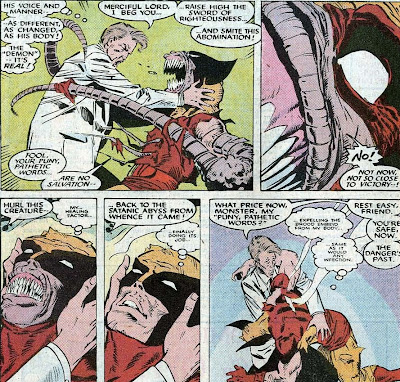 At the last possible moment, Wolverine's healing powers come through and destroy the embryo. But it's not like Logan can rest easy. Contrary to what the reverend promises... the danger's far from past. Harry and the Brood arrive, almost strangling Conover before the X-men manage to kill most of them.

Yes... Kill. For once, the team has adopted a zero tolerance policy. Not a single Brood may survive, or Earth is doomed. That's why sweet, innocent souls like Colossus and Havok slay Brood left and right, until only Harry remains. And he's got a hostage: Hannah Conover.

Luckily, Wolverine's just about done with all of Harry's nonsense... He crawls underneath the podium the Brood is standing on and pulls a surprise move, before pulling a not too surprising move... 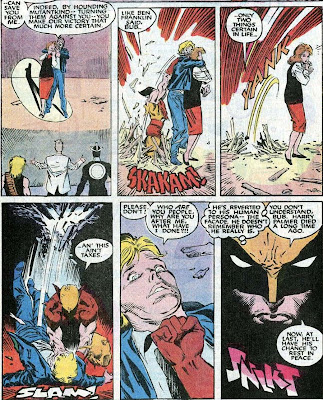 "You don't understand, bub... Harry Palmer died a long time ago.
Now, at last, he'll have a chance to rest in peace...."

With Harry Palmer's death, the last of the Earth born Brood have been dealt with. For once, the X-men can enjoy a nice, clean victory that in no way will come back to haunt them somewhere down the road. Heck, even reverend Conover and his wife have extra reason to celebrate...

A woman finding herself spontaneously cured of debilitating, chronic arthritis? Surely, this miracle must be an act of divine intervention... Or, well...erm, wait, remember how Brood embryos are able to boost their host's immune system so they're in perfect health by the time they take over?

And wasn't nurse Josey riding around with Brood host Harry for lord knows how many weeks? 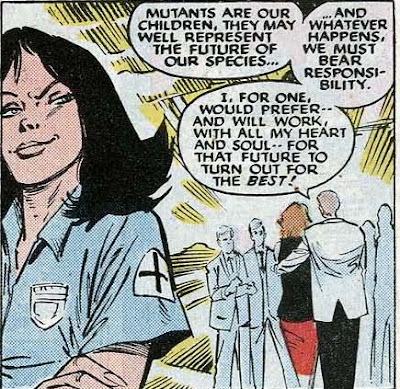 Posted by Clarmindcontrol at 10:03 AM

This has to be the the strangest blog I have ever seen!
A whole blog dedicated to mind control by Chris Claremont?
I read thru some of your posts, and although you have a point (and clearly there is a theme that runs through Chris's work) these comics are just for kids. Secondly, Id rather take Chris's run on x-men any day of the week over anything that been done to the x-men since. Lastly,the most disturbing mind control, in my mind, was The Uncanny X-Men #251 with Psylocke. It was just so crazy, and seemed to final at the time.

Thanks for posting, Anonymous. I'm sorry I don't quite agree with you that 'these comics are just for kids'. They may have read them, sure, but the target audience for this material has to be at least people in their mid-teens.

I'm sure Chris Claremont would argue that he wasn't writing sagas about life, death, self discovery, sacrifice and personal growth for a strictly preteen audience. He made sure they were entertained by adding plenty of 'splosions, but te actual subjects were still years beyond them.

And, agreed on Psylocke mind controlling everyone to just kill themselves was most disturbing.

Actually I find it a valuable resource, plumbing through some of pop culture's real strangeness.

It's valid to ask the question not only of how Chris Claremont, or any writer or artist, influenced society but also of what such a one's intent, and motivations, may have been.

To influence on a deep level fundamental aspects of a culture-scape is incredible power. Claremont's vision of the X-men, and the themes typifying his presence with the series, really have influence Anonymous.

Respectfully, I really don't think they are for kids. The X-men above all of Marvel's other titles has always had not only adult themes, but actively appealed to teens, young adults, and even adults in their maturity. This has been the case since the 70's anyway, which happens to be Claremont's territory in my opinion.