Lets revisit the last part of our previous post.

Back in Uncanny X-men # 221, Storm was off to find her former fling Forge when she came across the mystical murderers known as the Eye Killers.

With a little help from Forge's old mentor Nazé, Storm defeated them and continued on her journey. Completely unaware that Nazé wasn't exactly who he claimed to be. Back in issue # 188, he fell victim to The Adversary, his oldest foe... who used mind control to take over his shape. 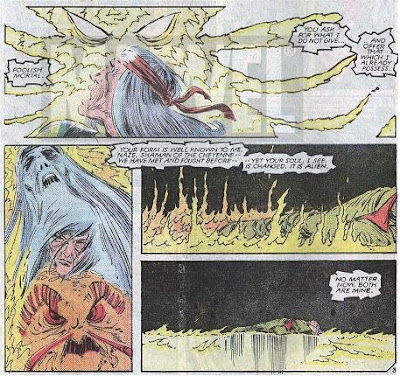 Nazé was taken over by The Adversary, a chaos bringer from another realm whose sole purpose is to destroy order and cause as much mayhem as needed to achieve that goal. The only person capable of stopping his reign of terror is Forge, who isn't merely a mutant inventor but also a Cherokee shaman with great mystical potential...

Unfortunately, Storm doesn't know any of this. 'Nazé' actually claims Forge is the one who is about to cause reality to collapse.  Forge rejected his Cherokee heritage and destiny as a shaman to pursue his own dreams. Claremont cleverly uses this established fact to have 'Nazé' convince Storm that Forge had actually gone mad.

Storm agreed to help find and stop Forge and away we go. But, not before we are treated to this disturbing scene...

Forget the Eye Killers that show up a page or 5 later, the real toe curling drama is seeing Storm  fight off the sexual avances of a man almost certainly twice her age. Ow, wait... she doesn't. In fact, she seems rather into it. If only she knew who he really was.

But, The Adversary really does play the part of elderly native American shaman to the hilt, even feigning injury after the Eye Killers' attack. 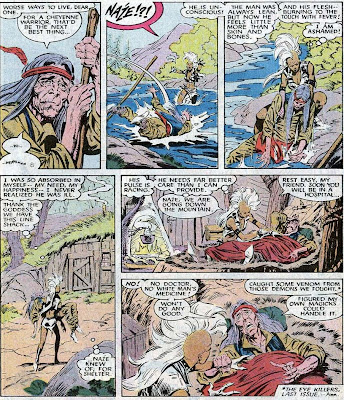 "Caught some venom from those demons we fought. Figured my own magicks could handle it."

Ow golly my, whát a pickle indeed... 'Nazé' has Storm forage the woods, finding the necessary ingredients for a mystical healing potion. She cooks them up into a broth, while delivering one of the most unbelievable monologues ever in comics or anywhere else for that matter. 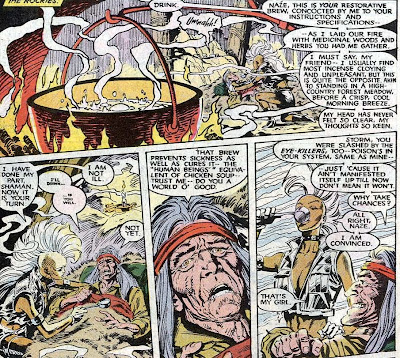 "Nazé, this is your restorative brew, concocted by me to your instructions and specification... as I laid our fire with medicinal woods and herbs you had me gather. I must say, my friend... I usually find most incense cloying and unpleasant, but this is quite the opposite. Akin to standing in a high country forest meadow, before a crisp, cool morning breeze. My head has never felt so clear, my thoughts so keen..."

... I'm sorry to interrupt you there, Storm... but while you were ranting about the fact your herbal medicine smells like one of those pine tree shaped air fresheners for your car... that feeble, infirm Nazé just died.

No, just kidding... no one dies when the living embodiment of universal entrophy is using their body as a time share. 'Nazé' recovers, but he has Storm take a sip of the brew as well, just to be sure. And then this happens... 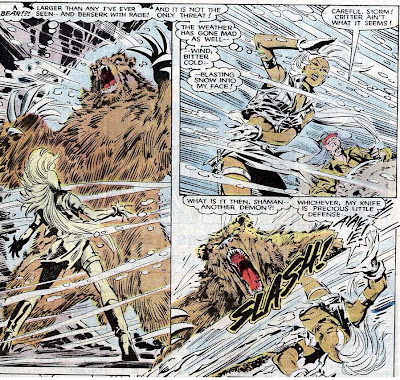 In a nice nod to an earlier New Mutants arc, what appears to be a demon bear shows up to kill Storm. But before she can properly react, the bear has shifted shapes... forcing her to face...

Keep in mind that the theme here is subtle male domination of a strong female like Storm. By first pairing her against a bear, a symbol of hulking, manly power... Claremont follows this by having Ororo combat a large snake. 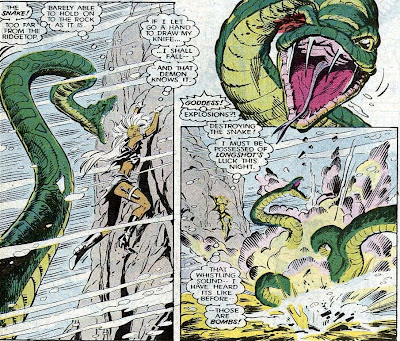 It might be considered poor symbolism if the snake itself was simply considered an analogue for the male sexual organ... But Claremont himself adds another log to the fire when he makes sure to point out the snake is keeping Storm from reaching the top of the spire where Forge (and her salvation) can be found.

Eventually, she triumphs against the snake, eagerly engages hordes of demons in her struggle to reach the top of the spire. But when she finally does come face to face with the man she used to love...
Forge seems a little... off. 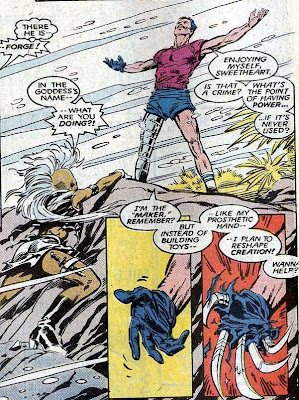 Call me crazy, but when the hand of the man you love, yet have been instructed to stab on sight, changes into metal claws... I would shoot and maim everything in sight. Yet, this is what Ororo does. 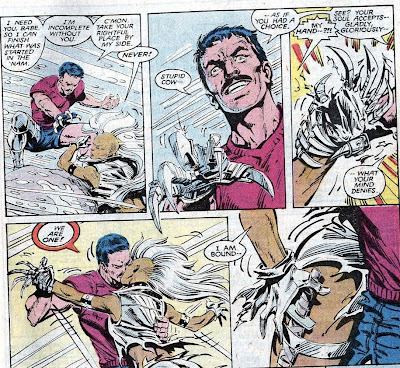 "I am bound..."
Powerful symbolism indeed, as she manages to overcome her instincts and actually succeeds in stabbing her lover.

However, it doesn't exactly have the imagined effect... 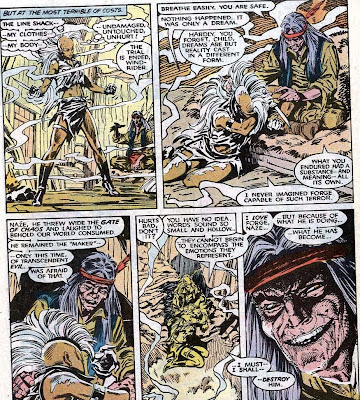 'Nazé' tricked Storm into this vivid, nightmaresque fever dream after forcing here to drink the 'restorative' potion he had her prepare. The Adversary had succeeded in properly conditioning Forge's lover to be the ultimate weapon of his destruction.

But hey, no one said you can't have a little fun before you throw all of existence into chaos. So, next issue opens with Nazé making good on his earlier promise to Storm about chasing her. It results in this charming exchange: 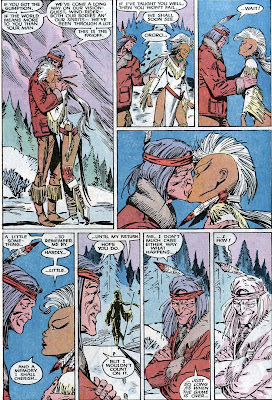 Posted by Clarmindcontrol at 7:34 AM

In Uncanny X-Men #137, the Shi'ar refer to Jean's Dark Phoenix persona as the Chaos-Bringer, an epithet Claremont once again uses here for The Adversary. So might this suggest a connection between the two?