The Byrne & Claremont reunion is only a mind control away*

What if... Chris Claremont and John Byrne had never broken up?

Surely, its a question many fans of their seminal Uncanny X-men run must have asked themselves. What did the world miss out on because John Byrne left over creative differences after issue #144?

We'll never know for sure, but judging from Claremont and Byrne's 2004 collaboration on Justice League of America, its pretty safe to say the world dodged a bullet when these two legendary creators parted ways back in 1981.

What did Chris & John have in store for their big reunion shot? Why, stick to what you know, of course... So, lets get this mind control party started. The Silver Age is back, baby... and it wants to claim your soul... Forever! 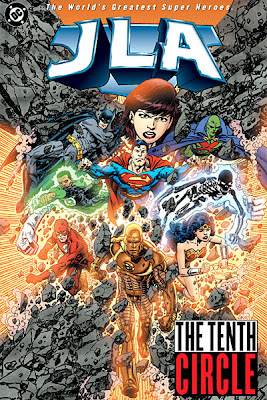 Justice League: The Tenth Circle focussed on, well, The Tenth Circle. Who? Thousands of years ago, the Amazons fought and banished this band of equally ancient vampires to another dimension. In recent years, one of them had managed to weasel his way back here. That would be the villain to beat: Crucifer (a play on Lucifer and Crucifix, but don't tell anyone!)

So far, so 1970s... In six issues, the Justice League went up against Crucifer, his band of flunkies, met up with the all new Doom Patrol and... Ow, I just don't have the energy for this. Can anyone help out with the obligatory info dump?

Ah... Thanks J'onn. Crucifer's big plan was to get his fellow Tenth Circle vampires back to Earth. But, he needed bodies for them. No problem, you just go out and mind control some people off the street... 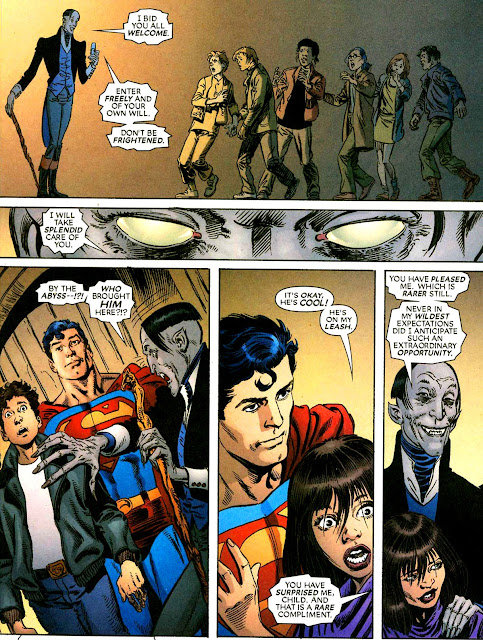 What's Superman doing there? Heh, well, the little girl is called Nudge, she controls minds by gently 'nudging' them to go along with her wishes. Even Kryptonian ones as it turns out. 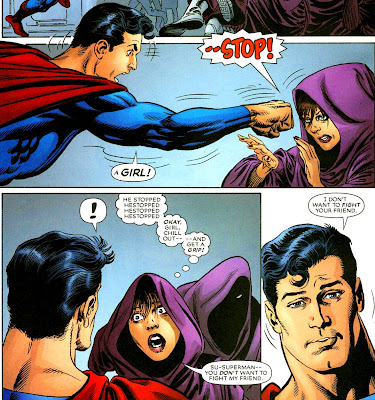 You're a scared, young girl who is unwillingly working for a bad guy and you have just managed to ensnare the world's strongest hero. What do you do?

Do you force him to take you away from there, or maybe send him to get the other JLA members? You might even consider releasing him altogether so he can take the lead and help out. World's strongest hero, after all.

But no, she just takes him along as one of Crucifer's captives. Because if anyone can beat an immortal vampire, its the man of steel. 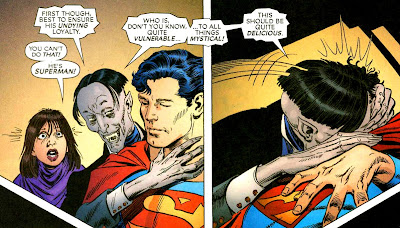 With Superman already under one form of mind control, Claremont and Byrne have an uber-vampire snack on him as well. Crucifer didn't actually turn him, because Kryptonian blood isn't exactly appetising (and he probably doesn't need the super powered competition).

After snacking on one of his enthralled followers, Crucifer was ready for the next step of his plan. 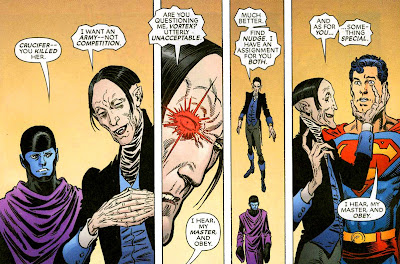 With a little 'help' from Superman, Crucifer took on Faith, the JLA's resident psychic and potential threat to his plans. Bless her heart, she even made a Buffy the vampire slayer reference before Crucifer took her out. 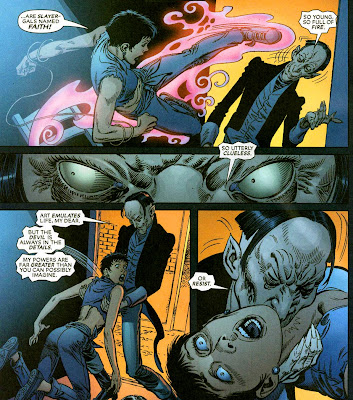 Crucifer wasn't all about business, though... He also enjoyed revenge, specifically against the Amazons who had driven out his kind. This means the JLA's resident Amazon was about to get humbled by a mind controlled Superman.

Yes Diana, I also felt there was something strange going on. Like how a comic from 2004 read like it was written in the early 70s... Back when this sort of storytelling was already tired and out of date.
But enough meta commentary, on to the obligatory hero versus hero part of the exercise. 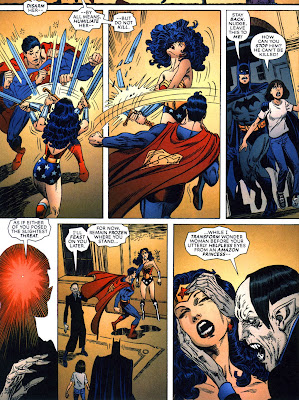 Crucifer mortally wounds Wonder Woman, forcing Batman to leave the scene so he can save Diana. Crucifer is free to continue unopposed... Time for the end game, lets bring back the tenth circle... 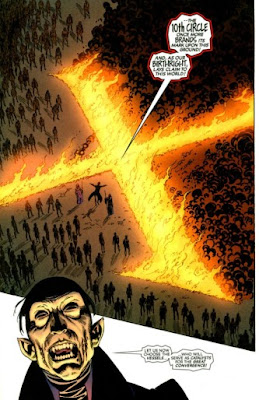 Your big reunion with Byrne climaxes in a giant burning X that draws in hordes of mindless slaves that defend it with their very lives. This X might be nothing more than the Roman numeral 10, or it could be a little tiny dig at the X-men franchise and their hordes of slavishly devoted fans.

Yeah. Probably not. Lets stick with what we know for the finale. You guessed it: more mind control! 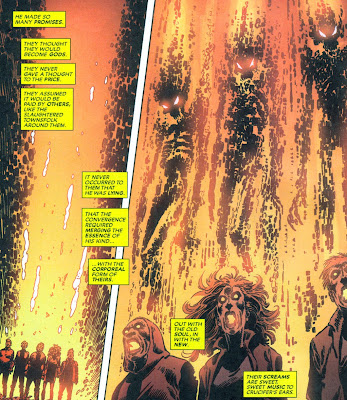 Yup, the only reason Crucifer kept his cronies around was for them to get mind controlled by his returning fellow Tenth Circle vampires.

Try that with your story telling techniques sometimes.

*... With sincerest apologies to Paul Simon
Posted by Clarmindcontrol at 6:34 PM