Hell hath no fury like a Sage mind controlled... 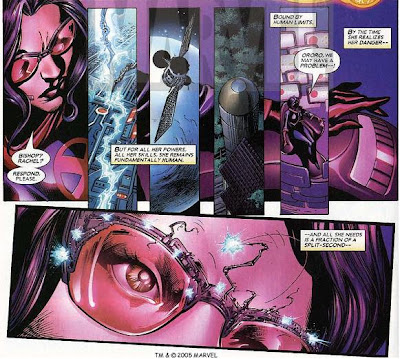 So, we covered Chris Claremont's third Uncanny X-men run a post or two back... But its worth revisiting as even Claremont's first storyline features a prime example of rehashing the old classics. Claremont and artist Alan Davis pitted the team against an old Captain Britain enemy known as The Fury... A supposedly undefeatable killer robot from an alternate dimension. No matter what you throw against it, the Fury will adapt and recover. And apparently, it can also invade minds... The X-men's resident mentat Sage was taken over by the Fury, via the team's cybernetic sunglasses (as seen in Uncanny X-men 446).

As a Fury controlled puppet, Sage disabled the Xavier institute's defences and residents before being able to somewhat rid herself of the creature's influence. She remained susceptible to The Fury, as was shown many years later during the X-men: Die By The Sword miniseries in which the Fury reappeared to cause trouble all over again... Still, aren't Sage's sunglasses cool?!
Posted by Clarmindcontrol at 8:46 PM