And one more mind control for the road 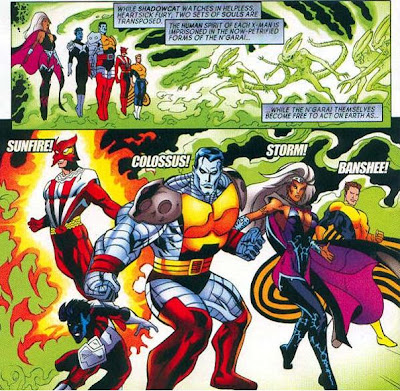 Seeing as this is the final X-men related mindcontrol posting I have to offer, I figured a scene from the 2000 limited series X-men: Black Sun was appropriate. This was written during Chris Claremont's return to the X-books and he was supposed to be on fire... Unfortunately, editorial quickly killed his tenure on the book after a little over a year and a half... During that time, he produced this limited series in which the N'Garai resurfaced to threaten mankind once again. I picked this panel because it shows pretty much all the new X-men that got recruited to fight Krakoa back in 1975... You have your Banshee, you have your Sunfire and of course the usual longtime members like Storm, Colossus and Nightcrawler... But an added bonus: it features the N'Garai, a breed of demons Claremont introduced in his second issue as X-men writer... Back then, the N'Garai called Kierok just attacked the team, no mention of mind control whatsoever... but in this book, the N'Garai took over the X-men's minds and used them to... I guess you can piece together what happens, right? This was issue 2, by issue 6, it was all taken care of... Not unlike the Uncanny X-men clips!
Posted by Clarmindcontrol at 10:02 PM