One of the most pivotal tales of the X-men is 1982's graphic novel  God Loves, Man Kills... Chris Claremont brilliantly mixes mutant hate with religion when he introduced the reverend William Stryker, a popular televangelist who uses the word of God to launch a crusade against all mutants.

Stryker employs a band of vigilantes called Purifiers who kill every mutant they can find in the name of the lord. Leaving their corpses for anyone to see, in this case by tying the young children to the swing on the playground. Such horrifying, cruel acts cannot go unpunished. Enter... Magneto. 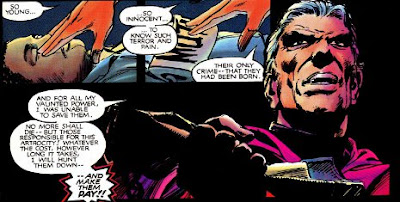 The mutant master of magnetism was drawn to the Purifiers' anti mutant crusade. He swore to avenge all the senseless deaths they had caused. But Stryker wasn't attacking mutants at random, far from it. The reverend had a plan in mind to kill all mutants and it involved Charles Xavier.

Through unrevealed means, Stryker had learned about the X-men and specifically their telepathic leader. After arranging to appear with Xavier on ABC's Nightline to discuss mutants, the Purifiers led Xavier, Storm and Cylops into an ambush on their way back home. Making it appear like a car accident, they left three charred bodies in the burnt out wreck... which didn't fool Wolverine's senses.
But the X-men were still unaware of Stryker's involvement, let alone his plans with the professor. The reverend wanted to use Xavier and his Cerebro machine to identify and destroy any and all mutants that came to his sermons. This way, he could filter out the true and pure believers from his flock.

Naturally the professor would never agree to any of this, so Stryker ordered his will broken. In a truly inspired, utterly horrific unending virtual reality loop, Stryker assaulted Charles by having demonised versions of the X-men brutally attack and mutilate him.


There is so much going on in these panels. From the obvious comparisons to Christ on the cross to the utter depravity of the demonic X-men. Not to mention Brent Eric Anderson's striking art work and the moody coloring job that only uses blood red and pitch black to intensify the horrors on display. Unfortunately for Stryker, all of that still didn't get Xavier to crack.

One has to admire just how methodical they were about it, keeping progress reports and everything. Naturally, they had no chance of breaking the professor. He's a man of great moral fibre, the idea he would ever succumb or use his powers to hurt his pupils? Madness... 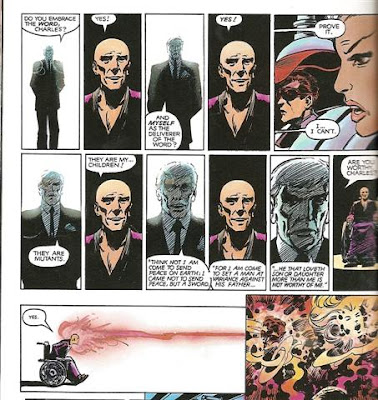 During his inquiries into the Purifiers, Magneto encountered the X-men who were looking for their missing team members. Deeming Stryker too big a threat to ignore, Magneto allied himself with his most hated enemies.

In an impressive display of force, Magneto kicked off the final confrontation with Stryker by disrupting his sermon. How did he achieve this? Ow, by simply yanking the dome off the venue... the friggin' Madison Square Garden.

Backstage at the Garden, Stryker had Xavier ready to scan the audience for possible mutants. If he found any, he was forced to... deal.... with them.

Xavier was used as a machine to fire intense psychic energies at any suspected mutants. If you even had a little bit of mutant potential, you'd start bleeding from the ears. Lots of people did in the Garden, including Anne, field leader of the Purifiers and loyal Stryker subject.

When Stryker, fired up by religious fervor, realised Anne was a mutant he tossed her off the canticle. Falling at least two dozen feet, Anne died right before the rolling cameras. To add insult to injury, they also shot Stryker's final conclusion with the team that had him pointing a gun at 13 year old Kitty Pryde... right up until the point a security guard came to his senses and ended the menace of Stryker by planting a bullet straight in the reverend's heart.

Xavier was freed, no one was too seriously hurt and the X-men and Magneto soon returned to Xavier's school. Magneto politely declined the X-men's offer to stay with them and left soon afterwards, just as Charles was getting a little misty eyed...

Apart from the emotional, if not slightly overwrought ending, this graphic novel is a showcase of how to tell a compelling storyline that, despite dealing with familiar subjects, still manages to feels refreshingly original.

Posted by Clarmindcontrol at 10:32 PM