And then there was the time the Fantastic Four got mindjacked right out of their bodies! In an astonishingly creative change of pace, Chris Claremont recycled the ol' mind control trick in a stale storyline that ran through Fantastic Four # 10-12. The story? Reed Richards got kidnapped by the Genoshan government (another one of Claremont's creations by the way) and the team races off to the former green and pleasant land. Their Pogo Plane gets shot down and when they awake, they see... themselves? 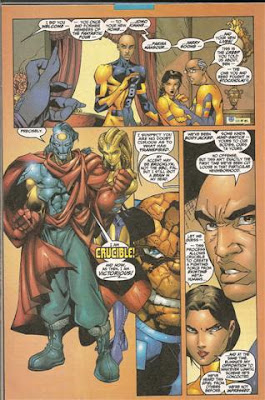 Yes, while they were out the Genoshans used advanced technology to switch the mind of three mutates with those of the Fantastic Four. Why exactly the Genoshans did this or why they were after Reed isn't really important. All it does is give Claremont an excuse to show a Fantastic Four unfamiliar with their own powers, "Thing" doesn't know his own strength, while "Invisible Woman" effectively blinds herself when she turns invisible... Soon, the real Johnny, Sue and Ben get their own bodies back, free Reed and go on to face the real villains: Crucible and Ayesha.

Who are they, you ask? You really wanna know? Well... Ayesha is actually Her, the perfect female, created by the mad scientists of the Enclave. And Crucible, ah, tis will take some 'splainin'... You see, before Claremont took over with the fourth issue, writer Scott Lobdell was in charge of Fantastic Four. Lobdell introduced Crucible in the first issue of the relaunch, planning to build the character into a major big bad. He was supposed to be a mad, evil genius with ties to the FF's nemesis Doctor Doom. So far, so good... but Lobdell left after the third issue and Claremont had to deal with Crucible. So... Crucible fought Reed Richards in # 5. Mr. Fantastic was able to beat him, but Crucible did manage to steal Reed's creative genius. At first no one noticed this, but after a while it became apparent Reed was no longer able to come up with any new, innovative approaches. In subsequent issues, we got treated to little teases regarding Crucible's identity and his big, brilliant schemes... And now, in issue # 12 we finally find out who's behind the mask... You ready? Its none other than ageing-almost-a-joke Maris Morlak, of the Enclave! 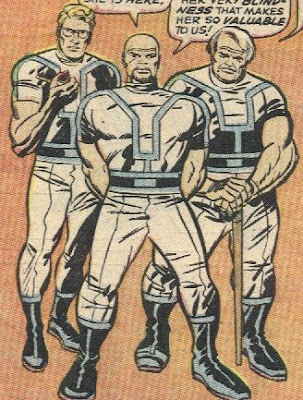 Crucible/Morlak (the graying one with the cane on the far right) reveals he had leeched away Reed's creativity to add to his own considerable intelligence... Now, lets review this motive for a second... First he drains Reed's mind... then, he decides to order the Genoshan Pressgang to kidnap him, thus incurring the wrath of the entire Fantastic Four AND undoing their entire scheme! Why was in necessary to bring Reed to Genosha when the Enclave had already reached their goals by the end of issue # 5? My mind boggles... and its not even being controlled...

Ow yeah: check out the first picture to see another one of Claremont's writing tics on display: characters proclaiming who they are "I am CRUCIBLE!". I dunno, Chris... Somehow having your characters wear nametags seems a lot easier and a whole lot less silly.
Posted by Clarmindcontrol at 5:02 PM

Hi, I have been filling up some holes in my FF collection and just read these issues.

It was the Genoshan government that kidnapped Reed Richards, not the Crucible.

And the Crucible we had seen up until the last issue of the arc was Morlak, the younger, bearded man. Only after the revelation of his identity was he absolved by Shinksi, the older member of the Enclave.

Still, I was also very disappointed with the revealing of his identity and the ensuing "fight", especially since Crucible made such a strong impression in Issue #5 and the geniusless Reed was a very interesting idea.