Nightcrawling Towards Some Mind Control

The Classic X-men title was dreamt up by Marvel in the mid 80s to capitalize on the continued success of Claremont's Uncanny X-men. Many fans came to the party late and missed the early issues that set the scene. More than reason enough to launch Classic X-men, a title that started reprinted the 'early' adventures of the X-men, starting with issue #94... 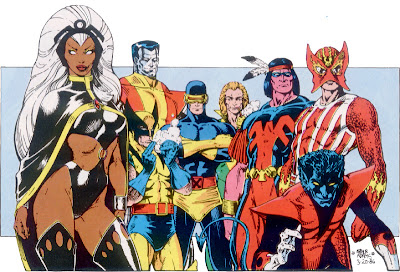 Joined by popular artists like Art Adams and John Bolton, Claremont added several new features to what would otherwise be a rather dull reprint book. Claremont wrote one or two page scenes that were inserted into the original stories to embellish his long running narrative.

As an added bonus, he also wrote backup features that served as vignettes to individual characters. Often centering on their personal development during whatever arc the main book was engaged in at the time.

Naturally, some mind control had to be involved... In this case, it's Nightcrawler in between issues # 117 and # 118. Leaving the Savage Land on a rather primitive raft, after their fight with Zaladane, Garok the petrified man and the mind controlling Sauron, the team found itself caught in a freak weather event that would have killed them if not for the timely arrival of a freighter. 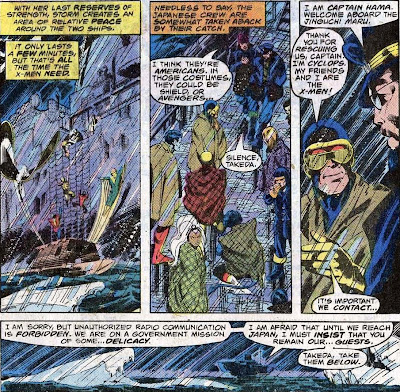 Convenient to the story, the captain of the Jinguchi Maru informed the X-men they were operating under radio silence because of some secretive mission the vessel was on... for another month and a half. This meant the X-men couldn't even tell professor Xavier they were still alive.

So, what did the team do to pass the time on board? Leave it to Cyclops to come up with a schedule of fun filled activities: he had them train... a lot. But, as Claremont revealed in the back up feature to Classic X-men # 23, Kurt also had quite the adventure en route to Japan.

After one of Cyclops' rigorous exercise routines, Nightcrawler was resting in his cabin when he spotted a woman going overboard. Teleporting after her, he failed to grab her and was soon overcome by the sheer force of the waves, washing ashore on a nearby island.

There, the half naked blue furred mutant discovered the remains of a  crashed 1930s plane straight from season one of Lost. Searching the debris, he found some appropriate attire and dressed for the part to live out his own Errol Flynn style caper: Kurt was ready to save that damsel in distress.

Alas, he soon realised he might be in way over his head... 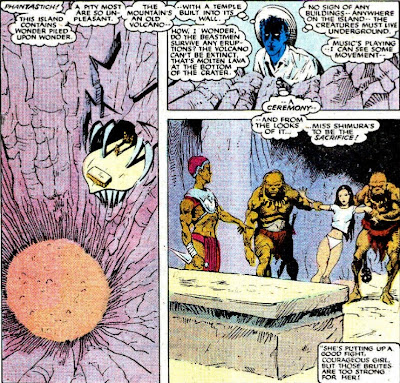 For story purposes, Nightcrawler automatically assumed the missing woman was on the same island... And wouldn'tcha know it, he was right. Captured by the locals, the woman Kurt finally recognised as Eiko Shimura, was about to die in a ritual.

Nightcrawler deduced the tall figure must be the high priest. Whoever he is, the man sure proved able to control minds. After all, not only does Eiko appear totally subservient, she also willingly lies down on the altar to be sacrificed...In her undies no less. The man has power. 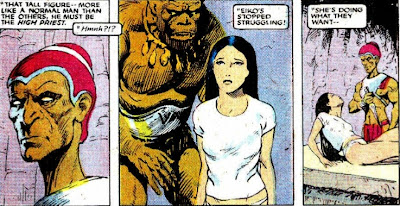 Luckily, so does Kurt. 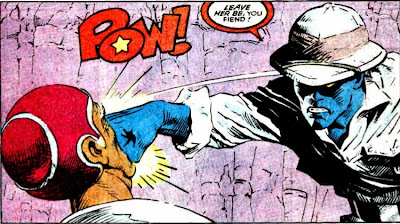 However, a punch to the nose isn't enough to deal with this particular baddie, as Kurt learns the hard way when he turned away from his enemy to free Eiko. 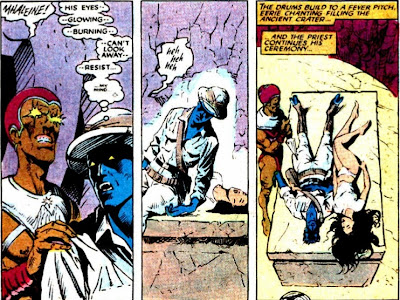 Nightcrawler got himself mind controlled and willed into unconsciousness, ready to be the second human sacrifice of this ancient tribe. Luckily, Kurt regained control in time to fire off a flare gun he had found in the crashed plane. The flare was spotted on the nearby Maru and the X-men stormed to their rescue before any serious harm befell them...

This lucky turn of events ensured Kurt was ready for action by the time Uncanny X-men # 118 rolled around... Which proved to be a distinctively different tale (for one, there was *no* mind control menace). 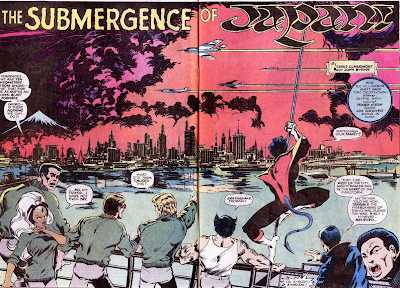 Posted by Clarmindcontrol at 2:04 AM