Mind Control Is Anything But X-Tinct part II: You're Once, Twice, Three Times A Mind Controlled Lady...

The X-Tinction Agenda continued in X-Factor # 60, which picked up seconds after Genosha's female president Renau had delived the announcement that the captured mutant terrorists (Storm and the New Mutants) were going to be executed.

Pleased with her performance, she returned to talk with Cameron Hodge...But before we go into just why an angry Genengineer burst into their meeting.. Let's talk about the art. 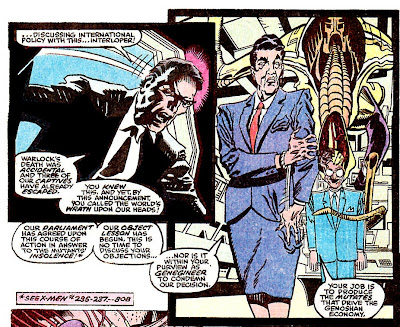 The X-Factor chapters of the crossover were drawn by Jon Bodganove. His style can best be described as an...acquired taste to say the least. A fair number of fans were less than pleased with it at the time. Especially Uncanny X-men fans, used to Jim Lee and only picking up X-Factor to follow the story, were rather vocal in their displeasure.  Some even wanted to raise money so they could hire Lee to redraw the entire crossover.

That's a little unfair, but full disclosure: the only reason I specifically noted Renau was a woman is because Bogdanove makes her look like Ronald Reagan in drag. And a couple of pages later, a poignant scene with Cannonball and Sunspot shedding a few tears becomes unintentionally hilarious looking. 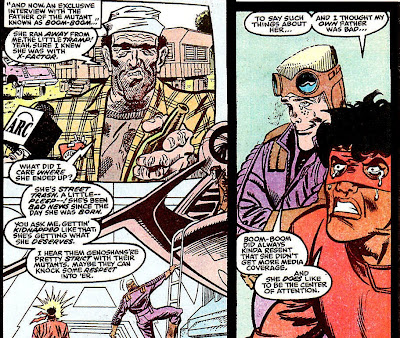 Back to the actual story...

Renau's announcement that Genosha was planning to execute American citizens was about to spark a major international incident. But considering X-Tinction Agenda was published during the presidency of George Herbert Bush rather than his son George Walker, there wasn't already an invasion under way.

Instead, they tried a more subtle approach first... 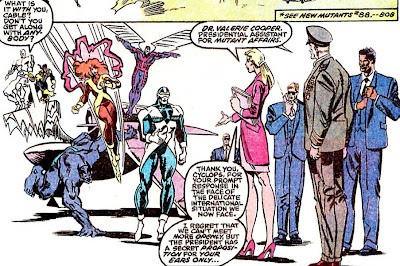 Hoping the government would interfere on their behalf, Cyclops and the others are more than a little disappointed to learn they won't be receiving any direct assistance. After all, America doesn't negotiate with rogue states and terrorists. Unofficially though, Valerie Cooper gave the mutants her blessing to handle the matter in whatever way they saw fit. She even gave them a little light reading... 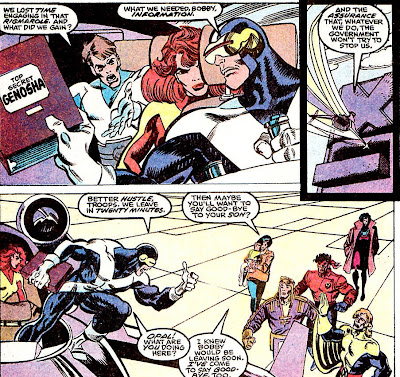 Another fine example of Bogdanove's... art... The information file on Genosha is depicted as a leather bound hardcover with 'TOP SECRET' stamped on it. Yeah, that's real subtle. Still, the game was afoot and the combined forces of X-men, X-Factor and the remaining New Mutants headed for Genosha in X-Factor's airships. Unfortunately, long before they were even close to the island Hodge had already picked up their vessels on his radar satellite radar and made sure a little welcoming party awaited them. 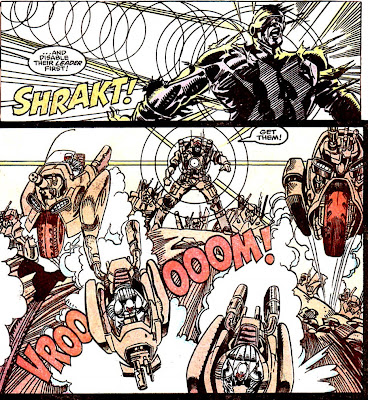 Yeah, that's the former X-man Havok, reincarnated as a Genoshan magistrate, completely unaware that he just shot his own brother in the back. Scott immediately recognised Alex, who remained totally oblivious to his real idenitity. As the others held the Magistrate forces at bay, Scott decided to literally hammer home his point by hitting Alex in the head. A lot. 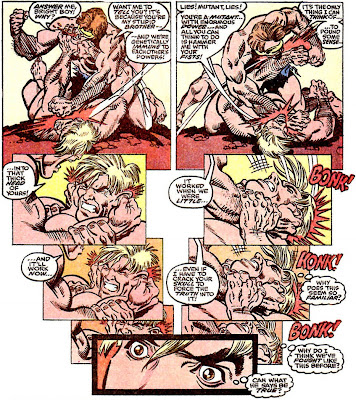 Just why they are supposed to be half naked, wrestling each other to the ground isn't quite clear. But just as Cyclops starts to break his brother's mental conditioning, Havok uses the teleporter Pipeline to get himself and his forces to safety, leaving the X-men to plan their next move... Just like Hodge had planned. 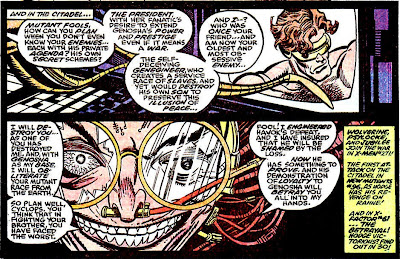 The story continued in the pages of Uncanny X-men # 271, that brought in three more wayward X-men. Wolverine, Psylocke and Jubilee had been travelling on their own through Asia for weeks, totally unaware the X-men were even back together.

Yet here they are in Genosha anyway, saving the fugitive Rictor and Boom-Boom from a Magistrate patrol. Just how Wolvie and company knew what was going on is never explained, we can only assume they saw it on the news somewhere.

Psylocke mind links with the New Mutants to bring everyone up to speed. She also senses the presence of the other X-men somewhere on the island... ánd that Wolfsbane and Storm are still inside the citadel. Ordering Jubilee to get the still depowered Rictor and Boom-Boom to safety (good luck with that) Wolverine and Psylocke decide the best way to gain access to the citadel is by disguising themselves as Magistrates and slipping in unnoticed.

Storm didn't really need that much saving, though. She was doing just fine, having slipped into the Genengineer's private offices in an attempt to take him hostage. 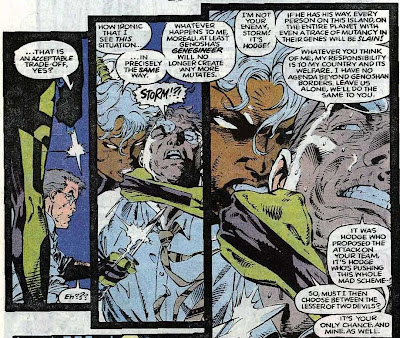 For a man so skilled in bringing out everyone's full genetic potential, doctor Moreau himself is anything but a prime example of physical fitness... If you can't break a pre-teen girl's choke hold, you're in bad shape. Luckily for him, Cameron Hodge happened to pass by in time to literally nail Storm. 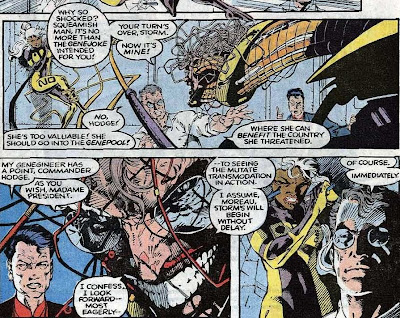 "I confess, I look forward most eagerly... to seeing the mutate transmodation in action. I assume, Moreau, Storm's will begin without delay."

Well, sure she was already wearing the skin tight mutate bodysuit, they might as well get on with it. And just as the transformation process was beginning, Wolverine and Psylocke got a convenient reminder to make a hurry. 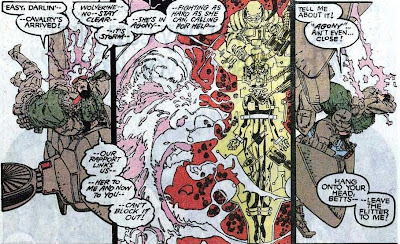 Fighting their way into the citadel, tackling Havok (him again!) and even Hodge (who else?) along the way, the deadly duo ultimately fails to stop the Genengineer from completing the transformation. 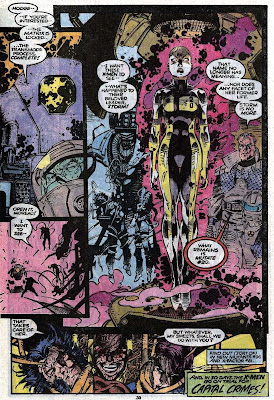 With Storm transformed into a mindless slave laborer and Wolverine and Psylocke soon to follow, things were really starting to heat up as we'll see in part III of Mind Control Is Anything But X-Tinct: Don't Rahne On My Mutate Parade
Posted by Clarmindcontrol at 11:45 PM