See Psylocke Control Minds While Getting Mind Controlled Herself

A picture really is worth a thousand words... That's why today's entry focuses on a single panel from the past, but this time using a lot more words and a bunch of extra pictures to fully explain the magnitude of the mind control involved... 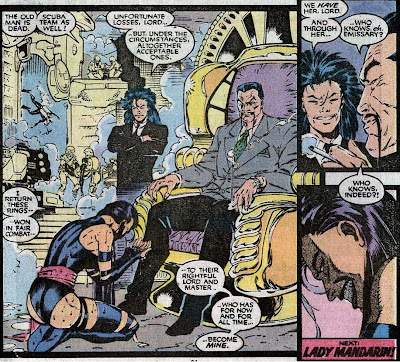 "I return these things... won in fair combat... to their rightful lord and master... who has for now and for all time... become mine."

Back in 2008, this image from Uncanny X-men # 256 was included as part of  a previous entry, but there's so much more mind control to cover from that issue. How did Psylocke go from a British, pink haired telepath and member of the X-men to an Asian assassin subservient to the Mandarin?

Well, remember how she mind controlled the X-men into entering the Siege Perilous, effectively having them commit suicide so the Reavers wouldn't ambush and kill them? Psylocke went through the mystical reincarnation gem as well, only to resurface in Uncanny X-men # 255. 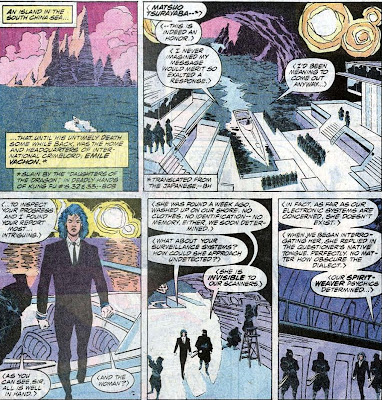 She washed ashore on a very familiar island, now controlled by the Hand. Naked and absolutely amnesic, no one knew who she was, until local crime kingpin Matsuo Tsurayaba arrived and got a good look at her...

"She is the mutant X-man Psylocke. And by all the gods who ever were...
I know full well what the Hand may do with her."

Tsurayaba's big plan unfolded in Uncanny X-men # 256 when he visited the Mandarin with an intriguing proposal: after some proper modification (read: mind control) Betsy would be ideally suited to be the Mandarin's mind reading premiere assassin. Taking care of his enemies ánd learning all their hidden secrets in the process. 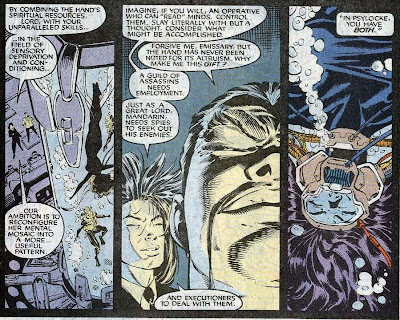 "Our ambition is to reconfigure her mental mosaic into a more... useful pattern"

Mind control by any other name, really.

Incidentally, probably the biggest reason the Mandarin appears in this storyline at all is the fact Uncanny X-men # 256 happened to be the first of three Acts of Vengeance crossover tie-ins.

The big idea behind this Summer event was simple, yet elegant: tired of getting beaten by their archenemies, the villains decided to swap and attack heroes who weren't used to fighting them... Daredevil got Ultron, the Punisher fought Dr. Doom and the X-men had the Mandarin show up.

So, how was Psylocke's mind control going?

Honestly, who knows? Claremont writes a rather hard to grasp, perhaps purposely disjointed string of scenes that depict Betsy in the various stages of her life.

You remember how she started out as Captain Britain's blonde twin sister? Here she is, little more than a child, sitting in a prop Spitfire airplane on a carnival ride, imagining about really flying and killing Germans... And then the fantasy becomes all too real. 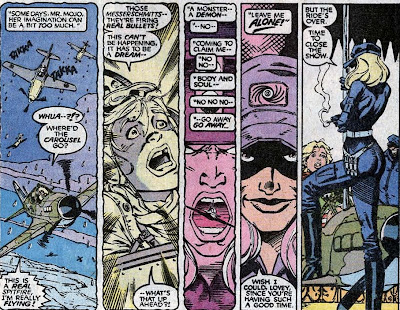 After leaving the carousel, she finds a pretty ring. And pretty soon afterwards, she finds another. These are the ten rings of the Mandarin she is somehow collecting. But she's a bit too busy getting pushed around in her own mind to notice the villain's presence... or the rings' powers. Until she gets a make over that is... 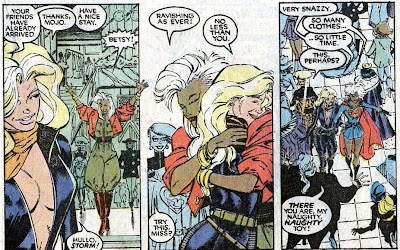 "THERE you are, my naughty, naughty toy!" 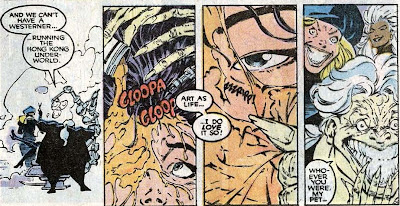 "We can't have a westerner running the Hong Kong underworld. Art as life... I do love it so!"

By now, it's obvious we've reached the part of Psylocke's life in which she was under Mojo's thrall. Back in New Mutants Annual # 2, the ruler of the Mojoverse already mind controlled her and even transformed poor Betsy in a copy of himself. 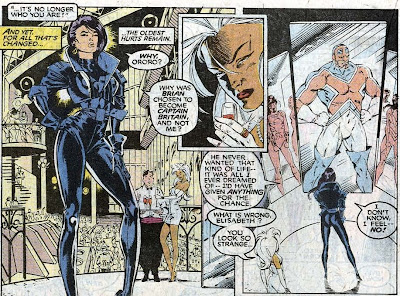 "And yet, for all that's changed... the oldest hurt remains"

And here we have the debut of the Asian style Psylocke.

There are just a few problems here: for one, all of this allegedly only plays in her mind. Changing Betsy's mental form should have no impact on her physical body. And yet it does. Also: what's with all the memories she has to work through? Didn't we establish earlier in the same issue she washed ashore a complete amnesiac?

Ah well, onward and upward... Betsy's about to resume her quest for the rings. And now, she knows they're powerful ánd that her former friends the X-men have them. With Storm conveniently enough standing next to her, she starts with Ororo who refuses... And this is when a mind controlled Psylocke uses mind control to get what she wants... 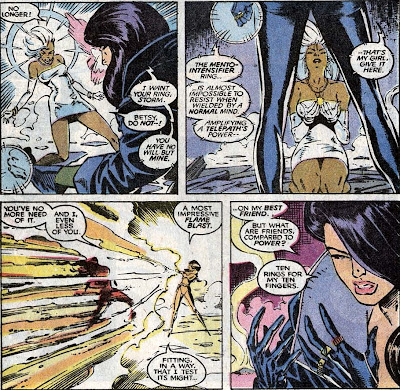 So, a proven, strong telepath also uses the Mandarin's mind controlling 'mento-intensifier' ring (not to mention a flame blast) to get her hands on Storm's bauble. Well, one might call that overkill, but hey... whatever works.

Psylocke then goes on to kill Colossus, Dazzler and Havok for their rings. And, in a nice, foreshadow heavy nod to a future storyline, she doesn't have to fight Rogue, because she's already fought Ms. Marvel to the death...

Her brother Captain Britain would have been next on Betsy's hitlist, but then the unexpected happened: 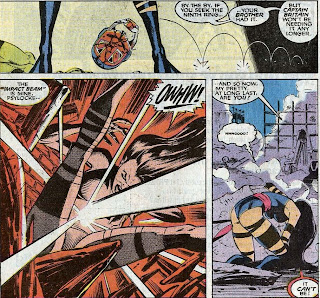 "The impact beam is mine, Psylocke... And so now my pretty, at long last, are you!"

The disembodied voice belonged to the Slaymaster, a Captain Britain villain from back in the day who fought Betsy when she took over for the titular hero and was blinded by him in the process. The appearance of Slaymaster wasn't part of the mind control strategy the Hand and Mandarin had set out.

The whole idea was to force Psylocke to actively kill off everyone she cared for in her old life, so she would be hurt, vulnerable and open to whatever the villains wanted her to do. The Slaymaster threatened to throw the proverbial monkey wrench in that scheme. Luckily, Betsy overcame her fear for the villain and struck back, discovering not everything is quite as it appeared... 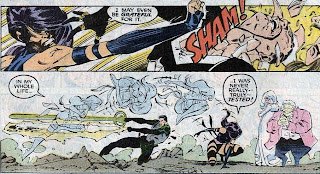 Smashing the Slaymaster's helmet, the face of the Mandarin was revealed. He immediately used whatever rings he still had left (count em in the upcoming panel, if the story makes any sense he could only have two out of ten). Not that he'd have time to count, because Psylocke was about to end him.

But even when caught at a distinct disadvantage, the mastervillain still tried to come out on top... 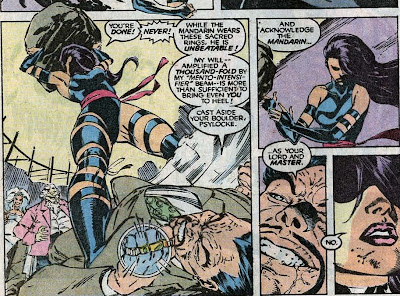 "Cast aside your boulder, Psylocke... And acknowledge the Mandarin as your lord and master."

Looks like he now has all his rings back. How come Psylocke doesn't have any left? Also why are Mojo and Spiral there, hovering in the background? And, more importantly, did Betsy just say 'no'?

"Your mind may control the ring... But mine... through my telepathy... controls your thoughts."

So, even while she herself is busy getting mind controlled, she controls others a record total of two times in the same issue. That girl sure is a pro. But surely, she wouldn't actually follow through on that threat now, would she? 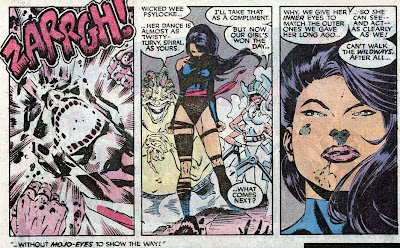 Well, guess she would.

So, judging from this story... after witnessing her coming to terms with being changed against her will, after seeing her face and deal with childhood trauma and insecurities, not to mention having her stare down her greatest fears while fighting the Slaymaster ánd beating the tale's actual villain in the process... You'd think ... It's only logical to assume Betsy would end the issue a free woman. 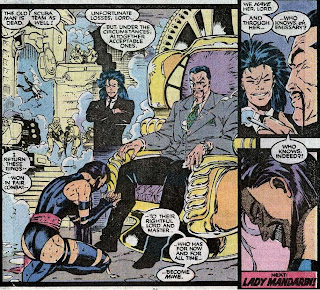 And so, with Psylocke killing everyone who tried to control or shape her, we come full circle, with this scene: Psylocke fully submitting to the Mandarin's rule after all. It makes very little sense indeed.

Y'know, not unlike an actual ring of the Mandarin.
Posted by Clarmindcontrol at 6:03 PM