He managed to write an issue in which every single one of his main characters get themselves mind controlled in one way or another. Even some of the unnamed bitplayers standing in the background get in on the action. Not bad for an Acts Of Vengeance tie in. 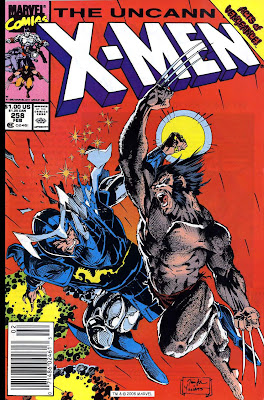 The fun actually started a month earlier. In # 257 Psylocke arrived in Madripoor on her first mission as the Mandarin's personal assassin. She was sent to take out Patch, who might become a problem once the Mandarin turned his attention to the island. Patch, of course, is an alternate identity used by Betsy's former teammate Wolverine.

He wasn't in the best of shape after getting kidnapped and crucified by the Reavers. Jubilee eventually freed him, but the damage was so severe his healing factor was no longer able to take care of even the slightest injury. Even worse: Logan's mind had started to break down too: he saw hallucinations of Carol Danvers and Nick Fury who he treated as real people, actually engaging them in conversation.

All Wolverine wanted to do in Madripoor is catch his breath and heal up. He didn't get his wish.

"Blast... somehow she nailed the kid."

Yup... That's Psylocke dressed as, well, she said it, you read it... Lady Mandarin. After mind controlling Jubilee, she found out where Patch was hiding and attacked. It wasn't really a fair fight, though... Psylocke clearly had the upper hand and that was even before she lost her head gear and Logan somehow recognised his teammate in her new Asian body, leaving him vulnerable to a knockout blow... 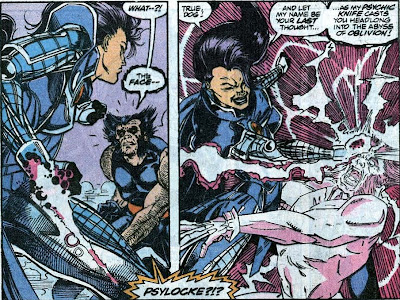 Well, guess his mental issues gave him some sort of unique insight. It wasn't enough to save him though. After stabbing him with her psychic knife, Psylocke learned that 'Patch' was actually Wolverine... and that he'd be far more valuable alive... That's why she brought Logan and Jubilee before the Mandarin and his partners in the Hand. They decided to give Logan the same mind wipe treatment used to make Psylocke one of their assassins... Yay, more mind control!

In Uncanny X-men # 258, the sensory deprivation sessions were already well under way... As shown in some rather visual and gruesome panels... 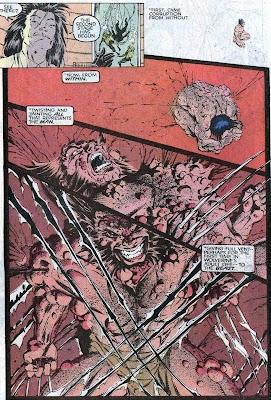 Psylocke had to monitor Wolverine's progress telepathically, because he was still "invisible" to electronic systems (courtesy of Roma, long story). That's why she was in his head, trying to sway him over, as the Hand's chief Matsuo Tsurayaba explained to a shocked Jubilee... 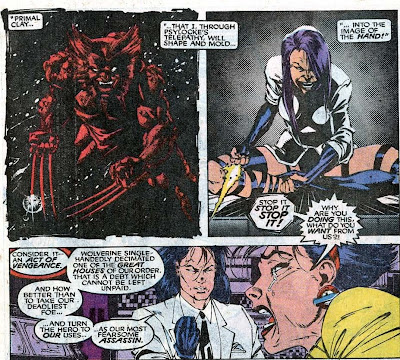 "Primal clay... that I, through Psylocke's telepathy, will shape and mold...
into the image of the Hand."

But having one of the world's most potent psi talents use all her mental swaying power in a relatively small space caused some unexpected side effects... As the Hand scientist tried to explain to Matsuo while he was busy intimidating Jubilee... 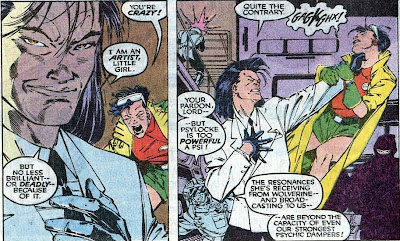 "The resonances she's receiving from Wolverine and broadcasting to us... are beyond the capacity of even our strongest psychic dampers!"

In other words... Psylocke's attempts to mind control Wolverine splashed over to those around her, but mixed in with Wolverine's feral, bestial rage. You can guess what happens next, right? 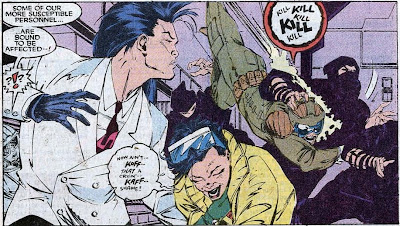 "Some of our more susceptible personnel are bound to be affected!"

And then some... While Matsuo was busy stopping the Hand goons from killing each other, Jubilee took advantage of the confusion to make a bold and daring escape. Alas, she didn't get too far before she literally bumped into, well, as always, he'll tell you himself... 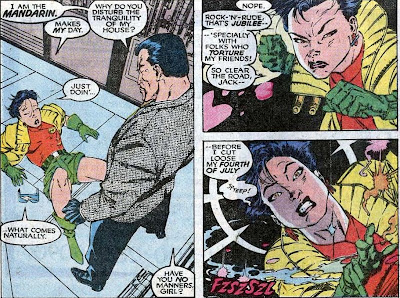 Have you no manners, girl?"

Ow, the Mandarin knows how to fix that! 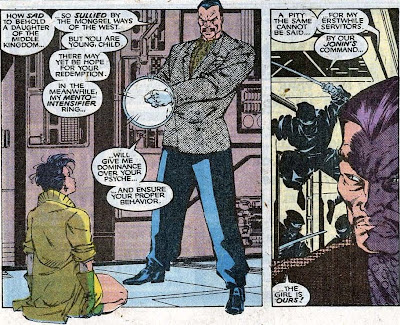 "My mento-intensifier ring will give me dominance over your psyche...
And ensure your proper behavior."

It's interesting to note that the Mandarin didn't simply mind control Jubilee to stop her, no... He was actually apalled that 'a daughter of the middle kingdom' as he put it, had been 'sullied by the mongrel ways of the west'.

He meant to turn her into a proper Chinese lady... An Asian professor Higgins to Jubilee Doolittle... "My Fair Mandarin: The Musical". 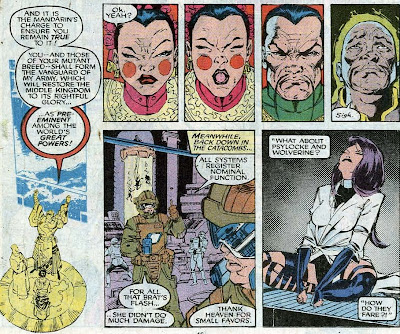 "What about Psylocke and Wolverine? How do they fare?!"

A more than fair question, which we'll answer in part II of Equal Opportunity Mind Control: Encore Ensemble Enslavement
Posted by Clarmindcontrol at 12:16 AM