Assuming the role of the Goblin Queen during Inferno changed Madelyne Pryor.

For one thing: she developed certain abilities... No doubt because she was a clone of Jean Grey, one of the world's premiere telepathic minds. Maddie's mutant powers however, focussed more on moral corruption... mind control, by any other name.

At the height of Inferno, she orchestrated a meeting between the X-men and X-Factor... An encounter rife with tension, because X-Factor didn't know the X-men were still alive (nor were they easily recognisable due to Inferno's demonic corruption).

And as far as the X-men were concerned, X-Factor was little more than a team of mutant bounty hunters. Hardly what professor Xavier had in mind when he assembled his first group of students.
It made for tense moments... and having Maddie there in the opening pages of X-Factor # 38 didn't exactly help matters. 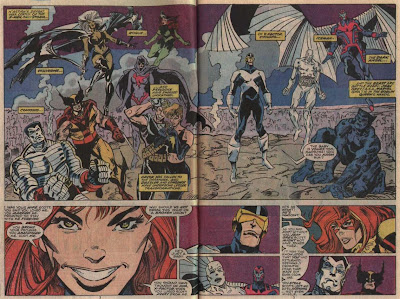 And ow yeah, she had already overpowered Jean Grey. Of course, this was signified by Jean wearing a slave collar made of energy. Anyhoo... She gleefully revealed the nature of her new powers... 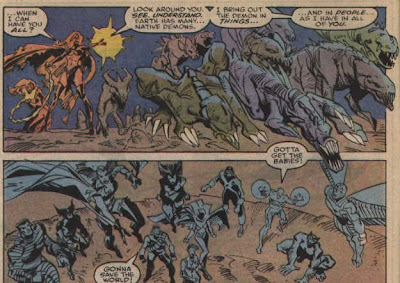 After all... What could keep the X-teams from attacking the Queen? Well, apart from a virtually unending horde of demons... mostly their own teammates, of course.

Y'see, remember how Madelyne had already started to corrupt the X-men well before she even turned into the Goblin Queen? Back in Uncanny X-men # 242, Alex finally and most willingly made the decision to serve as Maddie's lover... 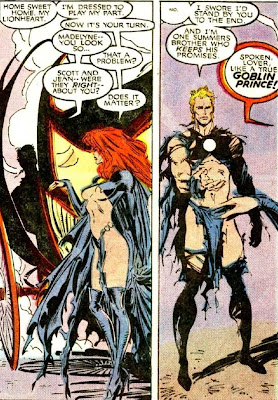 That explains why he was at her side, tattered costume and all, when the Queen confronted the X-people in Central Park... 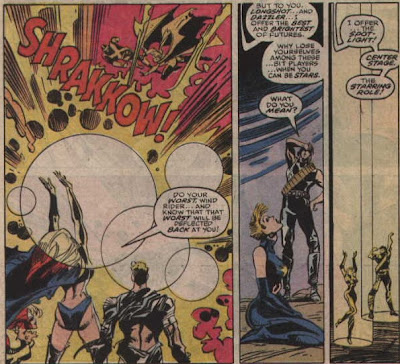 Bless Madelyne for knowing just how to seduce the already influenced X-men. After living with them for an extended period of time, she's fully aware of their deepest desires. Dazzler always wanted to be a world famous singer, before her mutant powers forced her out of the limelight. And Longshot, while not a mutant per se, was genetically engineered to be *the* star of Mojo's many movies.

It only makes sense their life with the X-men, living in the obscurity of the Australian outback and being believed dead by most of the world at the time, left them longing for... well, recognition. And they were more than willing to do anything for that spotlight. 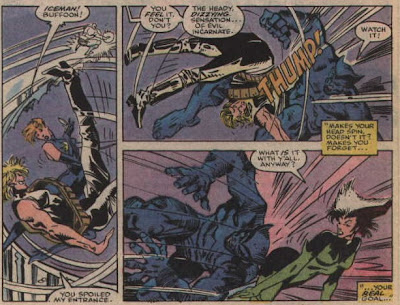 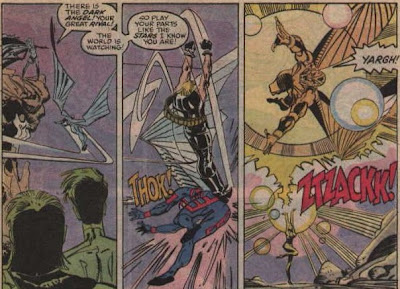 "The world is watching! So play your parts like the stars I know you are!"

Dazzler and Longshot brought down X-Factor charter member Warren Worthington, formerly the Angel. But after Apocalypse gave him a pair of techno organic wings and pressed him into service as one of his horsemen, the now blue skinned Warren reinvented himself as the much more volatile and deadly Archangel...

Just the right tool for a mind controlling woman intent on causing carnage... 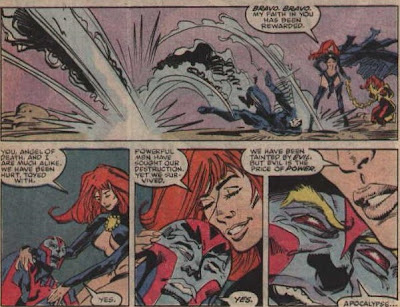 "We have been tainted by evil. But evil is the price of power."

The Goblin Queen managed to corrupt Archangel... somewhat. But his initial corruption by Apocalypse took precedence, in a way. His techno organic wings refused to obey Madelyne's commands long enough for him to inadvertently free the others, which led to a big fight between the two X-teams and Maddie.

Who won was never really in doubt... 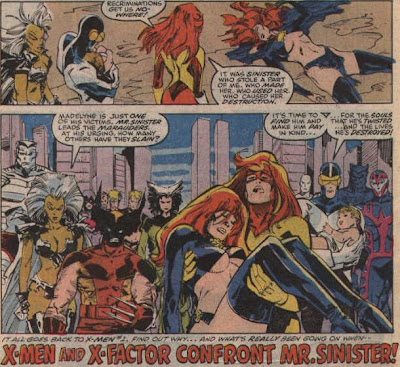 And indeed they did... As we covered *here*.

But there was even more mind control, courtesy of Mr. Sinister... As we'll cover in the next entry.