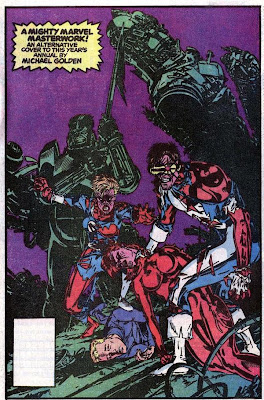 What better way to open a review about mind control in a semi alternate future than by showing an alternate cover to the tale?

This entry covers the Days Of Future Present story, an arc that ran through the 1990 annuals as the inevitable sequel to the ever so popular Days Of Future Past storyline. Back in Uncanny X-men # 141 and 142, Chris Claremont and John Byrne told a dystopian tale... set all the way in the far flung future of... erm, 2013... In which the Sentinels had taken over North America in their unending pursuit to destroy the mutant threat. 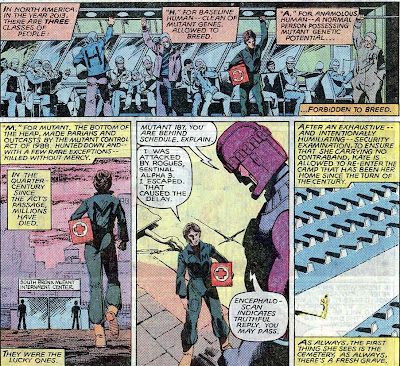 Most of the mutant population had either been killed or forced to live in concentration camps, outfitted with power dampening collars and  guarded by Sentinels who had pretty much taken control of North America. But even within the camps, the flames of resistance still burned. Kitty, or rather Kate, Pryde is seen smuggling in the final component of a jamming device designed to negate the collars so mutants can use their abilities freely.

So, who had been residing at this particular camp? Apart from Kitty, Storm, her husband Colossus and a disabled Magneto, some of the younger prisoners were Franklin Richards and Rachel Summers, daughter of Scott and Jean Summers.

Franklin and Rachel were passionate lovers, determined to use the jamming device to break free via the Morlock tunnels. But unfortunately, their dreams of freedom were cut short by the Sentinels. 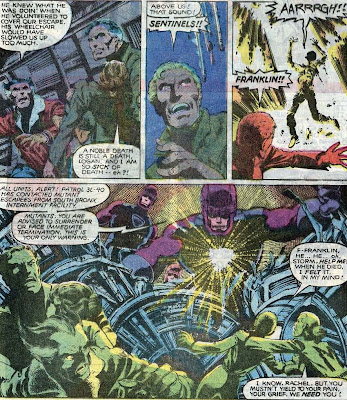 So, Franklin died in this alternate future and eventually Rachel would use her powers to travel through time and reality to join the X-men of reality 616. There, she slowly accepted her new situation and tried to make the best of it... Largely unaware that her fiance was already alive as little more than a toddler, the 1990 annuals addressed this rather odd situation when the adult Days of Future Past Franklin showed up alive and well in the past... Or rather, the then current present.

Using his formidable reality warping powers, Franklin goes about setting right what he thinks is wrong with the past he remembers. In the Days of Future Past timeline, the Fantastic Four only lived in the Baxter Building before the Sentinel uprising, so Franklin reverts Four Freedoms Plaza back to the old FF headquarters along with a similarly old fashioned FF-team. These shenanigans continue on for a while and include the FF, the New Mutants, X-Factor and the X-men before Chris Claremont got to tie all of this into a nice knot with Uncanny X-men Annual 14 and the character of Ahab.

Ahab is the enemy of the four annuals... a mysterious Houndmaster from the future who was responsible for breaking Rachel and overseeing her training into a mutant seeking Hound unit. 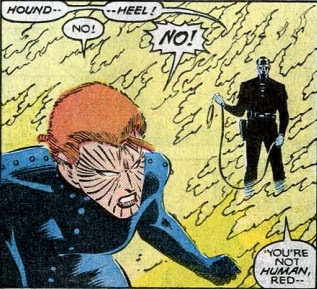 Travelling back to the past (sigh... then current present), Ahab tried to gain control of both the fugitive Rachel and Franklin. Instead, he found himself confronted with their respective parents.

But, like any good villain knows... When life hands you lemons, you capture them and you squeeze long enough til you get mind controlled lemonade. Or minions, whatever happens first. 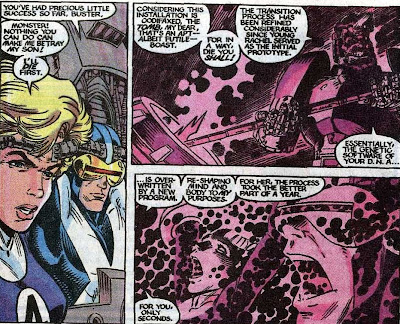 Ahh... It might be a form of futuristic mind and body control, this still feels like a classic with both their body and mind being twisted into a new, ever so evil shape... 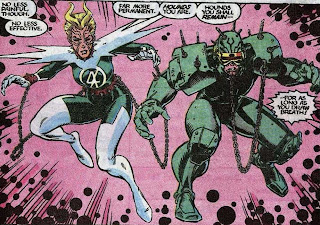 Sticks and stones might break no bones, but chains and spiky collars sure make enslaved meta humans hollah! 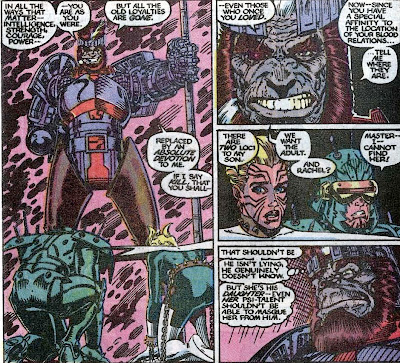 Ah, the whole kneeling shtick, along with the slave tattoos on the Invisible Woman... Ahab spares no expense. 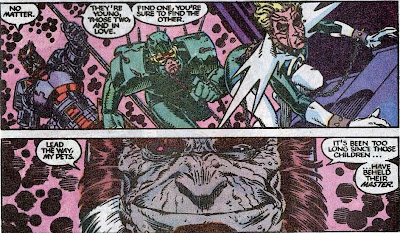 But don't think Ahab is the only one using mind control to get what he wants. Future Franklin isn't exactly above it either. Once he's finally met Rachel, he uses his powers to push some buttons. 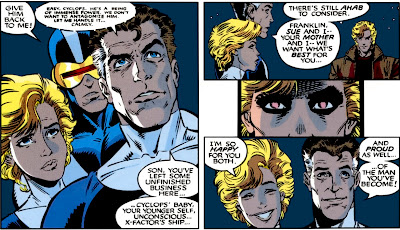 Rachel and Franklin manage to get away, only to be captured by Ahab. In the end, it takes the combined effort of the Fantastic Four, the X-men, Cable and the New Mutants and X-Factor to take the Houndmaster down. Ahab flees back into the future, leaving the heroes with quite a few problems on their hands. First and foremost, just who is future Franklin supposed to be? 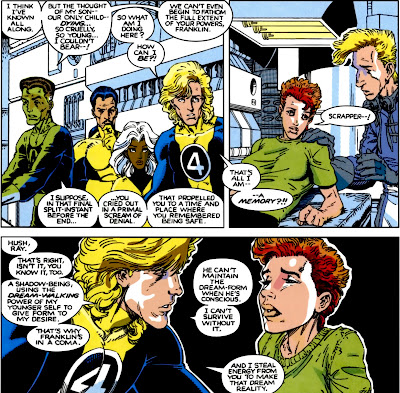 Sheesh, I've heard of relationships with moochers and leaches, but that's pushing it.

Poor Rachel is denied her shot at happiness, either way.And with only a few pages left in the final chapter of the story Chris Claremont pulls out the ol' Phoenix ex machina trick and uses Rachel's control of the cosmic force to hit the reset button. 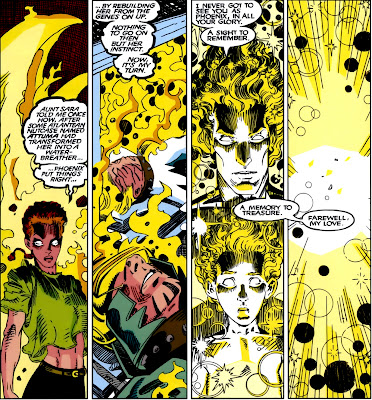 The Phoenix reverts Cyclops and the Invisible Woman back to their non-Hound selves and future Franklin releases his hold on his younger self, so all's well that ends well. Even though there are still some people worried the Days of Future Past are still ahead of them, the annual ends on a positive note. 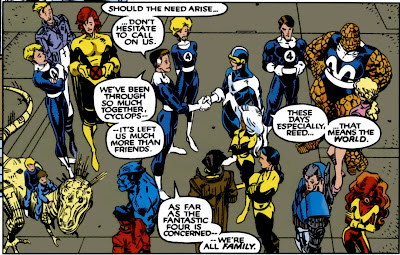 Posted by Clarmindcontrol at 6:38 AM