The fourth issue of Excalibur starts out in the offices of influental London banker Courtney Ross. She is quietly lamenting her relationship with Captain Britain that went sour after Brian Braddock mysteriously disappeared. Thinking him dead, she moved on with her life, but when Brian returned to the superhero scene, she found herself to be a target yet again... 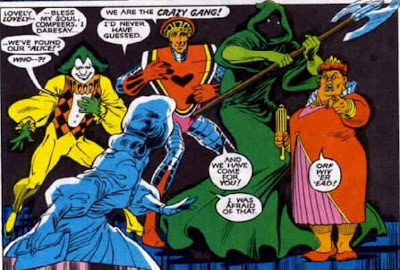 Meet the Crazy Gang, an Alice in Wonderland inspired band of villains that are as inept as they are colorful. It didn't take Courteney much effort at all to escape from their clutches. Fleeing from the bank, she thinks she's safe when a police car happens to pass by. 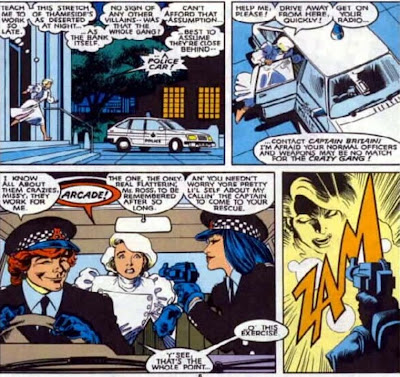 Alas, the car is driven by the real villain of the piece, Arcade. Using Arcade for this story actually makes sense, not only is he a well established X-men villain but he's also part of Captain Britain's rogues' gallery. By kidnapping Courteney, Arcade hoped to lure Captain Britain to his Murderworld for a rematch. Unfortunately, his way of luring the good Captain makes little to no sense. 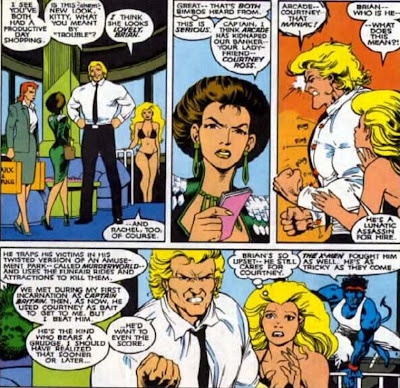 Rachel and Kitty were enjoying a day off, living out the tired cliche of what all young women love to do: go shopping. But, at the cash register they noticed their paper pounds didn't have the actual queen on 'em but the Crazy Gang's Red Queen. 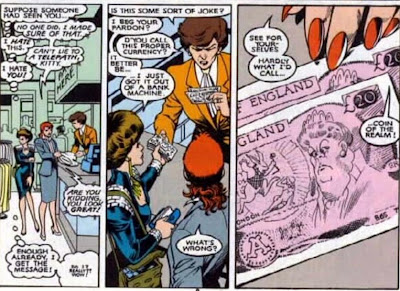 Now, from this they derived it was Arcade who was up to no good. A bit of a stretch, considering both Rachel and Kitty had never fought the Crazy Gang, nor did they have any knowledge about the Crazy Gang's recent alliance with Arcade. But hey, whatever gets you the furthest in those 22 pages a month, eh? 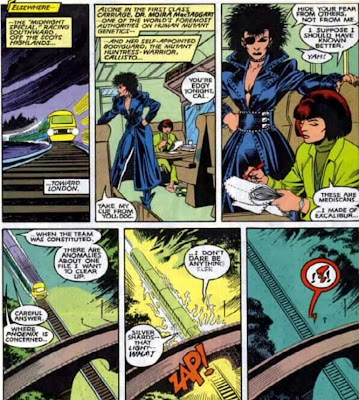 Meanwhile in a subplot that has nothing to do with mind control, but is still an interesting side note... Doctor Moira MacTaggert is travelling with her bodyguard Callisto to meet with Excalibur. Moira's found some anomalies in one of the team members' DNA which she wants to sort out. Nothing ever came of this, and not just because Moira, Callisto and the entire train were teleported off the face of the Earth.


If Claremont had gotten his way, it would have been revealed that the anomalous DNA readings meant Rachel didn't have a biological father. She would have been a Christ like figure, her mother Jean impregnated by the Phoenix Force acting like the biblical Holy Spirit. Sounds interesting, but still uncomfortably close to religious blasphemy for the PC 80s.


Getting back to the story at hand, it didn't take Excalibur very long to trace Arcade, the Crazy Gang and Courtney to an old, abandoned amusement park. But the fight didn't go exactly as planned, mostly because Captain Britain hadn't really figured out how to be a team player at that point. 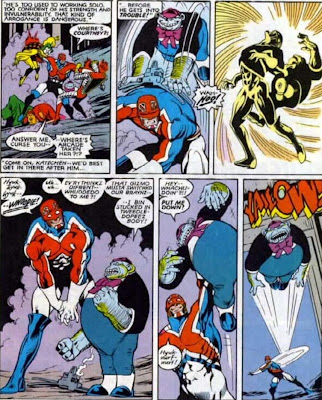 Using an advanced piece of technology of his own design, the idiot savant Crazy Gang member Tweedledope switched his mind with Captain Britain's, causing some confusion. Which only got worse when he used a similar device on most of the other Excalibur members. 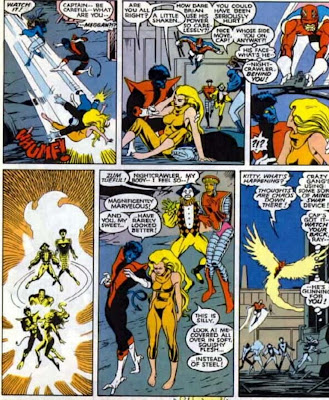 After Nightcrawler and Meggan got themselves swapped with the Crazy Gang's Jester and Knave, only Phoenix and Shadowcat were left in their proper minds and Captain "Tweedledope" Britain was hard at work to remedy that.

Admittely, as impressive as this looks, Phoenix is actually more affected by the psychic summons she receives from her baby brother Nathan Summers, covered in THIS entry. But that didn't mean Tweedledope's switcheroo tech didn't do the trick. 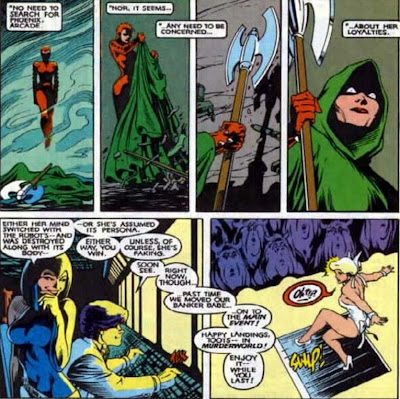 Never one to miss out on a brutal slaughter with zero odds of surviving, Arcade had Courtney Ross dressed up as the actual Alice in Wonderland, and the mind controlled Rachel was ever ready to obey the Red Queen's command to decapitate her. 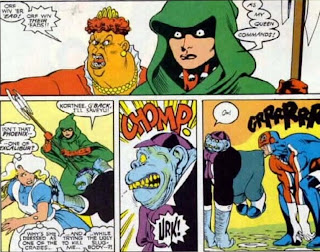 Yup... that's Tweedledope in the body of Captain Britain, biting the hiney of the actual Captain. Sure, why not. But, enough levity... Take us home, Shadowcat! 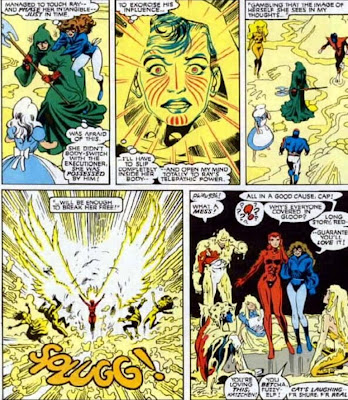 "Was afraid of this. She didn't body-switch with the Executioner, she was possessed by him! To exorcise his influence... I'll have to slip completely inside her body... and open my mind totally to Ray's telepathic power... Gambling that the image of herself she sees through my thoughts...Will be enough to break her free..."

...Geez, and they still wonder why narrative thought bubbles are dead and gone.
Still, Kitty saved Excalibur and Courtney and so far 4 of the published 5 issues of Excalibur relied heavily one one form of mind control or another. Wonder what issues 6 and 7 bring...

Well, stick to what you know, I guess.

Posted by Clarmindcontrol at 10:28 PM