When we last left the X-men, they were in the middle of Uncanny X-men # 160, an issue that pretty much exploded with sexual innuendo involving innocent young girls like Illyana Rasputin and Kitty Pryde.

Yes, that is a twisted and perverted version of Nightcrawler getting a little too familiar with little 8 year old Illyana. But who is responsible for bringing her here? Why, he'll tell you himself...

"Oh, yes, child... that is Nightcrawler... reshaped body and soul in the image of his true lord... Belasco!"

A powerful sorceror banished to the interdimensional realm known as Limbo, Belasco had quickly emerged as ruler of the demon hordes that resided there. But in order to regain favor with his masters the Dark Ones, he had a plan to allow them access to Earth via a special sacrificial ritual involving the innocent. And wouldn'tchaknow it... Illyana fit that bill nicely. 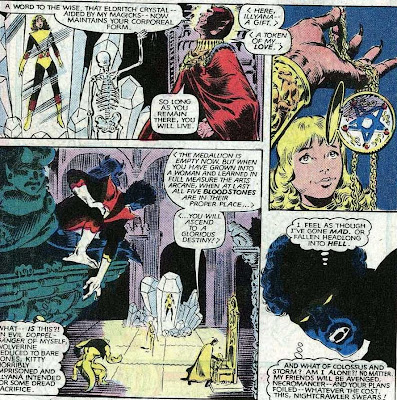 Yes, that *IS* Kitty Pryde's actual skeleton waving at her trapped form. Never let it be said Belasco is without a sense of humor, wickedt though it may be. Kitty looks on in horror as Belasco offers Illyana an empty medallion that will soon house five bloodstones... mystic gems created from parts of her soul that hold enough power to open a bridge from the Dark One's realm to Earth itself.

But salvation seems close at hand, as from a distance 'our' Nightcrawler watches the events and swears to avenge both the missing X-men and Belasco's captives. Little did he know the others were still alive. The light circles that brought them to Limbo separated them, but they were all relatively okay... Even though Storm was about to face no less than two of Claremont's other pet peeves: tentacle pornography and forced transmogrification of the female form...

Judging from the copy, the suddenly transformed Storm easily escaped the writhing, dominating tentacles by using the mutant powers and abilities of her teammates. However, this is how Ororo appears next...

"But what power can mold and shape me in the blink of an eye, as if I was little better than a lump of sculptor's clay? It was terrifying... yet I cannot deny that transformation saved my life."

Let's assume that whatever power shifted her form, also controlled her conscious mind so she was able to use the other X-men's powers effectively enough to escape. Waking up in a peaceful, green glade Storm looks around to see who's responsible for rescuing her.

Finding no one, she takes a refreshing dive in the lake as she prepares to get underway. Unfortunately, her costume is ripped to shreds so she is forced to wear the clothes she found in her room. As she flies off, she muses her savior must be a woman. And she's not too wrong, as a mysterious female figure watches on.

Meanwhile Nightcrawler is finally ready to confront his counterpart. It could have gone smoother. 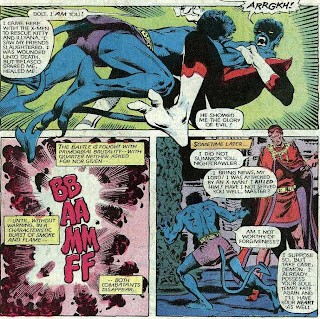 Poor Kurt. But kudos to Claremont for using Limbo's unique relationship with time and space. Linear time has little meaning there, which allowed for delicous little twists like the alternate Nightcrawler and Wolverine and Colossus discovering their own corpses, while none of them had been there before.

Wolverine and Colossus square off against S'ym, Belasco's head demon and enforcer. He proved to be more than a match for the two X-men, until the same mysterious woman that had aided Storm used Limbo's ever present light discs to teleport him away. 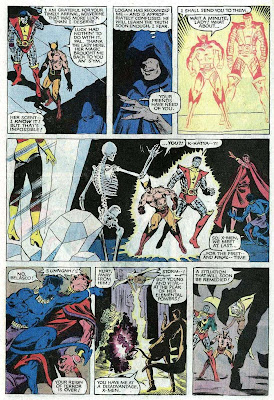 Grateful, the two heroes wanted to know who saved them, but she sent them straight to Belasco's throne room the minute Storm also appeared. Their sudden appearance gave Kurt the chance to drop the act and reveal he had been 'our' Nightcrawler all along. A shocked Belasco actually fled the scene, allowing the X-men a few vital moments of exposition.

The woman saving their bacon was actually an elderly Storm, trapped for decades within Limbo her weather control powers had waned, but her inherent magical abilities had more than made up for the loss of her mutant gifts. She had been fighting Belasco ever since and tried to get the X-men to leave Limbo before history would repeat itself. She had forced the team to chase after Belasco once, thereby condemning them to a lifetime of misery and pain inside the nether realm.

Determined to have things end differently this time, Storm the elder invoked seniority and forced the X-men to return home with Illyana just as Belasco and his reinforcements attacked again. Her magics proved more than a match for his followers, but as it turns out Storm couldn't keep Belasco himself at bay which caused this awkward situation...

Belasco tried with all his might to keep Illyana for himself... After all, he had big plans for her. But this is still a comic from 1982, which means a happy ending is pretty much a guaranteed safe bet, right? 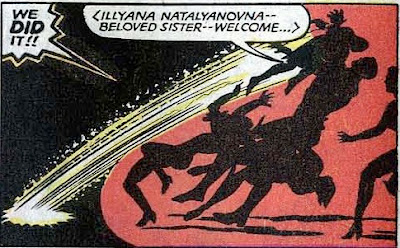 And so you did, but erm... isn't Illyana a little big for her eight years? 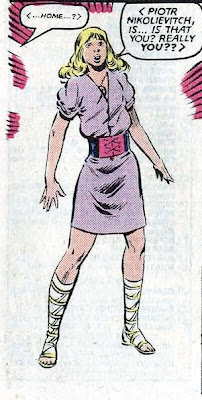 In the blink of an eye, the innocent little child had aged into a blossoming teenage girl who had trouble recognising her own brother. It seemed Limbo time had played a rather cruel trick on Illyana. Yet, in spite of the many questions surrounding her astounding growth spurt, Colossus was just happy to have his sister back in one piece... 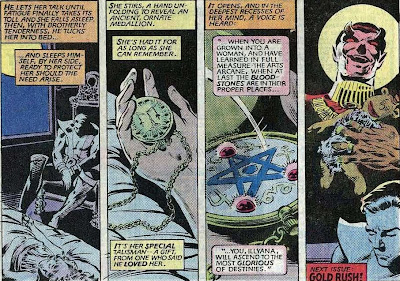 When sleep finally claims her, Belasco's medallion opens up as proof all is anything but right with not quite so little Illyana. The presence of no less than three bloodstones prove her soul had already suffered incredible and possibly irreparable damage... the image of a gloating Belasco ripping Illyana's toy bear to shreds remains a potent allegory for innocence lost.

But, what really happened to Illyana during her extended stay in Limbo? Claremont answered that question in the four part 1983 limited series Magik: Storm and Illyana, which we'll cover in part three of Mind Controlling Magik: Meanwhile In Between Time.

Posted by Clarmindcontrol at 1:44 AM