And then there came a time... a time most fans of Exiles feared... the moment Chris Claremont took over.

As any writer is wont to do, he wasted no time making the book his own. His first act was returning recently introduced member Power Princess to the Squadron Supreme of her own dimension. 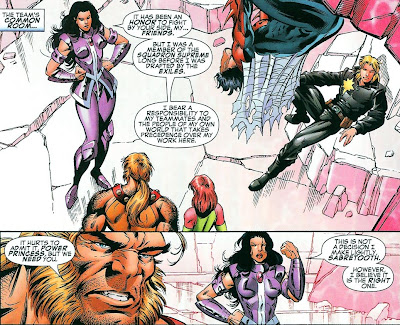 Then he made a point of subtly redefining the Exiles' mission statement. The team no longer observed and protected the multiverse... no, they were responsible for Claremont coined 'crosstime' and 'omniverse'.

Arguably a change in name only, but it did allow Claremont to link the Exiles to his other Omniverse related creations like Merlin, Mad Jim Jaspers, the Fury and last but not least omniversal guardian Roma and her Captain Britain corps. Speaking of Captain Britain, lets see who will be replacing the Princess... 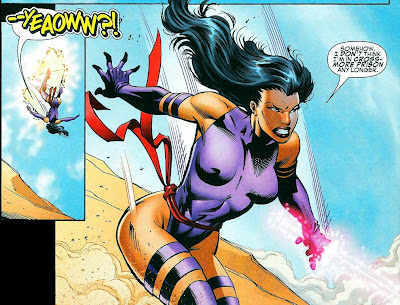 Well, at least the amount of purple in the team's uniforms remained roughly the same.

Meet Psylocke, fresh from 'our' 616 reality. Not only is Betsy Braddock one of the all time Claremont faves, she also happens to be the sister of Captain Britain and even a one time replacement Captain Britain herself so it's another tie to previously established continuity right there. This set things up nicely for a team up with the Excalibur series Claremont was also writing at the time. But that's a story for another time.

So why was Psylocke summoned anyways? Yes, Sabretooth claimed the team would miss Power Princess' super strength, but surely her brawn couldn't be all that stands between victory and defeat? Well... let's just see how the team did on their first mission without Zarda. 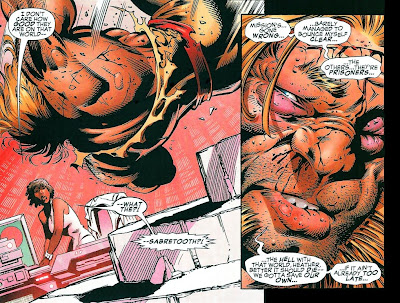 In a move reminiscent of 1975's classic Giant Sized X-men # 1, only one member of the team made it back to get help. In this case, it was Sabretooth and not Cyclops who returned to base and together with Heather 'Sasquatch' Hudson they scanned the multiv... Sorry, Omniverse... to find just the right person to help them out. As it turns out, it was Psylocke.

Credit Claremont for hitting the ground running and using established continuity to drive the story forward, even if it didn't directly involve any of his own stories. Case in point: Psylocke's reaction when seconds after landing in the Exiles' desert room, she encounters Sabretooth.

Keep in mind that in the 616 universe, Sabretooth almost killed her twice. Once during the Claremont penned Mutant Massacre storyline and a second time when Scott Lobdell had Psylocke step in to save X-Force's Boomer. So, how would you react when you find yourself in strange surroundings with a hated enemy approaching? 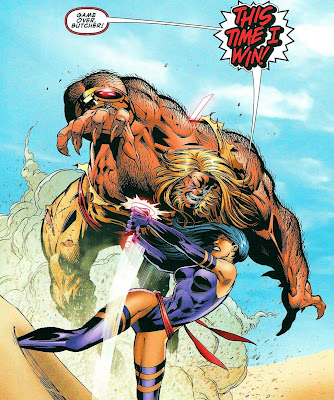 Yeah, that seems about right.

After all the usual misunderstandings had been cleared up, Psylocke agreed to help the Exiles out and joined Sabretooth in the rescue mission. So, what had caused all the troubles? 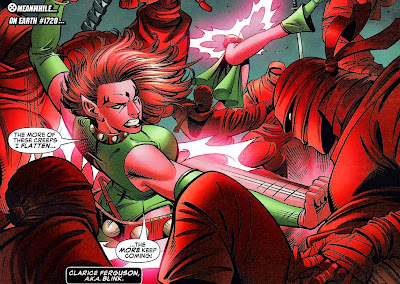 Seems like the Exiles had encountered heavy opposition from the ninjas of the Hand. A nuisance to be sure, but nothing they usually can't handle. What could possibly be... 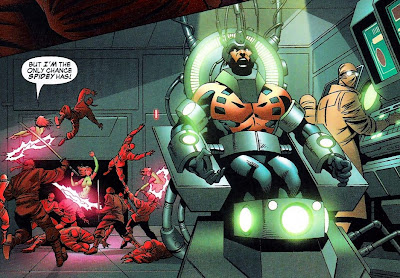 Ah, yeah... this is a Claremont comic now. So 'adventures' are known as 'capers', the multiverse is decidedly omni and mind control is for everyone. Yes... for some unexplained reason, the Exiles ran right into this trap. Even the ones usually too lucky for that. 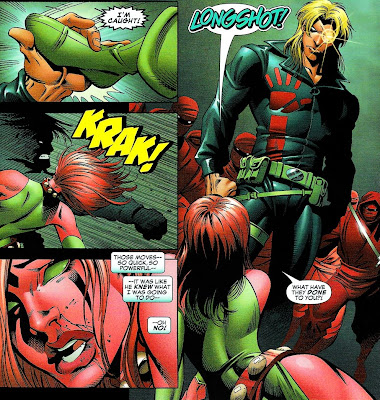 A mind controlled Longshot... right down to the nice little touch of altering his belt buckle to the 'H' for 'Hand' or even 'Hydra', considering who's the villain of the piece... 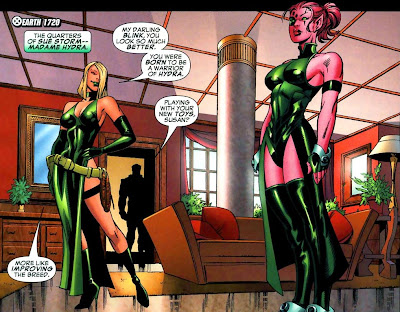 In this reality, Susan Storm isn't known as the Invisible Woman but actually the ruthless Madame Hydra. Forget Viper, Susie is as good a sadistic baddie as one could hope for. And then you haven't even met her lover... 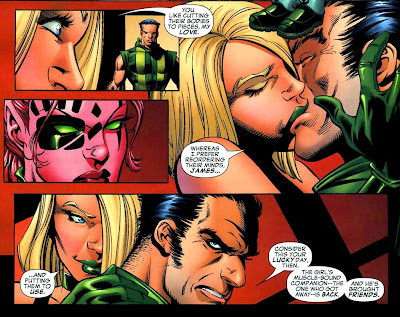 "You like cutting their bodies to pieces, my love. Whereas I prefer reordering their minds, James... And putting them to use."

After turning to evil and separating from her husband Reed Richards, Sue has used mind control technology to further her goals of total world domination. But, what was the mission the Exiles had to accomplish in this reality anyway? Surely, it has to be something as straightforward as 'beat the baddies and move on", right? 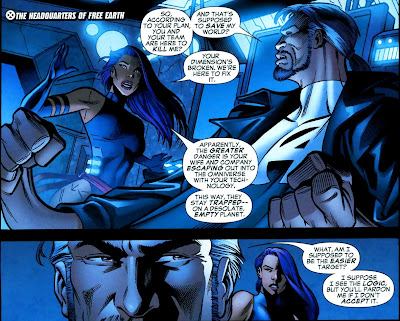 Well, lemme save you a dry summary of all the issues through # 94...

Reed doesn't die and Madame Hydra escapes into the Omniverse, along with her lover Wolverine and their partner the Slaymaster. The mind control she subjected Longshot, Spider-Man 2099 and Blink to eventually fades, while the desolate Earth mentioned earlier suddenly becomes a whole lot less desolate when a necklace worn by Reed's daughter Valeria Richards turns out to contain 2.5 billion people Reed wanted to save from the tyranny of his ex-wife.

So, all is right in the world.

Well, in thát world at least.

Posted by Clarmindcontrol at 9:45 PM