Mind Control Is Anything But The X-Factor Part II: Moon River, Mind Control For Over A Mile...

It's 1991 and Peter David is getting ready to take over X-Factor...

So in the second part of Mind Control Is Anything But The X-Factor... Chris Claremont continues to tie up all the loose plot threads from the 60+ issues of Cyclops and co before his brother Havok can head up David's new government licensed X-Factor.

When we last left the original team, their archenemy Apocalypse had struck a serious blow by having his Dark Riders attack them in their own base, the sentient Celestial machine Ship. The Dark Rider called Harddrive knew how to deal with that... 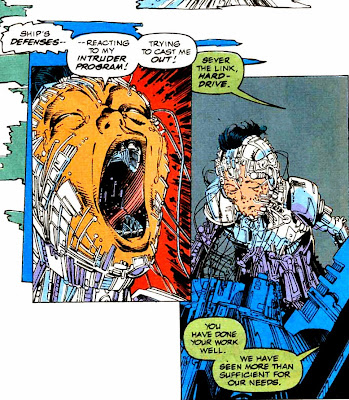 But, if at first you don't succeed... try, try again... Once Harddrive was inside Ship, she tried again to assume control over its programming. With decidely more success... 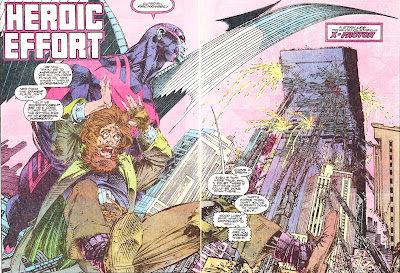 Ah, heck yeah... Ship, an entity the size of a skyscraper, suddenly started wrecking half of Manhattan in the truly confusing opening spread to issue # 66. While the Avengers and the Fantastic Four were outside trying to protect innocent bystanders, another war raged on inside. The main struggle is between Ship and his 'mind' controlling...

Apocalypse had managed to enslave the Celestial vessel for centuries before X-Factor came along to liberate it... so it tried valiantly to resist his former master's demands, eventually making the ultimate sacrifice. 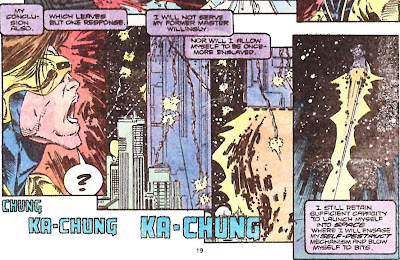 Yup... that's Ship blasting off into space to self destruct with X-Factor... Apocalypse and the Dark Riders had already abandoned, erm, ship... but what's worse: they'd also kidnapped Scott's son Nathan Summers. Apocalypse had plans for the small baby, but X-Factor seemed utterly unable to stop him... especially because their headquarters literally blew up around them in the closing pages of issue # 66.

Thankfully, issue # 67 had the Inhumans of all people show up to rescue X-Factor. 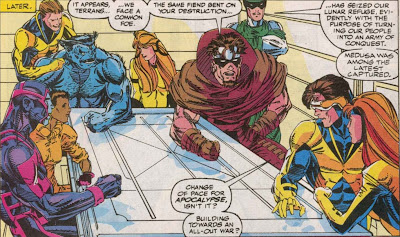 Yes, it seemed Apocalypse had taken over the Inhuman capital of Attilan on the Moon, casting out its rulers, the royal family. Joining forces, the two teams realised they couldn't just barge into Attilan. The Inhumans didn't want to hurt their subjects, not to mention their kidnapped queen Medusa... and X-Factor is understandably concerned for baby Nathan's safety as well.

Cleverly employing holograms to evade Apocalypse's main forces,  X-Factor and the royal family manage to penetrate En Sabah Nur's inner chambers in issue # 68... Yet, before they can stare down the one who cannot die, they learn the fate of Medusa.... 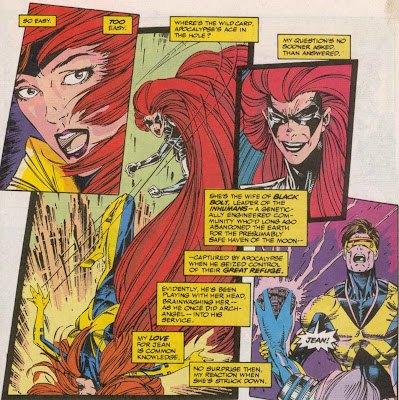 Ahhh, yeah... True to Claremontian fashion, the mind controlled Medusa chose to dress in black leather attire, a sure sign of her switched allegiance. But she isn't the only one susceptible to the immortal one's influence. 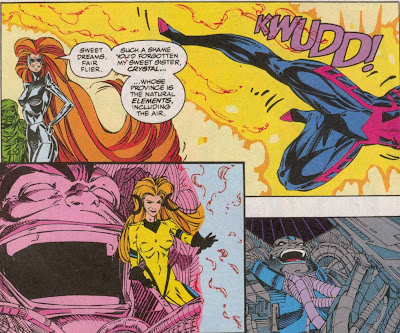 Yup, Apocalypse is also mind controlling Crystal at this point, with no apparent set up or explanation... A simple 'just cos' is all we have to go on as Chris Claremont's X-Factor arc draws to a close and Apocalypse's true motivations are revealed: the villain has infected Scott's son Nathan with a techno organic virus that threatened to consume him. This invasive process was so painful, Nathan's latent telepathic powers kicked in and drew Jean on to the astral plane once again where she had to fight for the little one's soul... 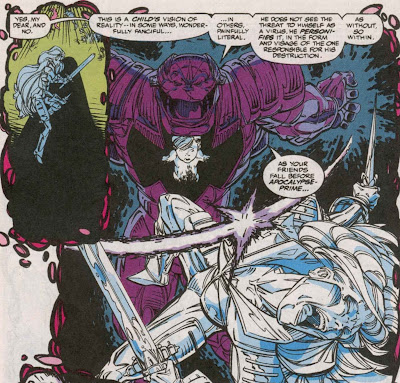 The techno organic virus was so potent, it took the shape of its creator Apocalypse, young Nathan symbolically trapped within his monstrous form. In the end, Jean managed to restore her old psi-link to Cyclops and together they continued to fight for the child. Eventually, Cyclops' eye blasts manage to cast Apocalypse out... but the baby remained infected by the rapidly progressing techno organic plague.

Luckily, Claremont introduced a cop out to all this drama a few issues earlier: Askani, a weird woman from the future claiming to be of the Summers' clan who happens to worship the little babe, calling him the chosen one. Scott found himself faced with a terrible decision: either watch his child die in the present or allow Nathan a future by letting Askani take him to, well, the actual future. 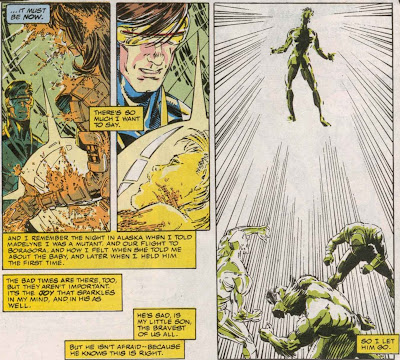 And with that, Cyclops releases his only child to the care of the Askani brotherhood hailing from the year 3000. A move that would result in the creation of Cable down the line, but for now Chris Claremont had succeeded in his task: without a headquarters or any ties and responsibilities left to speak of, the members of X-Factor were more or less pushed to rejoin the X-men at professor Xavier's school in Westchester county.

For more on their first real adventure as part of the team, click HERE.

Posted by Clarmindcontrol at 12:54 AM