Sometimes the most whimsical of tales can prove the most fruitful... Case in point: 1981's Uncanny X-men # 153, better known as Kitty's Fairytale. 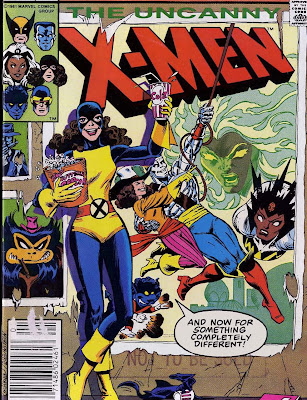 "And now for something completely different!"

With all due respect to Monty Python, Claremont did in fact use a completely new narrative when he had Kitty Pryde tell a bedtime story to Colossus infant sister Illyana Rasputin. The fairy tale featured all the X-men in different, yet familiar roles.

Kitty played a swashbuckling pirate, Colossus was her lover and comrade in arms, Wolverine was a loveable (notice the tiny purple hat) savage, Storm showed up as Windrider, a genie trapped in a bottle (nice reference to Storm's claustrophobia).

Nightcrawler served as inspiration for the cuddly creature called Bamf and even the X-men's trusty SR-71 Blackbird jet played a part, as the giant dragon Lockheed who semi grudgingly carried everyone around on his back.

The villain of the piece was Jean Grey, who got possessed by the evil Phoenix entity and threatened to destroy the world. In the end, Kitty and the others managed to defeat Phoenix and restore Jean to normal. One can't help but notice how Claremont used this opportunity to retell the ending of the original Dark Phoenix Saga the way he had planned before then editor in chief Jim Shooter stepped in.

Still, for such a sweet, little done in one story, Kitty's Fairy Tale had quite a few lasting effects.

For instance: the notion of Kitty having a temperamental dragon for a pet apparently tickled Claremont, eventually culminating in the introduction of Lockheed in 1983's Uncanny X-men # 166. 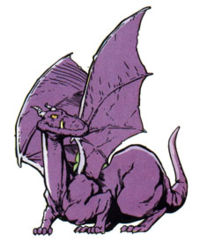 Another unexpected break out character was Bamf. Artist Dave Cockrum was so taken with the cartoonish depiction of Nightcrawler, he created an entire race of these fun loving imps when he wrote the 1985 Nightcrawler limited series. The Bamfs have proven popular ever since and are nowadays popping up regularly in the pages of Wolverine & The X-men. 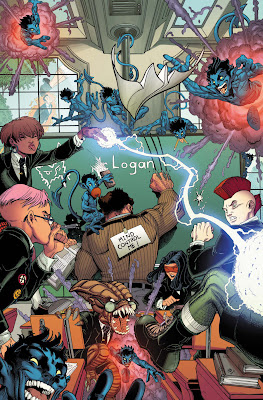 But it all started with this scene from Uncanny X-men # 168. 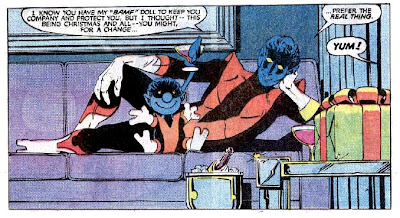 All in all, the impact of Kitty's one off bedtime story had not been ignored by both fans and creators. And, as Uncanny X-men Annual # 8 would prove, Illyana hadn't forgotten it either. Which says a lot, considering she spent most of her childhood and adolescene fighting for her life as a demon's apprentice in Limbo.

Nevertheless, after a campfire cook out with the X-men and the New Mutants, Illyana was all set to tell the unofficial sequel to Kitty's fairytale...  But this time, there was some mind control involved. Which makes sense, considering it was basically a re-telling of Kitty's rather violent history with Emma Frost, the telepathic White Queen of the Hellfire Club... IN SPAAAAACE! 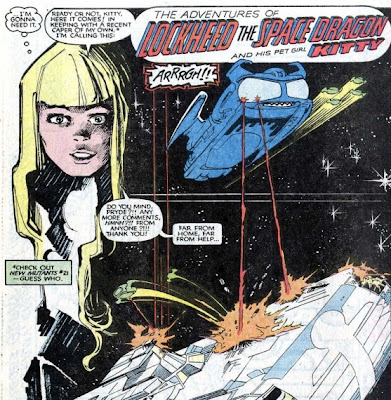 In this particular tale, Kitty is the only child of the shipmaster of the giant space ship Chicago, that found itself under attack by the Hellfire Club somewhere in deep space. The ship was boarded and soon the evil leaders of the Club presented themselves. 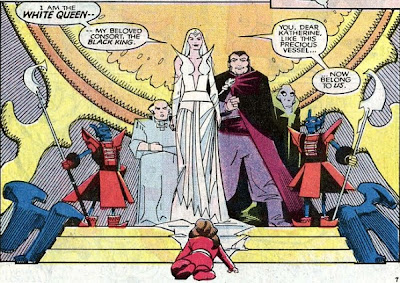 "You, dear Katherine, like this precious vessel... Now belong to us."

When Chris Claremont is writing, you can be sure this means there's going to be at least a little mind control. And yes, despite Kitty's bravado... The White Queen tried to claim the young child. 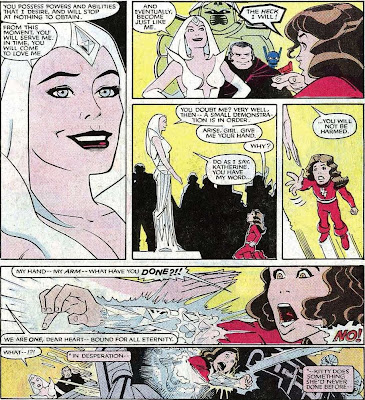 Its interesting to note that 15 years before Grant Morrison would turn Emma Frost into a living diamond in New X-men, Claremont already incorporated that element into her backstory. The shock of being enslaved and transformed caused Kitty to manifest her phasing abilites and she escaped. She managed to join some space pirates led by the dragon Lockheed who sought to oppose the White Queen and the Hellfire Club. They accepted Kitty as one of their own and in the months that followed, trained her so she could have her inevitable revenge... 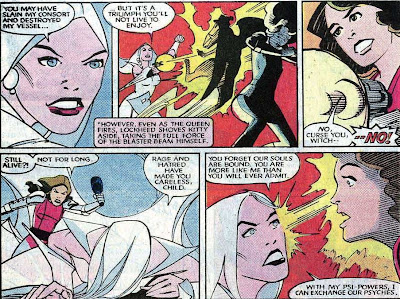 "With my psi-powers, I can exchange our psyches!"

A nice nod to the truly godawful story in which Emma Frost, allegedly among the world's premiere telepaths, used a gun straight from the Silver Age to exchange minds with Storm. For more on that titanic clunker, click HERE or read on to find out what happens next... 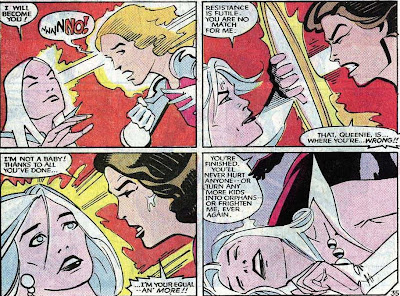 Using her recent training and innate willpower, Kitty was able to overcome the evil White Queen and they all lived happily ever after.

Ow, except for that small, yet incredibly awkward hint Claremont dropped after Illyana's tale, suggesting that Kitty and Lockheed's relationship went a bit deeper than the obvious master/pet one. 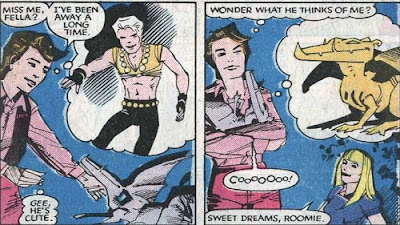 Posted by Clarmindcontrol at 3:06 AM

As someone who grew up on the 90s X-Men cartoon, I can say that this story also made it into that X-Universe. However, therein, it was Jubilee telling the tale, since Kitty never made the TV show (except in the bizarre, late-80s pilot episode "Pryde of the X-Men," in which Wolverine is inexplicably Australian). And seriously: who thought it was a good idea to include Jubilee rather than Kitty? Awful choice.

For instance: the notion of Kitty having a temperamental dragon for a pet apparently tickled Claremont, eventually culminating in the introduction of Lockheed in 1983's Uncanny X-men # 166.

For what it's worth, I've always heard tell that Paul Smith drew Lockheed into the issue on his own, the visual of which then tickled Claremont, and he later had Smith bring the dragon back, at which point Claremont connected the actual dragon to the one in Kitty's story by having her name him Lockheed.

Just wanted to point out that Smith deserves some of the credit/blame for Lockheed. :)