So, who knew Chris Claremont ever wrote the sensational... Captain Marvel?

I know I didn't... Thankfully, Chris' Wikipedia bibliography educated yours truly considerably. Yes, Claremont penned the September 1976 issue of Marvel's bi-monthly space epic in which so much happened I got lost... during the recap page. See how you do. 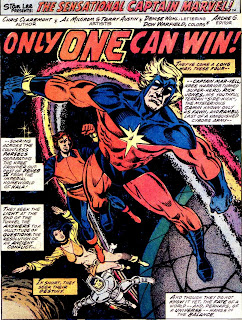 Frankly, Captain Marvel # 46 is a bit of a convoluted mess, even for the uneducated... which isn't Claremont's fault considering he only wrote this one issue that was supposed to cap off a multipart epic started by Steve Englehart and Al Milgrom. To give you an idea just how out there this tale was... Englehart had Captain Marvel and his companion Rick Jones ride mechanical cattle through space only three issues earlier.

So, lets throw common sense out the nearest airlock and focus on condensing the story at hand. Captain Marvel is a rogue Kree officer who rebelled against the rule of his commander, the collective  mind known as the Supreme Intelligence. The Intelligence perceives Earth as a threat and seeks to destroy her, but both Captain Marvel and his young earthling sidekick Rick Jones struggle to prevent this, aided by people who for the sake of this review don't really matter that much.

As Marvel's band of insurgents hurtle through space towards the Kree homeworld of Hala, they are intercepted by the Intelligence Supreme aboard the imperial dreadnought Star Of Vengeance. Their enemy arrived in the most powerful battlecruiser in the fleet to take them out.

And in true grand villain style, the Intelligence only takes action after some overly wordy recap/exposition... 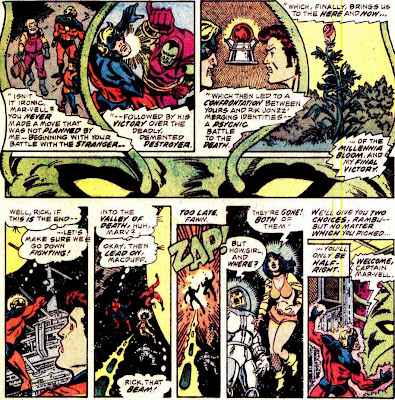 Both heroes are zapped away, courtesy of the Star Of Vengeance's teleportation systems. Captain Marvel finds himself on Hala where he has to face the physical representative of the Supreme Intelligence... the Supremor. 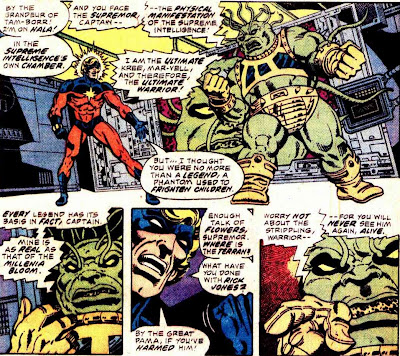 Ah, yeah, the legend of the Millenia Bloom... we'll get to that in a bit. The Supremor was a tad too occupied with Captain Marvel, who in turn was upset about the disappearance of Rick Jones. The Captain's partner however, was teleported to the Star Of Vengeance and was about to face an oddly familiar foe.

Yeah, lets just say that by 1976, Chris Claremont characters hadn't quite mastered the art of natural exposition yet.

The Supreme Intelligence had become aware of the change in status quo Captain Marvel and Rick Jones, or Rik Jonzz rather, had recently gone through, In the old days, the two of them were bound together courtesy of the negabands. While one of them was running around the galaxy, the other one's body would be held in suspended animation inside the Negative Zone.

They could only switch places when the one active in normal space/time banged the bangs together. Basically, think DC's Firestorm, the Nuclear Man with fancy jewellery. However, not too long ago Rick tired of his time share existence and entered the Negative Zone, courtesy of Reed Richards, to retrieve Mar-Vell... They decided to share the power of the Nega bands by each wearing one.

However, this new arrangement had a weak spot the Supremor was about to exploit... A massive demand on the bands' energies from one user, meant the other was left virtually powerless. And wouldn't ya know it, the Supreme Intelligence had his Supremor bodies attack both Rick and C.M. at the same time, sparking a desperate power struggle.

By the by, all of these battle scenes and conflicts were solely meant as a distraction so the real villain could prepare and show itself... a villain that, as it turns out, had all the added threat level of a potted plant. Meet the aforementioned Millenia Bloom, a once in a generation sprout that had the Intelligence up in arms... obviously unaware of floral seed preservation and cloning... 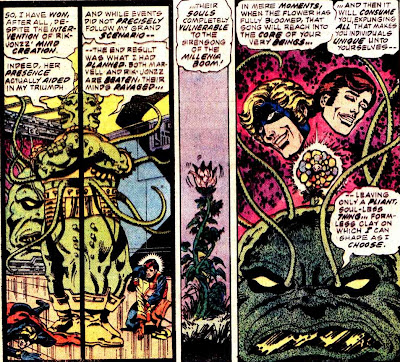 "In mere moments, when the flower has fully bloomed, that song will reach into the core of your very beings... and then it will consume you, expunging all that makes you individuals unique unto yourselves..."

Man, that early days Chris Claremont sure was wordy... Yet, in the middle of worlds living and dying, the Kree supreme commander's biggest concern was the well-being of a plant, that somehow seemed capable of miraculously mind controlling the two of them. But, wait, there's more! 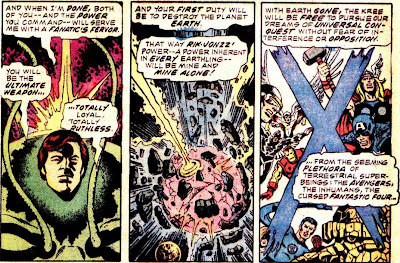 By mind controlling Rick Jones, the Supreme Intelligence hoped to control the Destiny Force it had awakened in him a few years back during the Kree/Skrull war. But because every Earthling had the capacity of accessing this all powerful energy source, the Supremor wanted to destroy Earth. It also helped to get those pesky, meddlesome superheroes out of the way.

Naturally, it didn't go as planned... 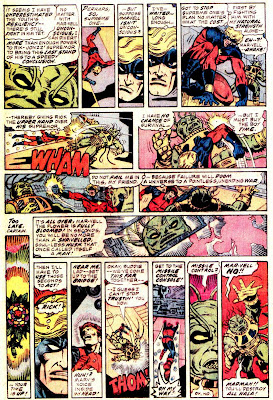 Nowadays, a plot like this may seem overly familiar and even cliched, but keep in mind that this was written in 1976, Star Wars had yet to premiere. That actually makes this kind of space opera seem ahead of its time. Incredibly hokey, sure, but innovative all the same.

Captain Marvel uses the mental link he shares with Rick thanks to the negabands to send him a message: access missile control and fire the ship's rockets into Hala's sun. This caused a massive solar flare that threatened to destroy the entire planet... and well, just read... 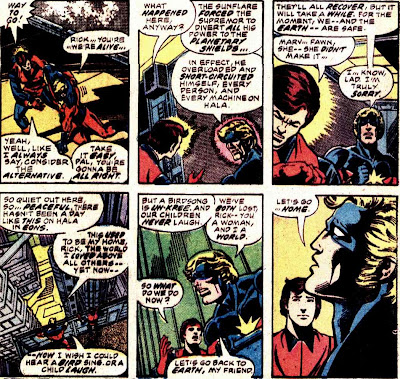 So, by firing a few missiles into the sun, the entire Kree race shut down? Does this mean the Supreme Intelligence controls the minds of every single living thing on Hala? And where did both Supremor androids conveniently disappear to? Also, what of the soul sucking influence of the Millenia Bloom? Why did it suddenly stop having an effect? Where was that plant located anyways, if it was to influence both Rick and C.M. while the two of them were thousands of miles apart?

All in all, Captain Marvel # 46 is riddled with plotholes big enough for a stampede of Supremors to fit through. To be fair, Claremont only had 17 (!) pages to wrap up an ongoing storyline in what was essentially a fill in. That didn't stop the editors from using the closing captions to appease any exasperated readers, tho...

Posted by Clarmindcontrol at 1:07 AM