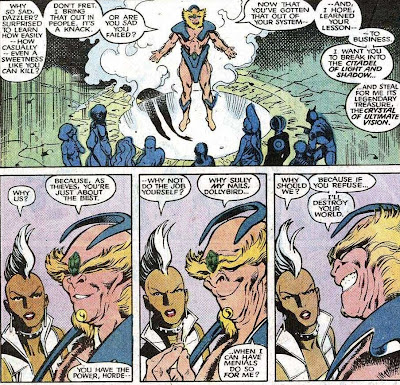 "I want you to break into the Citadel of Light and Shadow... and steal for me its legendary treasure: the CRYSTAL OF ULTIMATE VISION."

How's that for an instant recap, then? The supervillain Horde abducted the X-men and the visiting Captain Britain and Meggan to heaven knows where to do his dirty work. Agreeing to get this crystal for him, the team went inside the citadel and quickly realised they had entered something of a death trap when the entrance slammed shut behind them.

Wolverine set out on his own, trying to track the crystal while the rest of the team stuck together as they made their way through the citadel which appeared to have mind controlling capabilities. All of the X-men were presented with their ultimate desire, in an attempt to lure them away from reality and into the grasp of the citadel's consciousness...

Rogue was the first to fall prey to her deepest wishes... to actually live the life of a normal southern girl, unburdened by her mutant powers, free to touch whoever she wanted. 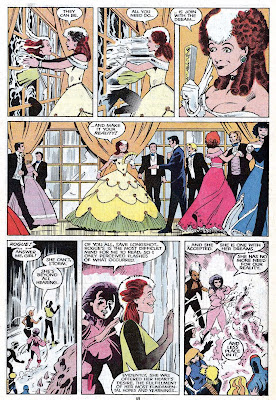 Giving in to her desires, Rogue disappeared... apparently absorbed into the citadel itself. But she was only the first to fall. Havok was next, as the structure preyed upon his growing frustration over his powers. Havok constantly converts solar energy into plasma, which means he has to be alert at all times lest his energy levels spiral out of control to cause untold devastation. In the fantasy presented to him, Alex finally goes all out and turns into an actual star, inadvertently killing his teammates. 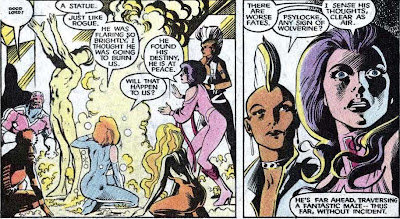 Two done, so many more to go. The next X-man to disappear is Longshot. He isn't tempted by anything at all, the citadel seemingly just absorbs his essence. 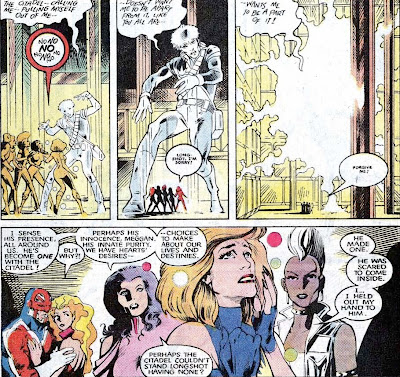 Of course, Psylocke's explanation for Longshot disappearing into the citadel makes little to no sense. Claiming the citadel couldn't stand Longshot not having any innate heart's desire doesn't fly, not with  Meggan right there... As an empathic metamorph, a creature whose very purpose is becoming whatever another person desires her to be, she's the textbook definition of someone lacking a hearts' desire. But hey, lets not allow a little pesky thing like logic to stand in our way.

Longshot's disappearance caused Dazzler to throw a tantrum and run off... which allowed the citadel to undermine her already shaky self confidence with an array of roads not taken. 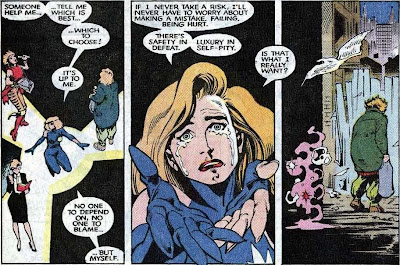 Alison Blaire finds herself at a crossroads, presented with various versions of her life. This played nicely into her doubts about her 'career' as a superhero. She never really felt comfortable as an X-man, not when there was still the chance she could be the pop star she always dreamed of... And, failing that, living a normal life as a big time lawyer, the way her father raised her to be... Yet, there was also the nagging fear of total self destruction, represented by a vagrant baglady Ali in the alleys.

In the end, her inability to choose a single path condemns Dazzler to be taken over by the citadel. But in all fairness to Claremont, he really knew what he was doing. This seemingly throwaway dream scene was revisited a good two years later in 1989's Uncanny X-men # 246, when Ali used her light powers on the Siege Perilous and got a view of some very similar alternate versions of herself. 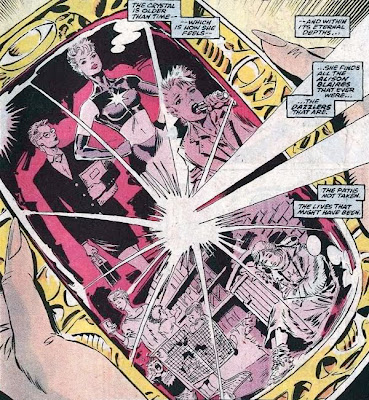 Getting back to the story at hand... With Dazzler out of the picture, the number of active X-men was dwindling fast. Next up were guest stars Captain Britain and Meggan who got suckered into believing they could have a normal life and even tried to include Psylocke into their idyllic, small town version of reality. Unfortunately, Betsy had an... ironclad... vision of who she was supposed to be. 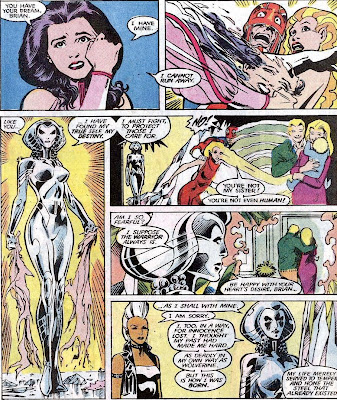 In an interesting twist, Psylocke turned into her heart's desire yet didn't get claimed by the citadel like the others. She and Storm pressed on in their search for the crystal, eventually finding it right before Storm got tempted as well by a dream figure of her best friend, the Japanese daredevil ronin thief Yukio. 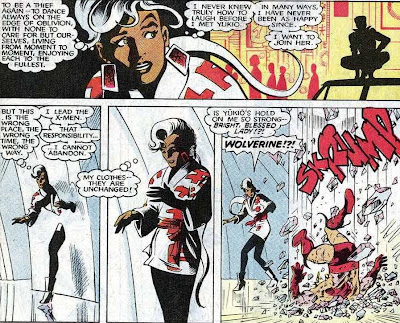 Storm proved powerful enough to withstand the temptation of outright embracing her idealised existence, despite the obvious impact it had on her. Meanwhile, Wolverine had clawed himself free from a similar fantasy involving both Mariko and Yukio before crashlanding near Storm. 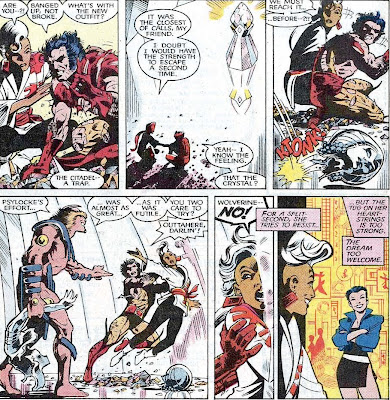 They both scramble to get to the crystal, when Horde all of a sudden shows up dragging along Psylocke's disembowled robotic form. Wolverine instantly decides Storm needs to survive by shoving her back into the mind control heavy dreamworld she denied only moments earlier.

And this is where the plot absolutely abandons all sense. Why is Horde even inside the citadel, within arms' reach of the prize when the entire story seemed based on the fact he couldn't get to the crystal himself?

But if you think that's bad... take a look at what happens next. Wolverine fights Horde, but loses... badly. How bad is it? Well, Horde rips out Wolvie's heart just to watch him die... Yet, tearing Logan apart turns out to be the worst thing Horde could have done, as a speck of Logan's blood lands on the crystal and an incredible transformation takes place. 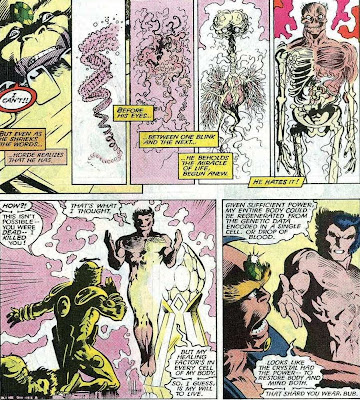 Yup... the crystal managed to resurrect Wolverine from a single drop of blood... Ignoring for a minute such painfully awkward repercussions like the question why Wolverine regenerated his adamantium skeleton while it was artificially grafted on in the first place... the newly revived Logan yanks the big crystal from Horde's brow and wins the day. As the villain shrivels away, Wolverine threatens to get overwhelmed by the influence and might of the crystal...which turns out to be able to alter reality. 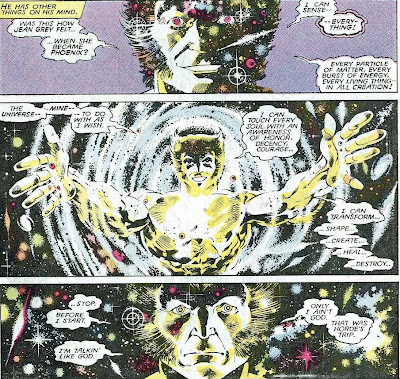 Wolverine is about to mind control all of existence before he realises what he's getting himself into and stops before ever changing a single thing. A remarkable feat of restraint, even though Logan's inner monologue does manage to raise an eyebrow or two. 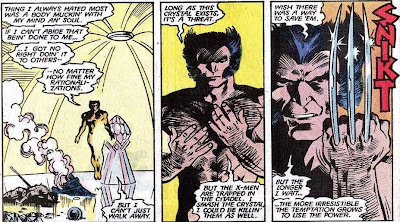 "Thing I always hated most was a body muckin' with my mind an' soul. If I can't abide that bein' done to me...I got no right doin' it to others... No matter how fine my rationalizations."

Wolverine destroys the crystal, thereby returning the X-men back to life and as the citadel explodes, they all find themselves back at Xavier's, safe and sound but unsure if what they had experienced was all that real. It sure felt like a dream, after all. Claremont put all of that to bed in the final page of the annual... 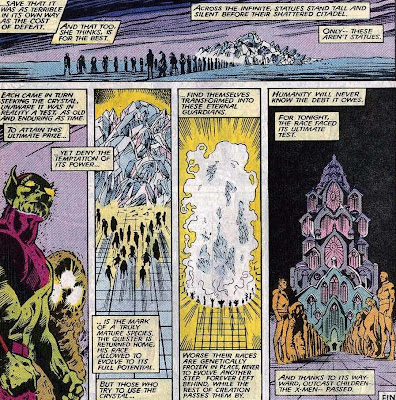 Posted by Clarmindcontrol at 4:05 AM