Now, before we were so rudely interrupted by time, circumstance and a general sense of apathy... We're back for a bit to cover one of Claremont's early 80s tales. Lezzz crank one out for ol' times' sake. But oh my, I don't remember how to do this...! 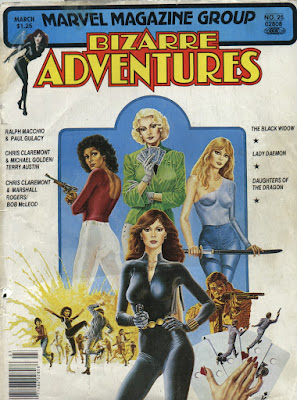 Then again, covering Chris Claremont's mind control shenanigans is pretty much like riding a bike. You never really forget, if only because both come down to peddling a simplistic going-through-the motions shtick. Though one usually don't wear black leather slave collars while cycling.

Today's entry is from March 1981's Bizarre Adventures I#25 and features Chris Claremont's favorite late 70s/early 80s pet characters the Daughters of the Dragon. He already had them addicted to heroin and reduced to an existence of subservient sex slaves in Deadly Hands of Kung Fu and now he penned a new story for them in Bizarre Adventures, a Marvel book aimed at adult readers that allowed creators to cover themes the Comics Code Authority would normally balk at. 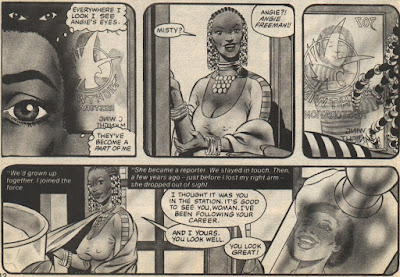 "Everywhere I look, I see Angie's eyes.
They've become a part of me."

My goodness, you can already tell this isn't a Code approved book by the shamelessly erect nipples that Ms. Angie Freeman is sporting. Angie's an old friend of Misty's who holds a very strange sway over her. Almost like she hypnotized Knight when their eyes met during a supposedly random encounter. Now, Angie suddenly shows up at the Nightwing Offices.

That can't be a coincidence, can it? But hey, Angie's a friend so let's have a drink and catch up... 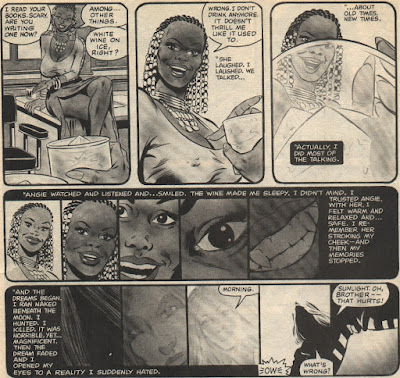 "The wine made me sleepy. I didn't mind. I trusted Angie.
With her, I felt warm and relaxed and... Safe.
I remember her stroking my cheek... And then my memories stopped."

Nowadays, lines like that tend to make a body whistle the theme to the Cosby Show. But enough topical "humor" about date rape. After Misty dozes off at the office, she's found the next morning by Colleen who simply thinks her partner is a little hungover when Knight feels weak and groggy. But when Misty goes into the bathroom to freshen up, we learn it's a tad more serious. 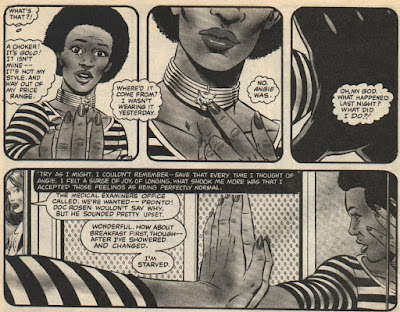 Oh my God. What happened last night? What did I do?!"

Misty doesn't have too long to wrack her brains trying to get an answer, nor does she know why Angie put an expensive looking (slave) choker on her. The Daughters of the Dragon are called in to continue the case they were working on before. One of their informants, NYPD detective Dominic Ferrara, wound up dead investigating the curious drop in crime in his neighborhood. When he got too close, Angie had him killed.

Y'see, Angie's a vampire. And a lesbian, but that's neither here nor there. Ten years earlier, her brother Tom brought a European vampire back homo to New York with him where the local residents struck a deal with the undead killer. They offered him safe haven, if he promised to help them clear up the crime ridden neighborhood. The vampire agreed to the deal under one condition: every five years the locals had to pick one of their own to become a vampire too. Angie was the first sacrifice.

Even though the original vamp conveniently died off panel in a fire, Angie's still honoring the deal. Now, with another five years almost passed, she's decided she wants to turn her old friend Misty Knight. And she's not exactly subtle about it. 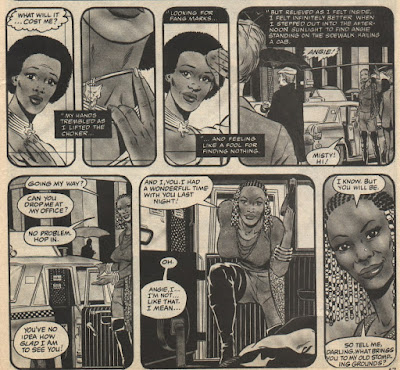 A lesbian or a member of the undead? Man, Chris Claremont's not even trying to be subtle with his metaphors here. And of course, having Misty already somewhat under the vampire's sway makes for some thrilling, supposedly sexy scenes when Knight tries to fend off her would-be rapist. 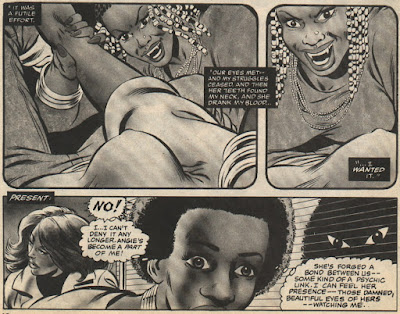 "Our eyes met... And my struggles ceased. And then her teeth found my neck.
And she drank my blood...
... I wanted it"

Long story short... Angie's got her mental hooks 'n claws in poor Misty's mind (and the fang marks in her neck). Eventually she even abducts her in preparation for the induction ritual. But she also makes sure to bring Knight's partner Colleen Wing, figuring she wants to "know" the sexy samurai as well. 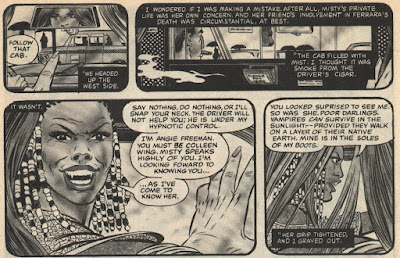 "Say nothing, do nothing or I'll snap your neck.
The driver will not help you; he's under my hypnotic control"

Angie takes both Colleen and Misty to her headquarters but the Daughters manage to escape. However, they're chased by Angie's mentally controlled Wolfpack and what's worse: Misty starts acting as cold and sadistic as Angie and even abandons Colleen who defeats the Wolfpack on her own but collapses from the effort.

It takes a little more than that to keep a good shogun down, so for the final showdown Colleen puts on "the equivalent of body armor" along with a big choker around her neck to protect herself. She then goes to Angie's neighborhood where the ritual is in full swing. 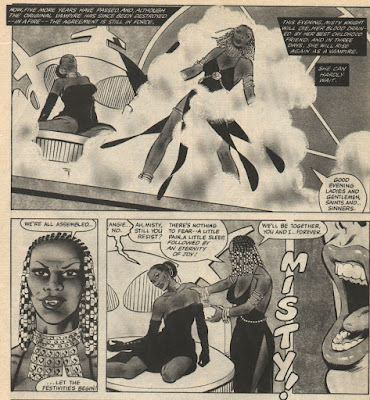 Even drugged and under the vampire's mental influence, Misty still struggles to break free. Her fight would have been useless if not for Colleen. Ms. Wing cut her way through the crowd and briefly succeeded in freeing Misty. But the vampire's control is strong... 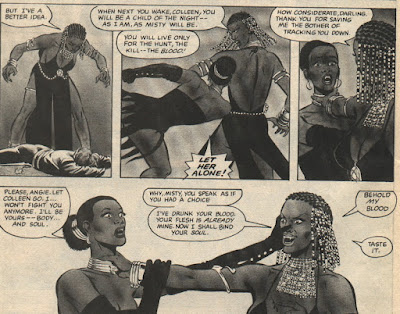 "I've drunk your blood. Your flesh is already mine. Now I shall bind your soul.
Behold my blood. Taste it."

Terrible dialogue like this reads like an SM-fetishist's idea of a Dracula movie. One wonders what Angie sounded like. Does she speak in a typical urban accent or maybe she's adopted a Bela Lugosi style Eastern European vampire accent: "I vant to zuck your blood!" Either way, it doesn't make the following scene any less gawdawful.

Ow lawd, without a doubt... The lesbian undertones are out and about. Having Angie force the trembling, slightly defiant Knight to reach for her bosom while assuring her it's hot and rich with life is just too much. It's smut for smut's sake so let's put an end to it. 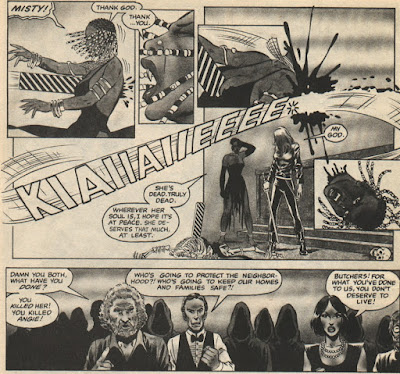 Thus endeth the saga of Angie, black lesbian vampire queen of the New York co-opt board. The kicker to the story? The local tennants are rather annoyed at the Daughters of the Dragon for killing Angie, after all she did keep the neighborhood safe. Who cares that safety required a human sacrifice every five years?

Chris Claremont's story is an odd one. If you look past the usual mind control/domination motifs this blog has covered for over 8 years now, you discover another layer to the tale. Angie's a lesbian,  evil and needs to die, even though she almost tempted and corrupted the protagonist with her sinful lifestyle.

That is reminiscent of the lesbian pulp novels from the 1950s which painted same sex love among women as a very alluring, but ultimately fatal alternative lifestyle. It usually saw a "real" lesbian lure an innocent, straight but impressionable young woman down the wrong path in books with horribly contrived titles like this... 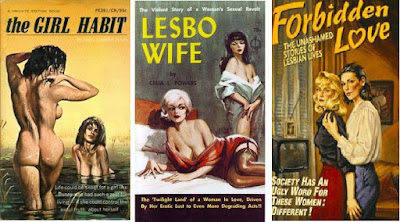 After very sordid and titillating descriptions of what two women can do in bed, the heteronormative reset button was invariably hit near the end of those novels. The tempted girl returned to her man and the deviant lesbian usually met a tragic, fatal fate.

That was the 50s and 60s, you'd have expected something a bit more open minded from Claremont by the 1980s. After all, as writer of the X-Men he was all about hammering home how we should be open and tolerant towards alternative lifestyles. Which a non-Code limited title like Bizarre Adventures would have been ideally suited for. Instead, he opted to go the easy sapphic slasher route. It also makes his piece de resistance of that year, the scathing Avengers Annual I#10 (in which Ms. Marvel blasts the Avengers for letting her get mind raped by Marcus Immortus), feel more than a tad hypocritical.

35+ years on, this tale reeks like stale garlic and still stings like a stake to the heart...


* Oh, as a bonus feature... A clip I absolutely love and tried to work into the story before I figured it also worked as a coda. Colleen had two night tables?

Posted by Clarmindcontrol at 9:43 PM

Lot of the dialogue is suspicously similar to Carmilla, if memory serves...intended compliment of the novel or phoning it in I'm not sure. (:

Hello, I log on to your blogs on a regular basis. Your writing style is witty, keep it up!
hp printer customer care number