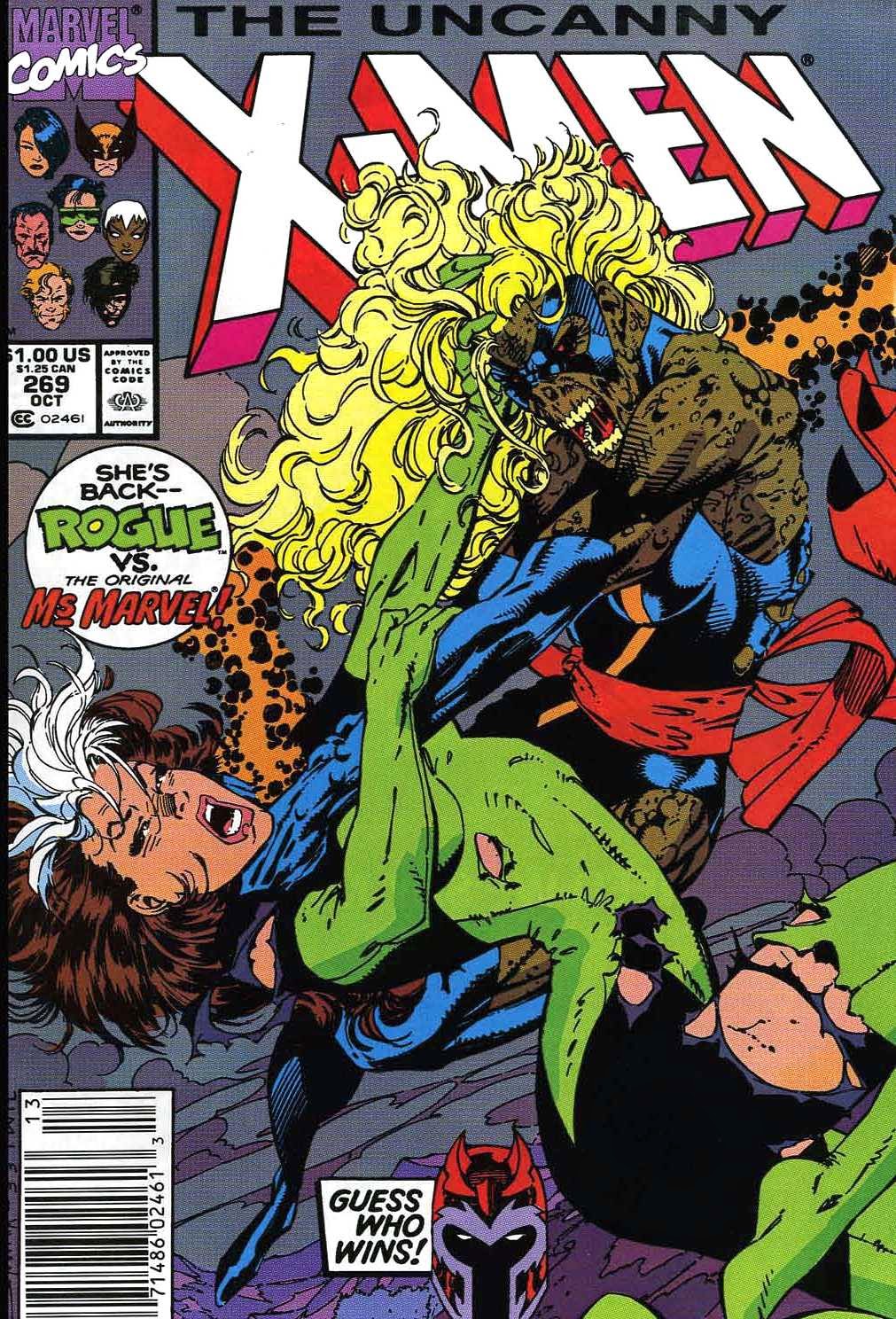 Now, strictly speaking, since Chris Claremont barely writes any new comics any more, every entry is potentially a throwback, despite the day it's published. But for now, let's roll with the meme, even if isn't Thursday. Today, we're covering the mess that is Uncanny X-Men I#269.

As regular readers of this all too infrequently updated blog already know, the events of this particular issue have already been kinda covered in this entry from late 08. Still, upon further examination, it turned out we barely scratched the surface of mind control weirdness. Let's start with the basics...

Uncanny X-Men I#269 tells the story of whatever happened to Rogue after she sacrificed herself dragging the lethal robot menace Master Mold through the Siege Perilous back in Uncanny X-Men I#247. The Siege is a mystical portal that leads to a conventiently undefined afterlife where higher powers examine who you were and use it as a basis for your next incarnation. It's like the John Lennon song Instant Karma without Yoko's backing vocals.

Master Mold would return years later as the mysterious, mutant hating Bastion but Rogue was the first one to come back... As, well, herself... So much for advancing along the karmic wheel. She was returned to her old room in the abandoned Australian outback town the X-Men had been using as a base when she went through the Siege. And the minute she returned, she was in for some bad news. 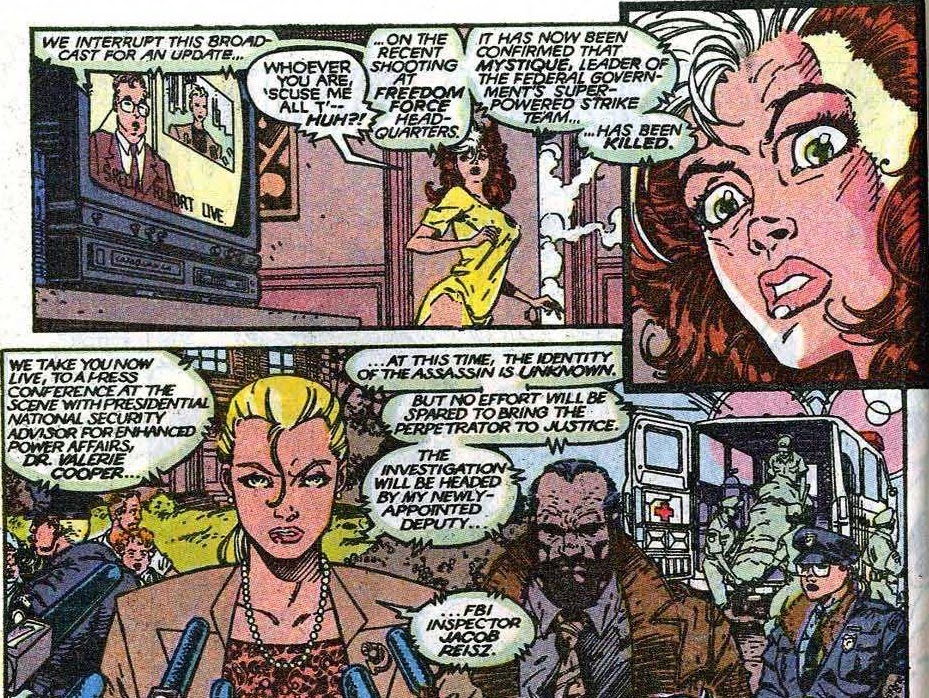 "It has now been confirmed that Mystique, leader of the federal government's
super-powered strike team... has been killed."

Talk about an ominous home coming... After learning her surrogate mother had been killed, not even noticing the dark, brooding figure of Jacob Reisz behind Val Cooper, Rogue rushed out to inform the  X-Men of Mystique's demise. But, much to her own surprise, she found the X-Men had long since been driven off by the town's former inhabitants: the Reavers. The cyborg mercenaries were ready to kill Rogue, regarding her as little more than the one who got away. But, she was rescued by the most unlikely of people... 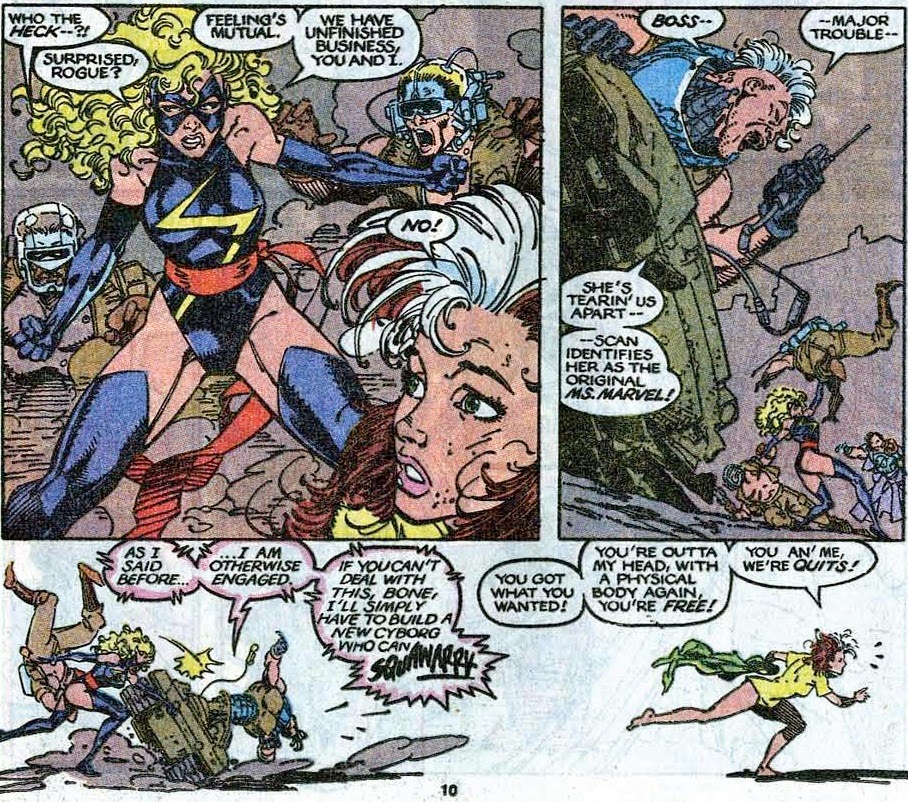 "Surprised, Rogue? Feeling's mutual. We have unfinished business, you and I."


I'll say... Not to mention unreal business. That's Carol Danvers, better known as Ms. Marvel... A woman whose powers, mind and memories Rogue infamously absorbed in between scenes of 1981's Avengers Annual I#10. The real Carol Danvers survived, though robbed of her personality, experiences and superhuman powers. Eventually, due to a supreme effort on Charles Xavier's part, she regained most of her mind and memories and the Brood would ultimately mess with her genetic structure to turn Carol into the white hole powered Binary.

So, in a sense, the one, true Carol Danvers was alive and well... Which left Rogue stuck with a copy of Carol in her mind. The two would often struggle and vy for control of Rogue's body, before she got herself sucked through the Siege Perilous. In the afterlife, Rogue and "Carol" were seperated, spewing both women back out as seperate individuals, because hey kids, comics.

"Carol" was ready to hand Rogue to a knuckle sandwich or two for having been trapped inside her head all those years and she didn't care if she had to punch a hole through the Reavers to do so. An added wrinkle: it seemed that Rogue no longer possessed Ms. Marvel's super strength and flight. All she had to rely on to keep her safe were her original mutant power and personality absorption abilities... Luckily she was able to think (and walk) on her feet: she headed for the teleporter Gateway sitting on the outskirts of town. 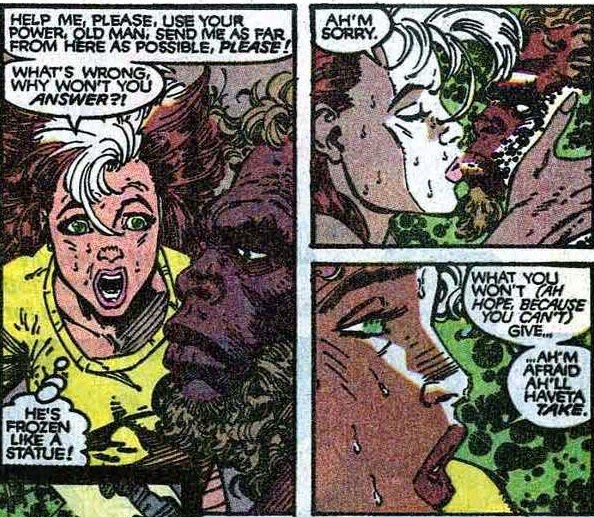 So, in order to escape from a furious victim of your mind control, you decide to... mind control somebody else? Well, that's one way to solve a problem and hey, it does give you one magnificent tan. 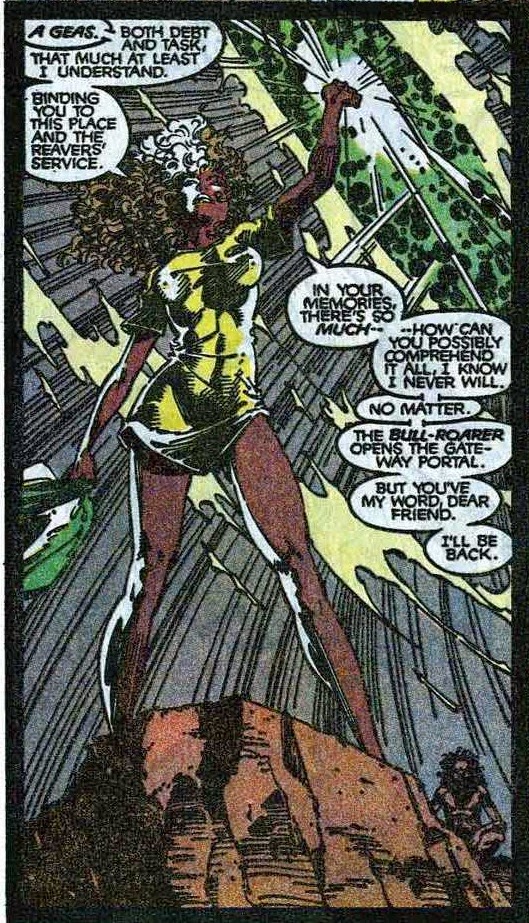 "The bull-roarer opens the gateway portal.
But you have my word, dear friend. I'll be back."


And with that, Rogue is gone moments before "Carol" can catch up. Rogue was able to teleport herself to the Savage Land where she was forced to fend for herself for an extended period of time. Without any powers other than her own, surviving in a dinosaur filled realm that time forgot, Rogue slowly regained her self confidence. But, whatever became of Carol? 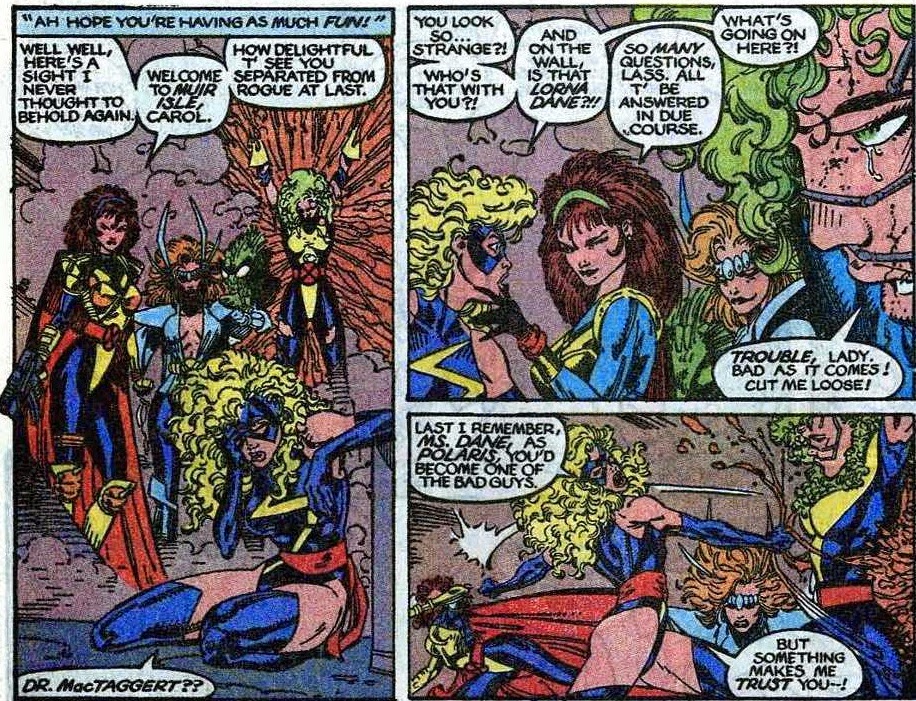 "Welcome to Muir Isle, Carol. How delightful t'see you seperated from Rogue at last."

... Without any explanation whatsoever, "Carol" finds herself on Muir Island where things aren't exactly as she remembers. Moira MacTaggert seems vicious and cold, the sorceress Amanda Sefton appears equally evil hearted and what's Polaris doing there strapped to a wall? All is soon made clear when "Carol" meets the villain to beat.

"Stop it, stop it... I just wanted to play with everybody's head!"

"Carol" quite correctly identifies the astral projection as being Charles Xavier's son David Haller... But, just like everybody else on Muir, the boy isn't himself. So, who's to blame for all these mind control shenanigans... Ow, you guessed it: the Shadow King. And he means business. So much so that he turns himself into a particularly penis nosed reptile to charm Ms. Marvel. 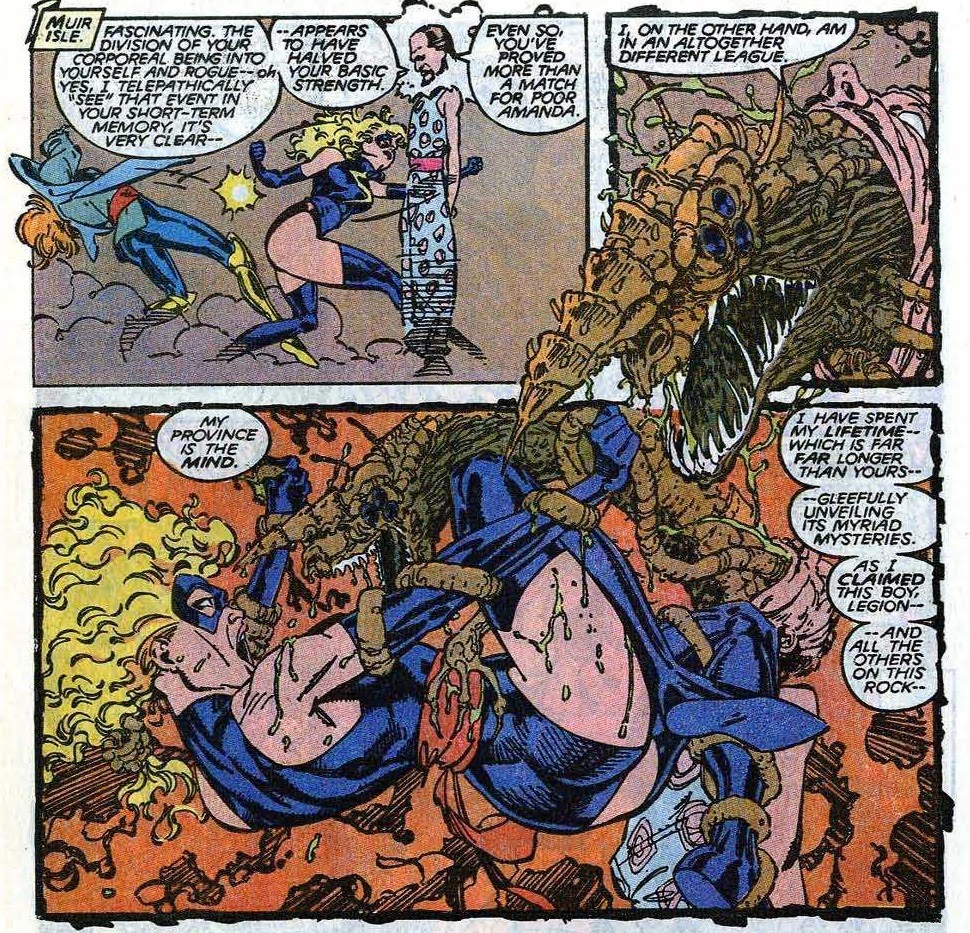 "My province is the mind. As I claimed this boy, Legion... and all the others on this rock..."


Oh, you can guess what happened next, right?

The Shadow King made sure Carol was his to control, mind, body and soul forever. But just how she arrived on Muir Isle was never touched on in the actual comics. Well, as it turns out, Chris Claremont had planned this particular issue to be but a minor chapter in a larger Shadow King centered storyline that should have run all through Uncanny X-Men I#300. Along the way, it would have been revealed the King didn't merely control Moira and the people on Muir, he was also in command of both the Reavers and Gateway. This would have explained the fact Carol popped up in Scotland... *and* the Savage Land, moments after her conversion. 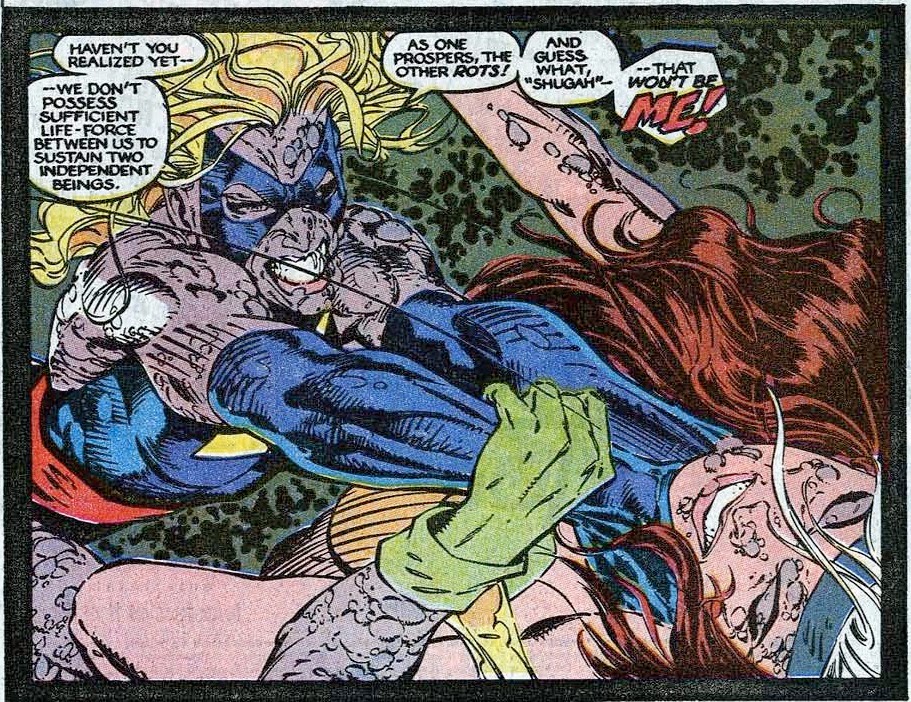 "We don't possess sufficient life-force between us to sustain two independent beings.
As one prospers, the other rots!"

Mind controlled by the Shadow King, "Carol" is determined to absorb Rogue's lifeforce in order to regain her full potential. All this in an attempt to be able to serve her new master even better. And as it turns out, even being near the monstrous Ms. Marvel's form infected Rogue with the Shadow King's deep, dark influences. 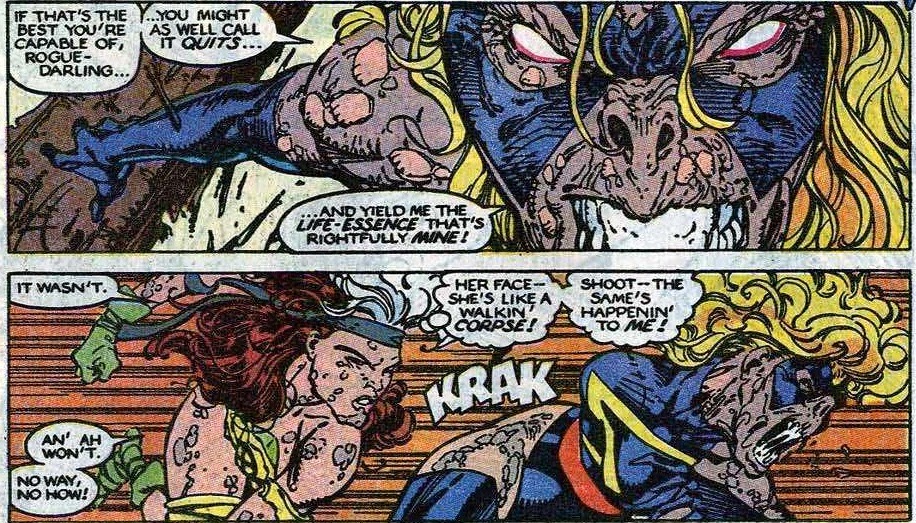 
And, just when things seemed at their bleakest, salvation was at hand from the most unlikeliest of sources... That is, if you didn't spot his helmeted cameo on the cover a little earlier. But first, let's indulge "Carol" in what would prove to be the final speech she'd ever deliver... 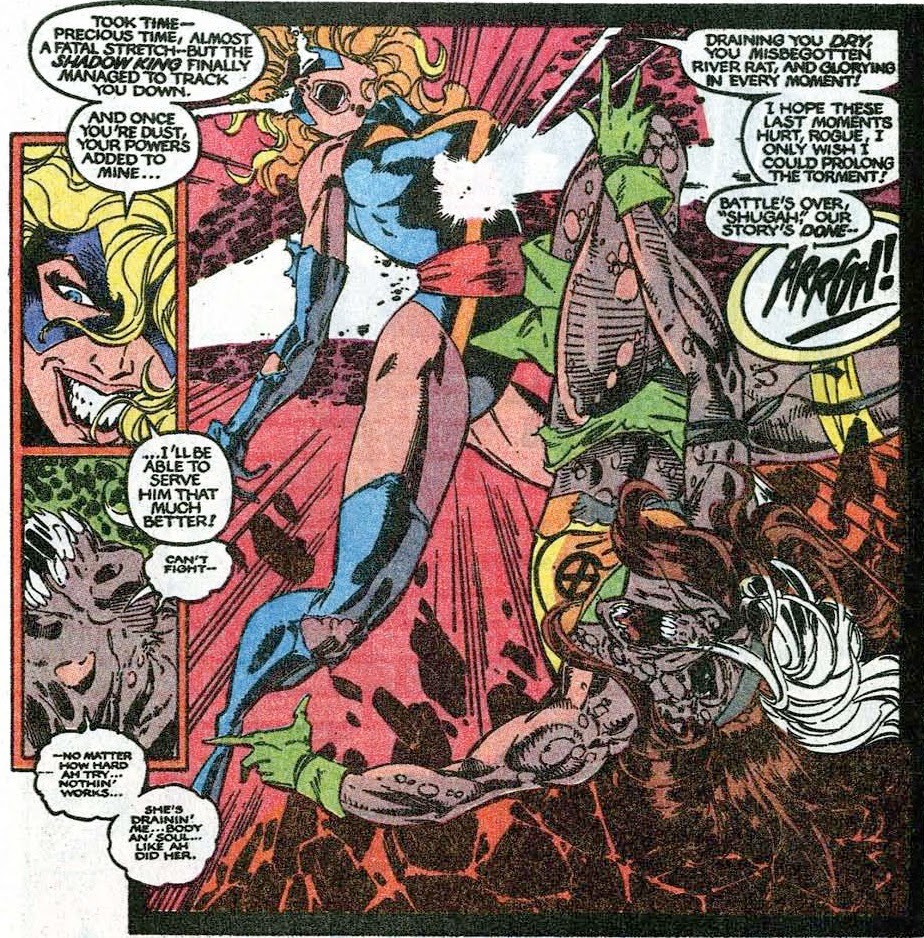 "The Shadow King finally managed to track you down. Once you're dust, your powers added to mine... I'll be able to serve him that much better!"

And with a well placed magnetic force blasts, a certain magnetic mutant decided to involve himself. He chose sides and made his presence known. 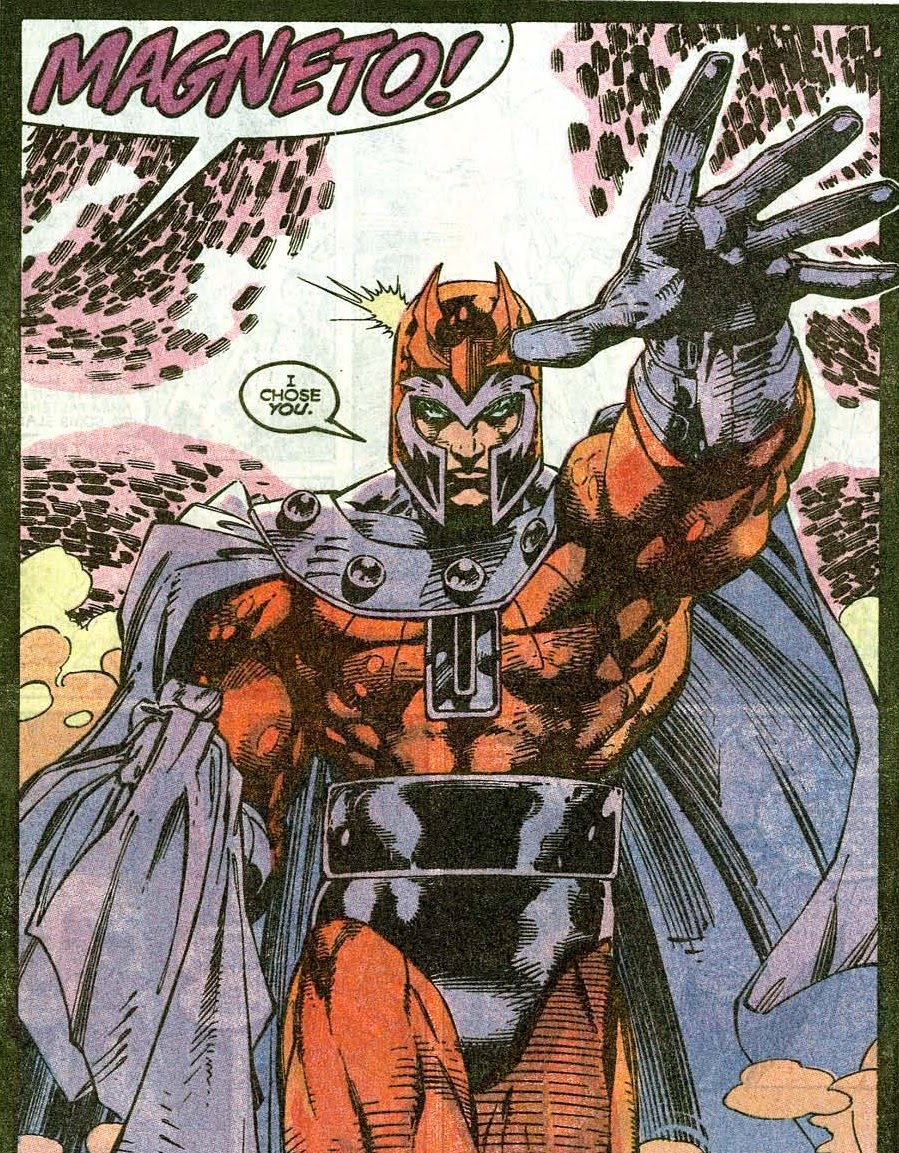 A good half a decade before the Pokemon craze, Magneto already coined that franchise' most popular catchphrase. With "Carol" dead, Rogue was safe, even though she was roped into fighting the magnetically powered Zaladane along with Magneto, Ka-Zar and SHIELD. After that adventure, she'd find herself on Muir Island only to end up mind controlled by the Shadow King after all in Uncanny X-Men I#278. 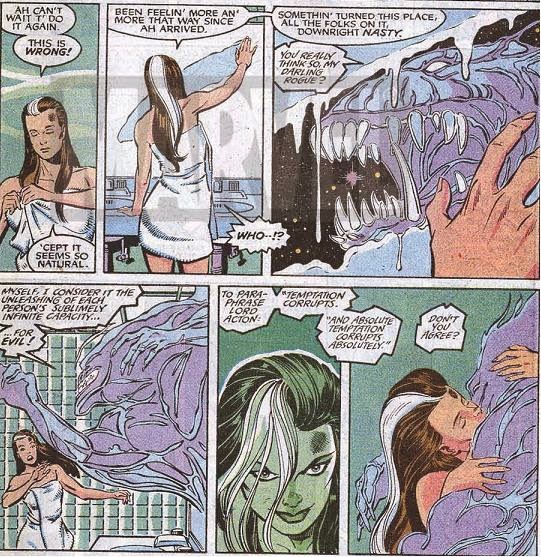 "This is wrong! 'Cept it seems so natural."

If only Rogue had told Magneto what she'd been going through, even before the final confrontation against "Carol" in the Savage Land. As it turns out in Uncanny X-Men I#275, the master of magnetism had his own run in with the evil entity.

"At last I confront the Shadow King. Followed by sick shame at the awful cost of my survival."


Knowing Claremont, he would undoubtedly have revealed the circumstances of Magneto's initial encounter with the King, leading up to the proposed climax in Uncanny X-Men I#300. This anniversary issue should be marked with the death of Charles Xavier and Magneto taking over for the professor full time.

Alas, Claremont more or less willingly left Uncanny X-Men with issue 279, already co-written by Fabian Nicieza and Jim Lee. So a lot of plot threads were left dangling, though Claremont confirmed the connection between the Reavers and the Shadow King in 2001's X-Treme X-Men Annual. It's also not unthinkable he meant to reveal a lot of Magneto's horrendous, evil deeds were indirectly caused by the Shadow King's lingering corruption, which would have made Magnus' intended status quo a lot easier to digest.

Maybe someday we'll know for sure...
Posted by Clarmindcontrol at 4:37 PM

I actually wondered if the "shame" comment was Claremont intending to reveal that the Shadow King was behind Magneto's redemption!?

Hi! If you go even more back in Ms. Marvel history you can check out Ms. Marvel #7 from year 1977. It's Chris Claremont's third issue and it shows classic villain Modok's attempts at brainwashing our heroine and turning her into his slave. Our beloved Chris was so young and yet mind control was already his favorite topic!

I have just found this website while searching over the internet, you have posted valuable information which i like reading.
hp printer customer care number