Its 2013 and sadly enough... Chris Claremont still isn't writing any new comics. Thankfully, his bibliography still contains plenty of mind control heavy gems we can revisit, so lets do the timewarp again.

The year is 2000 and Chris Claremont had just taken over the reigns of Uncanny X-men and X-men.As he got busy creating new, or rather Neo, storylines, he also didn't forget the works of those who came before him... Or after him, depending on your point of view. 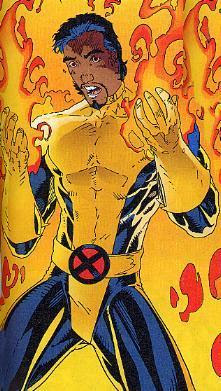 He would use, of all people, Stryfe in an Uncanny X-men annual and for the origin story of Neal Shaara, one of his newest creations, Claremont chose Bastion and his Prime Sentinels from 1997's Operation: Zero Tolerance crossover.

Readers were introduced to Neal out of the blue. Back when Claremont came on board, the X-offices decided to have all the books jump forward 6 months in time, so they could introduce all kinds of changes. One of them was Neal, who popped up as the X-men's latest Thunderbird. No connection to the late great John Proudstar, though. Neal was a young Indian man who suddenly found himself capable of generating and controlling white hot plasma.

X-men Unlimited # 27 finally gave Neal a backstory. Hailing from Calcutta, Shaara grew up relatively care free, enjoying the perks and affluent surroundings that accompanied being the son of the city's head of police. All of that changed when his journalist brother Sanjit disappeared while working on a story. Rather than trust his father's officers to do their job, Neal went out looking for Sanjit himself, initially unaware he was being shadowed by Karima Shapandar, Calcutta's best police detective.

It didn't take long for Neal to get into trouble, when he ran afoul of a local street gang and Karima had to step in to save his life. There was an instant attraction between the two of them, but romance didn't have much chance to blossom because when they finally found Sanjit, they also discovered trouble. And lots of it. 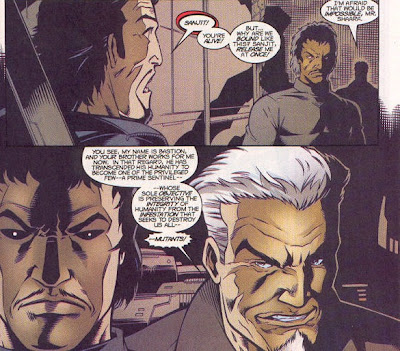 At the time, Bastion had been gathering Prime Sentinel candidates from across the globe and the reason for Sanjit's disappearance was a simple one: the younger Shaara brother had become an unwilling recruit of Operation: Zero Tolerance. That is, until his Prime Sentinel reprogramming was completed and he turned into a willing supporter of the cause... a fate Neal and Karima were about to share. 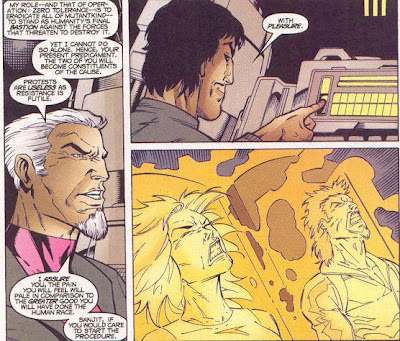 "Protests are useless as resistance is futile"

"Resistance is futile"? Really? This from the mouth of a cybernetic organism that isn't a Borg? Its a wonder the Star Trek people didn't sue for copyright infringement. Still, Sanjit flicked the switch, beginning the proces of transferance and revealing some interesting results. 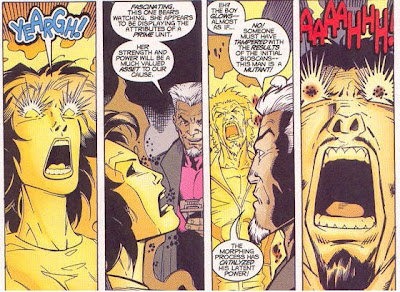 While Karima showed remarkable potential and was about to be turned into a top of the line Prime Sentinel, the proces also did a real number on Neal... Apparently being turned into a cyborg mutant hunter also kickstarts any latent mutant genes one might have. His plasma powers emerged out of control, destroying the Prime Sentinel lab.

During the ensuing chaos, Sanjit managed to temporarily beat his Prime Sentinel programming and aided Neal. This defiance cost him his life, but it did allow Neal to escape with Karima... Who suffered from a bit of a problem... 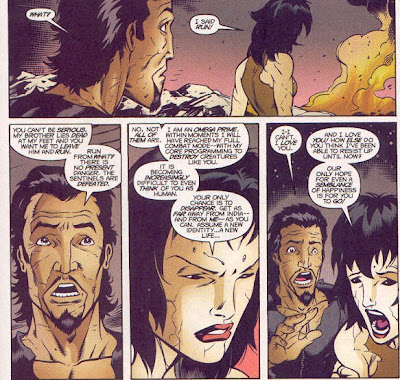 Her reprogramming had already crossed the point of no return. In her last moments as a free human being, Karima struggled to keep the Prime Sentinel programming to fully take hold of her mind. She urged Neal to flee from her, before she completely succumbed to the digital mind control and would be forced to fight and kill the man she loved. Powerful stuff. 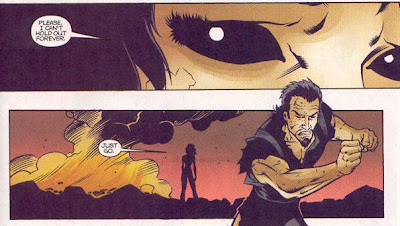 And go he did, running off to become part of the 2000-2001 X-men team before being relegated to the X-treme X-men for close to 50 issues and finally getting turned into a background character before disappearing into obscurity altogether... Although he might one day pop up again, considering he actually was one of the 198 mutants to retain their powers after 2005's M-Day event.

Karima, however, would grow to be a Claremont favorite of sorts, briefly featuring in his 2004 return to Uncanny X-men and even getting a starring role in Claremont's short-lived Excalibur series that saw her joining forces with Charles Xavier and Magneto on Genosha.

Guess not resisting mind control has its perks after all...

Posted by Clarmindcontrol at 12:11 AM