For instance, to fully explain the plot to 1976's Daredevil Annual # 4, it would take at least two or more additional chapters, not counting about the utter randomness required to make this cover possible. 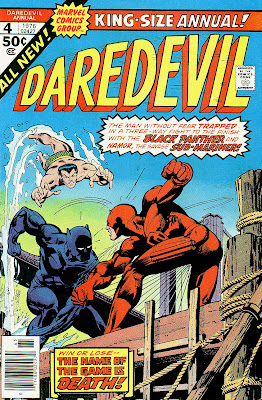 First things first... Namor the Sub-Mariner doesn't break up any fight between Daredevil and the Black Panther. In fact, he only appears because Daredevil overreacts and believes Namor is the bad guy.

Well, the annual opened with Robert Trevanian Mallory, a wealthy inventor/industrialist who was pitching a business deal to the Black Panther. Mallory has designed a 'tidal power station' that taps the 'vast energies contained in the deep ocean currents'. But he needed some Wakandan vibranium to actually build the thing. Unfortunately, right in the middle of closing the deal, the phone rings.

And here's where things got a bit wobbly. The story continues with Daredevil patrolling the city and spotting a crashed police car. As he investigates the scene, he discovers a wounded cop who rather eagerly tells him about Mallory and the apparent involvement of the Sub-Mariner. This prompts DD to search out Namor... And when he finds the prince of the realm, he manages to kill about half a dozen pages with a fight scene that leaves him injured and none the wiser. 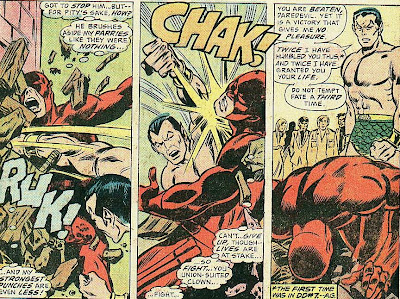 Black Panther, however, decided to take an active part in finding Mallory's son Keith. After hours of tracking, T'Challa confronted the true culprit: small time criminal Ruffio Costa. Despite his polite demands that the child be released, Ruffio actually manages to take the Panther hostage as well... by pointing a gun at the man with jungle cat like reflexes.

Not too long afterwards, Daredevil received a call as his civilian alter ego, attorney Matt Murdock. Ruffio demanded 5 million dollars ransome money from the Avengers for the Panther's release. Changing back into his Daredevil duds, DD pays a quick visit to Murdock's law partner Foggy Nelson who happens to have that kind of money lying around. 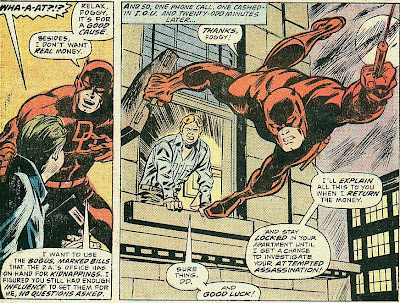 On his way to get the money to the crook, Daredevil bumps into Namor again who is still frustrated about... well, everything... And decides to use DD as a stress relieving punching bag for a while longer, almost ruining the entire rescue plan when he tossed both Daredevil and his suitcase full of money into the water.

Retrieving it just in time, Daredevil fights Namor some more until he finally gets billy clubbed with some common sense. 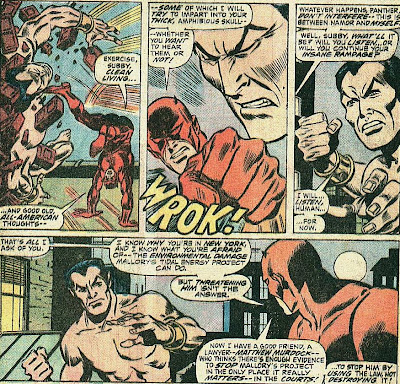 Finally listening to reason, Namor backs off... although offering his strength to help solve the case would have been far more appreciated. Not that it seemed necessary, this Ruffio character seemed little more than a small time crook and indeed, was easily defeated by both the Panther and Daredevil when he got caught in the blastwave of some exploding machinery.

All's well that ends well, I suppose. No way there could still be anything mind control related going on, right? 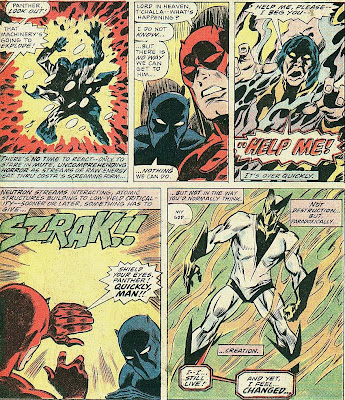 Wait for it, waaaaaait for it... 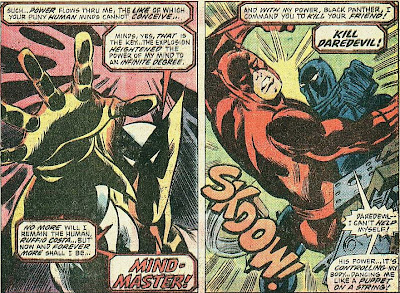 Ahhh, that's the ticket! Chris, you tease, 29 pages in but you finally delivered. A classic hero versus hero mind control heavy fight in the closing moments of a rather disappoint annual so far. Lets have a little taste of those sweet, sweet cliches... 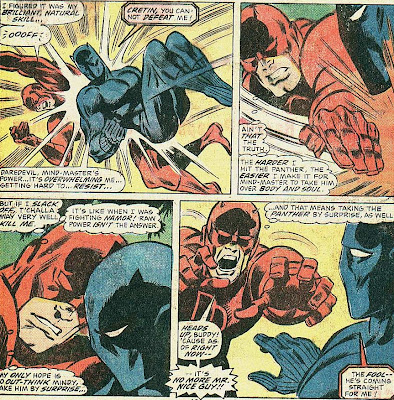 "The harder I hit the Panther, the easier I make it for Mind-Master to take him over body and soul."

That's got to be one of the earliest uses of what soon would become one of his favorite chestnuts, the taking over and controlling of someone, body and soul... And heck, the Panther's already used to wearing black leather, so its a natural fit.

Meanwhile, the fight is going poorly for Daredevil whose radar sense is being disrupted by the residual energies from Mind-Master's powerblasts. That's why he doesn't 'see' this coming... 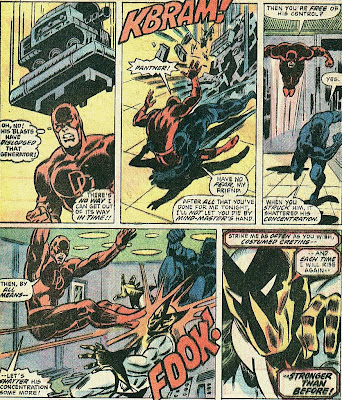 Apparently, that's the appropriate sound effect when hitting someone in the face while slinging from the ceiling. Who said comics couldn't be both fun ánd highly educational?

Panther only managed to break free because Mind-Master's concentration was broken but both heroes were still... FOOK-ed... because their best blows didn't seem to harm the bad guy. That's when Daredevil decides to do something really daring and goad the villain into pouring on the power, pushing himself to the limits... And gets killed for his efforts. All according to plan. 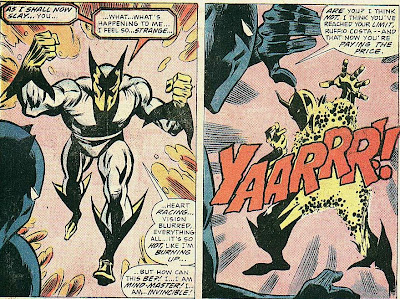 Right before he can kill the Panther too, Mind-Master runs out of juice and reverts back to his human form who the Panther easily knocks out spouting some lines that are just a little too precious... 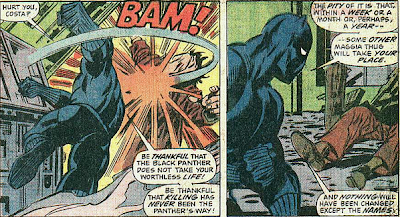 ... Ehm, T'Challa? Its a pretty safe bet the 'other maffia thug'  that will take Costa's place isn't a mind controlling super villain in his spare time. Also: killing's never been the Panther's way? I'm no expert on Wakandan tribal customs, but I'm guessing that chieftains who outright refuse to kill, not even to defend their people, soon find themselves out of a job. Or a people.

Anyhoo, lets wrap this headache of an annual up... 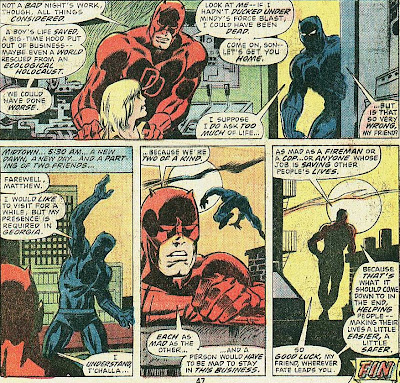 Posted by Clarmindcontrol at 7:07 AM

The best thing about reading these 40 years later is looking at the science. I mean, IMAGINE if there were a way we could harness the power of the tide. Oh wait. Iceland basically gets all of their power from tides. And they didn't need Vibranium to do it. And they don't create an ecological disaster. Because, as we all knew in 1976, using waves would CAUSE ecological disaster - we should just keep using coal instead! Good times.