The previous three posts covered the second part of the so called Asgardian Wars. This entry is a prequel of sorts, covering the events that led up to Loki's grudge match between the X-men.
... Doing a prequel after the actual three part saga? Hey, if George Lucas can get away with it...

It all started, as so many things in the Marvel universe tend to do, because of Loki, Asgardian god of mischief.

In order to increase his own power and influence, Loki had to do one good deed for the people of Midgard, better known as Earth. Never one for modesty, Loki decided his small act of kindness would be to bring peace to the Earth. Let the meddling begin! 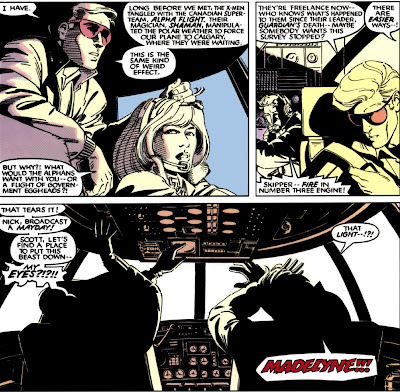 Cyclops and his new wife Madelyne Prior were piloting a plane carrying a group of government dignitaries, when all of a sudden they were attacked over Canada by what seemed to Shaman from Canada's premiere superhero team Alpha Flight.

The plane went down, but fortunately their plight didn't go unnoticed, thanks to Rachel Summers... Cyclops' telepathic daughter from an alternate future. Despite the distance, Rachel felt her father's predicament and freaked out, forcing professor Xavier to mentally take over and calm her down. 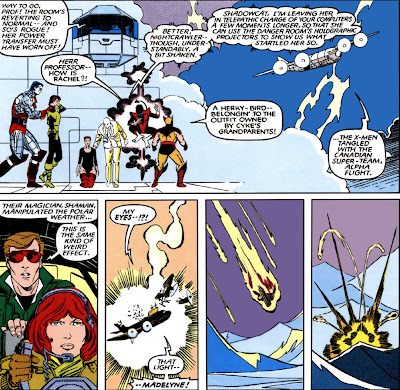 He even used her mind to power the holographic display screens in the Danger Room, so the entire team could see what was upsetting Rachel. Leaving aside the sheer improbability of such a move, wouldn't it have been a whole lot easier for the world's most powerful telepath to simply share the required memores with all the X-men?

By now, the team was convinced Alpha Flight was behind the disappearance of Cyclops... so, they quickly made their way up north to confront Shaman. Fortunately for him, many of his Alpha Flight teammmates were on hand to help him defend himself.

Not that they were much good against a pissed off Rachel Summers, who barged into Shaman's practice sporting her red leg warmers of doom... 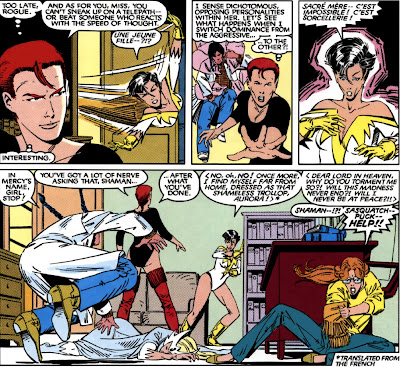 Using her telepathy, Rachel played with Aurora's multiple personality disorder... causing the flirty superheroine to lose control of her body to Jeanne-Marie, her pathologically religious, prim and proper other half. A pretty neat, if not cruel trick. Lets see how Xavier feels about it. 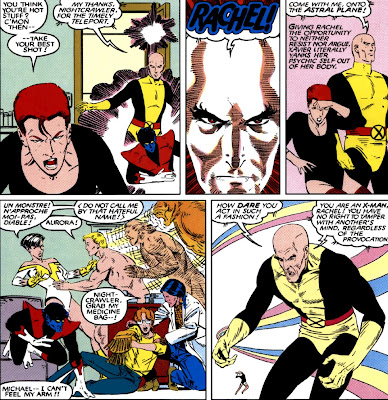 Yes, I guess its safe to say Charles wasn't pleased... but he ironically uses his powers to violate Rachel in the same way as she had with Aurora: by forcibly controlling her mind. Talk about being your typical holier than thou do as I say, not as I do kind of teacher...

"I will not tolerate such behavior, young lady. Ever again."
After having been properly chastised, Rachel helps Xavier undo most of the damage she caused. The two teams figure out Shaman wasn't actually involved in the attack on Cyclops. But who was, and better yet: where is Cyclops?

Once there, the X-men discover Cyclops is fine...better than fine even. They didn't really crash, but were brought down by the sudden eruption of the fire fountain... a source of magical energy that turned all the human passengers into super powered beings.

Madelyne Pryor gained a strong healing power and started calling herself Anodyne, an ancient Greek word for analgesic. But she could do far more than just dull pain. She fixed the brain damage Scott suffered as a child, that prevented him from controlling his optic blasts...  And she was ready to help the X-men and Alpha Flight too. 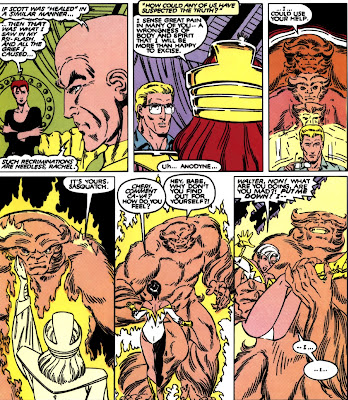 Sasquatch wanted Anodyne's help to control the inexplicable bouts of mindless rage he'd been suffering from back in his own book. That rage eventually turned out to be the resurfacing personality of the Great Beast Tanaraq, whose form Walter Langkowski unknowingly inhabited whenever he turned into Sasquatch. But never mind all that, Anodyne simply used her healing flame to restore Langkowski's sanity.

And he wasn't the only one... Overjoyed, Sasquatch grabbed his girlfriend Aurora while still covered in Anodyne's flames which caused their healing effects to spill over to her. The Aurora and Jeanne-Marie parts of her personality were merged, essentially curing her multiple personality disorder. Thanks to Anodyne, Aurora could finally control her own mind.

Yes, its safe to say the Fire Fountain could potentially solve all of mankind's problems, eliminate war, disease and famine... Basicallycreate peace on Earth. But, at what price? The Fire Fountain was deadly to all creatures of magic, causing violent illness in Snowbird.

She ran off, with Wolverine and two of the recently mutated humans in pursuit. Unfortunately, they couldn't find her... and Wolverine came back empty handed, tired and ready for a nap. And then... this happened: 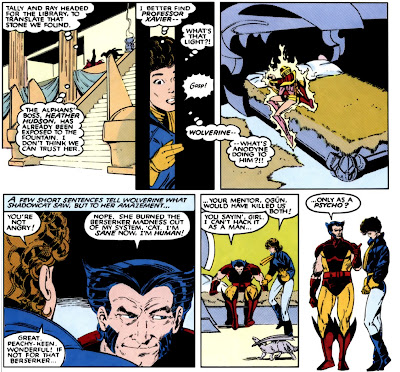 Well, no, you still have your claws so techninally speaking you can hack it any time you want, really...

Its interesting how Claremont writes the following scenes. Madelyne Pryor cured Wolverine's berserker rage... But, 'curing' someone, essentially by lobotomising them, without their prior permission isn't just unethical, its as close as one gets to being (mentally) violated. Yet, Wolverine isn't mad at her at all...

Might be an after effect of Anodyne's powers, might be cos he was more worried about his sudden case of mismatched sideburns. 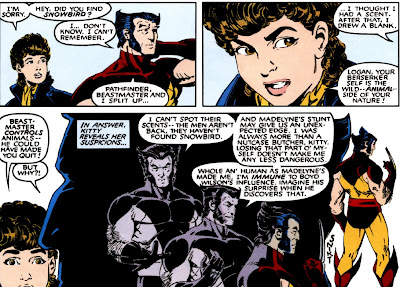 The whole reason for Kitty walking in on Wolverine was to share what she had discovered some disturbing facts about the Fire Fountain. For one thing: the fountain burned away the human capacity for creativity and fantasy.

Even worse: the fountain is expanding and will soon affect the entire planet... And ow yeah, Kitty went exploring underneath the base of the fountain and discovered the ancient ruins of a Norse village whose inhabitants worshipped... wait for it... Loki. 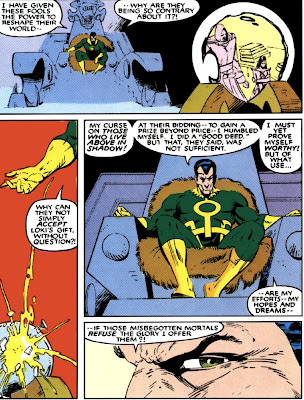 Watching his little experiment in generosity go awry, Loki decides to take matters into his own hands. He shows up in person, along with some giants for good measure, to knock some sense into the X-men and Alphans... in hopes they will see just how kind and giving he really is. It doesn't go over well... 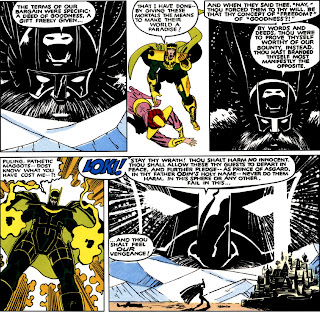 His attempt at humility a distinct failure, Loki gleefully takes back all his gifts... the humans lose their powers and all of Anodyne's patients are once again suffering from their old ailments. Loki departs, but the scene has been set for the actual Asgardian Wars to commence here, here and here.

Forsooth and yea verily...
Posted by Clarmindcontrol at 7:53 AM