Controlling Cerebellums at the Comic Con!

Its been said that writing a story, any story, pretty much boils down to choosing from a limited amount of plotpoints and then recycling them. The scenarios and conflicts you can subject your characters to aren't infinite, but when your name is Chris Claremont you do learn to improvise when it comes old storyideas. Take his tale from Fantastic Four # 22-23 for instance. Former FF-member She-Hulk gets ambushed by her archnemesis Titania and her husband the Absorbing Man.

Now, the She-Hulk-Titania conflict goes back to the first Secret Wars. On Battleworld, it was Shulkie who handed the brass and overconfident Titania her first defeat and she's been looking for payback ever since. But not this time around, the pair has been hired by an unknown mastermind to slip the She-Hulk a mysterious drink that turns her evil. Pretty soon, She-Hulk joined Titania and Absorbing Man in trashing New York City, that is... until The Thing shows up to take care of business... Only to get tricked into... Well, you can read, right? 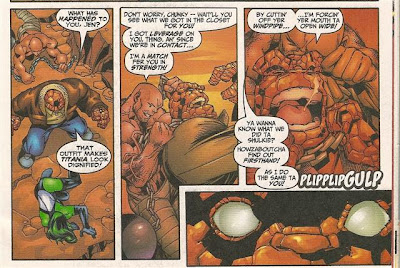 Yup... That's two FF-members mindcontrolled by a simple drink. So, before the issue is over the Invisible Woman knocks both Ben and Jennifer out and kicks Absorbing Man and Titania into the nearest jail cell. That still doesn't solve the problem though: what has them acting so weirdly? Leave it to Claremont's new favourite character Valeria Richards to come up with the answer to that: both Thing and She-Hulk are swarming with microscopic nannites that inhibit their free will, apparently that drink they took was laced with them. By following the energy patterns used to command the nannites, the FF track the main baddie to... The San Diego Comic Con? 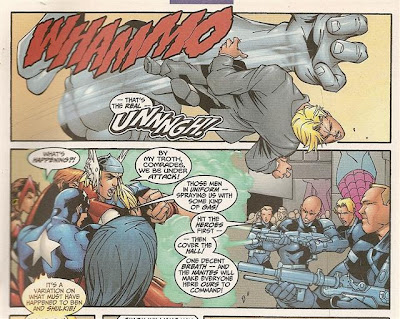 This revelation neatly sets up issue 23, "Chaos At The Comic Con!" A fine old busy mess gueststarring the Avengers who happen to be present at the Con. The unsuspecting team gets doused with the same nannites, now operating in easy to employ gas form! By now, Reed Richards has come up with a defence against the nannites' influence so the FF is immune to the gas. So, not surprisingly, the Fantastic Four duke it out with some of Earth's mightiest mind controlled heroes for a few pages while Reed devises a way to disable the nannites once and for all and then... we're pretty much on the last page of the issue. Think we got it all wrapped up, right? Ok, well, next issue the universe is coming to an end, and... Ow, wait, what's that? Who was BEHIND the nannites... Whoops, silly me, almost forgot! Take a look... 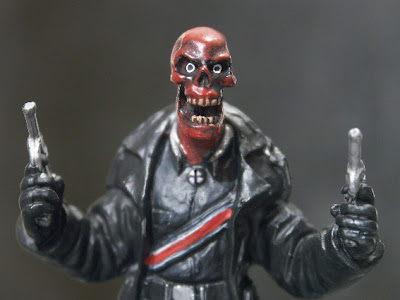 Well, wouldja believe it, the Red Skull of all people... He had recently 'acquired' the SHIELD Helicarrier after a storyline in (a coincidence, I'm sure) Uncanny X-men. Now the Skull was just hanging around, toying with the various lethal weapons one tends to have on board a flying battlefortress like the Helicarrier. So, that was basically it: two issues of mind control, fighting, a guestshot of the Avengers and even a cameo by Claremont and Larocca themselves... Only to have the Red Skull pop in for a panel or two to take the credit and cackle the equivalent of "Owww, me so evil, me so bad... bye bye now!" Weird. Just. Weird.
Posted by Clarmindcontrol at 7:50 PM