If there's a single villain Chris Claremont created that served his penchant for mind control during his tenure as writer on Uncanny X-men, it has to be him.

Who is the King? A malevolent psychic entity with no physical form who delights in causing pain, trouble and mental suffering. His main foe is Charles Xavier, who he met many years ago when the Shadow King inhabited the form of Egyptian telepath Amahl Farouk. Check out this page from Uncanny X-men # 117.
A young Charles meets Amahl in Cairo and senses his innate evil. 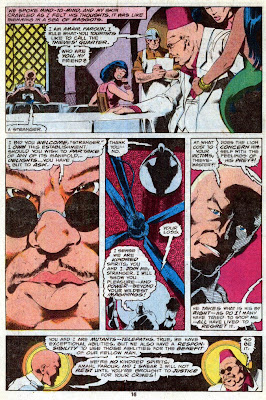 Charles and the Shadow King fight, the villain wants to destroy Xavier's mind and leave him an empty shell, ready to be corrupted by the King's evil presence. This is basically his entire shtick. But Shadow King severly underestimated Xavier's mental powers.

Charles defeated Fahrouk, which forced the King to flee the Egyptian's body, basically condemning the entity to a life on the astral plane. This ensured the Shadow King's vendetta with Charles Xavier.

Yet, for the longest time (Uncanny X-men 117 was released in the late 70s) the villainy of the King wasn't much more than just another part of Xavier's origin... Just like Charles had been buddies with Magneto or had his legs crushed by the villain Lucifer... That was, until New Mutants came along and the King resurfaced again. 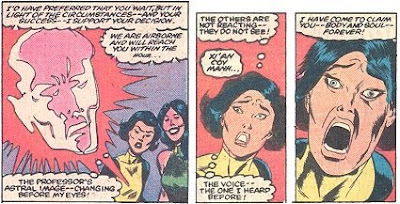 Xi'an had every right to be frightened. After a fight against Viper and the Silver Samurai she had mysteriously disappeared . She'd presumedly died in a big explosion only to resurface months later... Not quite herself... Well, lets just say there was more of her to love. 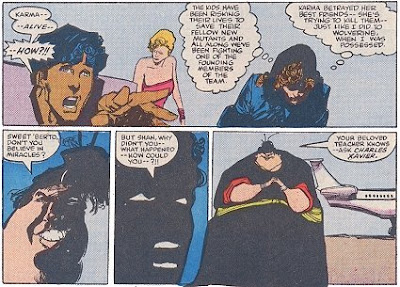 Yes, this is Karma, friends... The Shadow King had taken control of her mind, still in his 'Amahl Farouk' persona. Using Karma, the King finally had an outlet for his physical urges again. He liked to indulge himself with food and drink, causing Karma to become hugely obese (as Farouk had been). But don't be afraid, good always triumphs over evil in the end. No matter how obese...

Begone fattie, be goooooone... Ah, if only actual weight loss was that easy. Still, this wasn't the last time Amahl 'Shadow King' Farouk would plague the team. 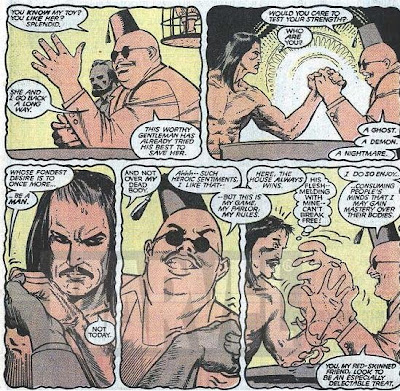 A couple of years later, Shadow King was back. This time, the X-men had disbanded and the mutant inventor Forge was trying to locate the team. On the astral plane, he came face to face with the King (again posing as Farouk).

Forge had to fight for his very life, because the King planned to consume his mind and take over Forge's body... All in an attempt to once again gain entry to the physical world. Forge managed to beat off the Shadow King, but in the end the entity accessed our world through the corpse of one detective Reisz.

In that guise, he would plot one of most audacious (mind control) gambits yet. More on that next time!
Posted by Clarmindcontrol at 10:22 PM