Mindcontrol is not a thing of the past

Now, for the past few months I've been making fun of Chris Claremont's past efforts in the field of comics. Of course, it might appear I'm just picking on a side of his writing that's long since a thing of the past. Well... just to prove that Chris still can't resist a good mind control plot, I give you this scene from Big Hero 6 issue 3, released last week. 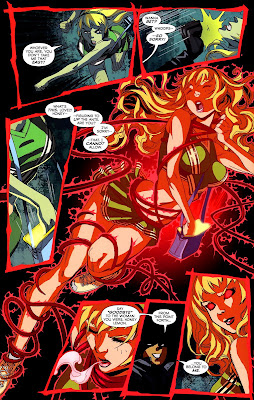 Honey Lemon, the woman with the magic purse, gets attacked by a mysterious villain with a mind controlling whip... And before you can say 'plotdevice done to death and beyond'... Honey Lemon belongs to the bad side.

Back to some older comics?
Posted by Clarmindcontrol at 9:29 PM