The Karma Conundrum part IV: Pay No Attention To The Fez In The Corner

In the fourth part of the Karma Conundrum, we finally reveal what's wrong with Xi'an Coy Manh. The cheerful, innocent former New Mutant turned into the bloated big brain of an evil operation, controlling countless minds as she pleased... Including those of her old teammates ánd Storm, who Karma seemed to have a particular interest in. 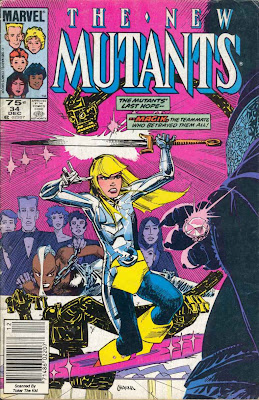 Only Warlock and Magik were able to escape her grasp... But there was a rather specific reason for that. Warlock's techno organic nature made him immune to Karma's possession, but Magik still teleported him to Limbo 'for safety reasons'. With him out of the way, she struck a deal of sorts with Karma, agreeing to be partners. To prove she was trustworthy, Magik delivered both Storm ánd Dani Moonstar into Karma's mind controlling hands.

Let's see how Warlock responded to this once Magik returned to Limbo in # 34... 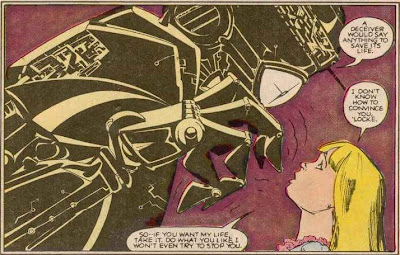 No dear readers, Illyana didn't just get mind controlled by Warlock's rather piercing eyes. But her sincerity worked... Warlock refrained from killing her outright, instead he joined Magik in observing what Karma was up to with Storm and the New Mutants in club Pharaoh...

Courtesy of Illyana's scrying pool, we get these scenes...

"Shall we find someone to play with, Ororo? A body to humiliate, a soul to savage?"

Storm desperately fought Karma's all too present mind control, threatening to break free on several occasions... But Karma always proved to be the stronger presence. A fact she liked to remind Ororo of by forcing to humiliate herself outright. 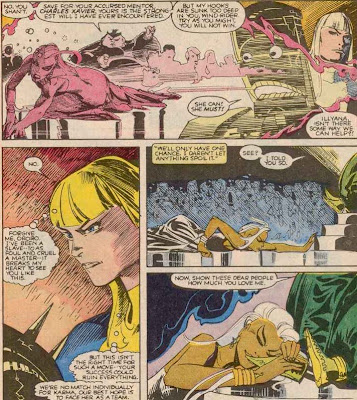 "My hooks are sunk too deep in you, windrider. Try as you might, you will not win.
See? I told you so.
Now, show these dear people how much you love me.

Nothing like a little foot fetish to compliment the already intense domination/groveling theme going on here. But Karma wasn't simply out to humiliate her and the New Mutants. If all the world's a stage, she wants everyone to be her puppets. As she reveals how her presence at the Paraoh nightclub will actually increase the number of people she will get to toy with...

"I infect them with a taint they'll never be rid of. A corruption that will grow and grow until it rots their souls! Tee-hee-hee!"

Sheesh, and you thought the cover charge and a 4 drink minimum were a crime. Still, Karma had considerable trouble infecting all the customers to Pharaoh, which was known as the most wicked olace in all of Cairo. Y'see, Storm's exceptionally strongwilled and Karma has to fight to keep her in check. And that's simply no fun, so she decides to do this... 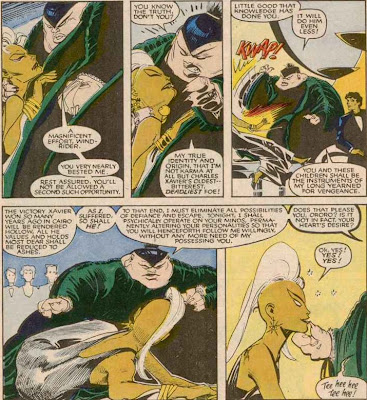 "Tonight, I shall psychically operate on your minds, permanently altering your personalities so that you will henceforth follow me willingly, without any more need of my possessing you. Does that please you, Ororo? Is it not, in fact, your heart's desire!"

So, Karma will use mind control to eliminate the need for mind control? Talk about making sense. But wait, did I say Karma? She jut said she's actually Charles Xavier's oldest, bitterest and deadliest foe. Man, quite the disguise... Guess Magneto's mastered more than just magnetism.

Actually, it's not Magneto... It's Amahl Farouk, from way back in Uncanny X-men # 117. A fact Illyana and Warlock discover when Illyana teleports them about twenty years into the past and they retroactively become part of that Uncanny X-men issue. They watch as Charles Xavier meets future X-man Storm as a child and celebrates at a local cafe by thinking a man to death. Hey, in Charles' defence, Farouk wás wearing a fez. 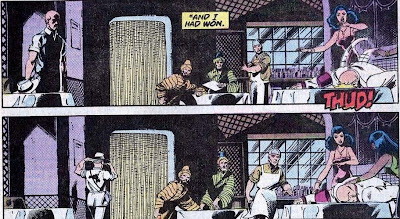 And this is Steve Leialoha's reinterpretation in New Mutants # 34. 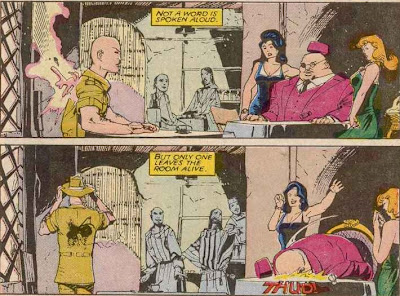 You'll note significant differences between the two. The cafe is totally different and Fahrouk's lady friends actually react relieved instead of shocked at his demise. Which might mean Illyana inadvertently teleported into an alternate reality... Or maybe Leialoha didn't have Uncanny X-men # 117 available for reference.

Either way, I'll lay-a-lowa on that one... Until the fifth and final part of the Karma Conundrum: The Big Blubbery Brain Breacher's Bee-zare Bye Bye

Posted by Clarmindcontrol at 2:20 PM