The Karma Conundrum part I: Xi'Ain't Coy About Mind Control... 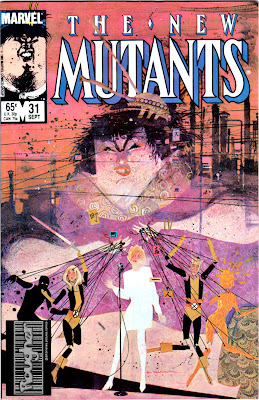 Every comic book writer has a signature storyline that defines their run on a title. The Masters of Evil invading Avengers mansion was probably the hallmark of Roger Stern's Avengers. Frank Miller's greatest Daredevil tale is arguably 1986's Born Again... and when it comes to New Mutants, Chris Claremont had the Karma Conundrum, better known as  # 29 - 34.

And, this being a Claremont comic, it involved a truckload of mind control.

For those of you not in the know... 'Karma' was actually the former Vietnamese boat refugee Xi'an Coy Manh... An original Claremont creation first appearing in 1980's Marvel Team Up # 100 in which she used her mind control powers to keep both Spider-Man and the Fantastic Four at bay. At the end of that particular issue, she was relegated to Charles Xavier where this initially one-off character became a charter member of the New Mutants.

But Karma wasn't exactly a mainstay of the team... Back in New Mutants # 6, right in the middle of the New Mutants' fight against Viper and the Silver Samurai, she was shocked and surprised when professor Xavier's mental manifestation changed into something intent on consuming her. 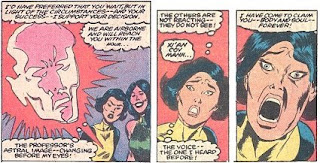 And so it did... Possessed, Karma seemingly perished when she dropped into the ocean along with most of Viper's cliffside headquarters. The team searched for several days, but in the end professor Xavier declared Xi'an dead and ordered the team home. That was # 6, and close to two years no one gave Karma a second thought... until New Mutants # 29 hit the stands. 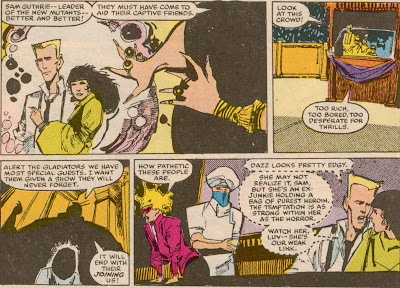 "Alert the Gladiators. We have most special guests. I want them given a show they will never forget. It will end with their joining us!"

Confused yet? Don't be... the Gladiators mentioned by the shadowy figure, are a band of super powered (mutant)creatures who make a living competing against one another in bloodsport type arena combat. Dazzler and Henry 'the Beast' McCoy first encountered this modern day 'blood and circuses' enterprise back the Beauty & The Beast miniseries. But the arena had obvious ties with the Hellfire Club, as this scene from New Mutants # 28 proves... 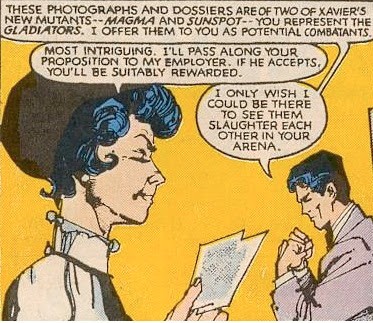 "I only wish I could be there to see them slaughter each other in your arena."

Here we have disgraced Hellion Empath messing with the New Mutants by bringing both Sunspot and Magma to the attention of the Arena. When professor Xavier was over on Muir Island dealing with his son Legion, Roberto and Amara were kidnapped by Arena henchmen... This had the remaining New Mutants all up in arms in # 29, with a little help from Dazzler.

Unfortunately for continuity, Secret Wars II literally broke in when Magneto lifted the dome off the arena and gathered the New Mutants so they could appear in the crossover to fight the Beyonder. Sunspot and Magma were blackmailed to stay behind, which gave the others something to do once their obligatory crossover involvement was done.

The unlikely team of Cannonball, Dazzler, Kitty Pryde, Magik and Rachel Grey were off to rescue them. Now what does all this have to do with a deceased New Mutant? Well, the Arena was run by a man called Alexander Flynn who claimed he was Doctor Doom's bastard son. But he wasn't exactly in charge any more, as Kitty Pryde found out when she was mind controlled, stuffed inside a giant medieval killer robot (yes, I know) and forced to fight the New Mutants in the arena... 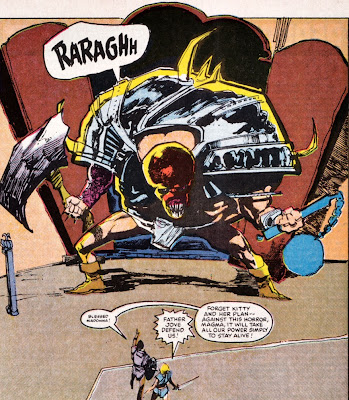 God, you gotta love comics from the days of the Comics Code Authority... An institution that insisted giant red skulled killer robot savages had to cover their genitals, so put him in a metal loincloth already... 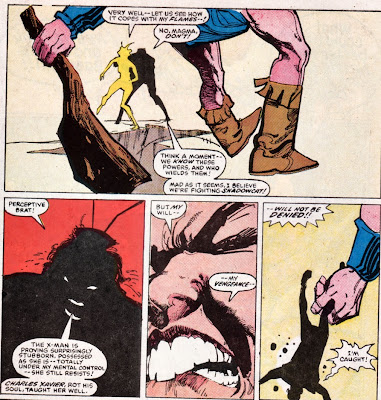 "The X-man is proving surprisingly stubborn... possessed as she is... totally under my mental control... she still resists! Charles Xavier, rot his soul, taught her well."

Yeah, that doesn't exactly look like Doctor Doom's son, bastard or otherwise. And what's with the possession? That was never his shtick... Still, he was nowhere near done... 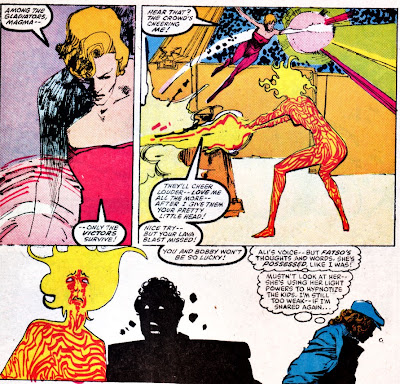 "Ali's voice... but fatso's thoughts and words. She's possessed like I was..."

Yes, Dazzler gets herself mind controlled and in an added twist, her new owner uses Ali's light powers to hypnotise everyone who looks at her. Kitty is smart enough to look away, but... 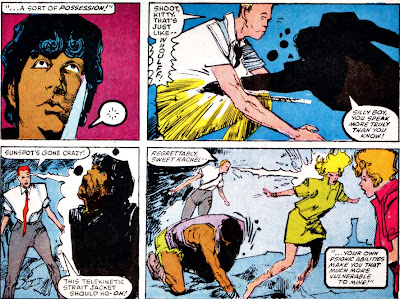 "Regrettably, sweet Rachel...
your own psionic abilities make you much more vulnerable to mine."

So in the space of two pages we have five mind control victims... High time for the big reveal, just who is this mind controlling master villain? Can you guess who it is? That's right, nót Alexander Flynn. 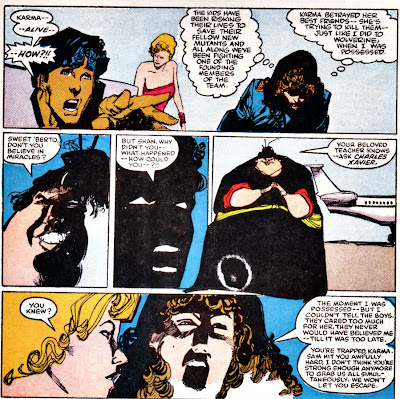 "Karma betrayed her best friends... she's trying to kill them...
just like I did to Wolverine when I was possessed."


You'd think the team would be able to handle one corpulent woman, but Karma forced her harem of slaves and attendants to put knives to their throat, ready to kill themselves if she wasn't allowed to board her plane. So the New Mutants begrudginly watch her take off, swearing to bring their former teammate in.

But more on that in part two of The Karma Conundrum: Mind Controlling in Madripoor
Posted by Clarmindcontrol at 2:45 PM