When we last left the pages of Marvel UK's Captain Britain, future X-man Betsy Braddock had just made her debut... and managed to get herself mind controlled within the space of that 9 page appearance. Some people are just naturals, it seems...

Yes, after seeing her older brother Jamie crash his sportscar under mysterious circumstances, Betsy ran to get her twin brother Brian 'Captain Britain' Braddock in order to deal with this family emergency. However, she got herself mind controlled by the villain of the piece, one Dr. Synne... Who also happens to be an old enemy of Jamie's, as revealed in this bit of exposition from Captain Britain # 9.

"Every person who's confronted Synne has been transformed into his devoted slave."

The talking man with the bandaged foot is Jamie Braddock, who Claremont would later reveal to be an insane reality warping mutant. But here, he's just Brian's somewhat stuffy, aristocratic older brother chattering away. The ginger lady in the back is Betsy, by the way... for some reason her hair turned from an almost fluorescent blonde to this ginger auburn hue.

Sadly, that wasn't the only thing not right with her head...

"Your will is mine, Betsy Braddock... Now and forever... to do with as I please!"

Unbeknownst to her siblings, the evil Dr. Synne took control of Betsy's mind and showed her things that weren't necessarily real... Or there, for that matter.

But bless her heart for not cowering in a corner, Betsy took action... 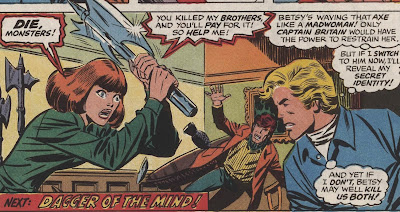 The next issue promo blurb doesn't do the story in Captain Britain # 10 much justice. After all, it's not exactly a dagger the mind controlled Betsy tries to put in her brothers' skulls.

Obviously, its never made clear whether 'dagger of the mind' is a reference to the classic Star Trek episode revolving around mental patients taking over the asylum and using its mind alteration device against their wardens or an actual shout out to Shakespeare's Hamlet, where the line originated...

Fact of the matter is: Brian changed into Captain Britain, saved Jamie and knocked out his sister before he spotted Dr. Synne looking in on them. The villain teleported to safety, which left Brian and Jamie with little else to do than to get Betsy some proper care. So, it only makes sense they go to... 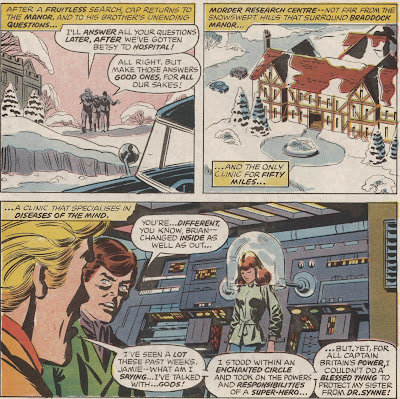 "Morder research centre... Not far from the snowswept hills that surround Braddock Manor... And the only clinic for fifty miles..."

Being the only clinic within 50 miles, I suppose it makes sense for the brothers Braddock to bring Betsy there, but Murder resea... Sorry, Morder... research centre certainly has an interesting intake process... Within minutes, patients are strapped down and placed on wall sized treatment tables with a plexiglass cheese dome over their heads. Not exactly inviting. 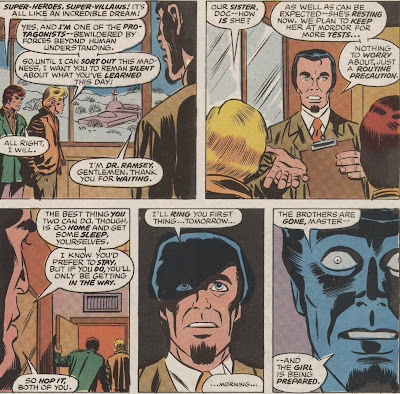 "The brothers are gone, master... and the girl is being prepared."

Just why doctor Ramsey didn't keep Brian for overnight observation after being within earshot of him admitting he's Captain Britain, we'll never know. Fact remains: Ramsey managed to get the Braddocks to leave, so he can start Betsy's 'treatment' on behalf of his master... 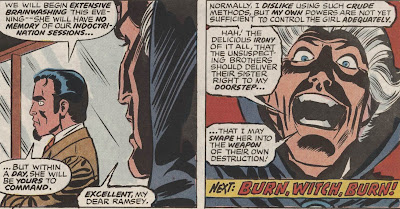 "We will begin extensive brainwashing this evening... she will have no memory of our indoctrination sessions... But within a day, she will be yours to command."

And that's where Claremont's involvement with the Captain Britain book ends, folks. The following issues were written by Gary Friedrich and illustrated by Herb Trimpe. The two of them tried to wrap up the storyline as best they could.

It took four more issues for the Captain to figure out Doctor Synne wasn't the real threat at all... He was just a helpless scientist manipulated by the sentient master computer that father Braddock had left in the manor's basement.

Posted by Clarmindcontrol at 1:23 AM


Me and my friend were arguing about an issue similar to this! Now I know that I was right. lol! Thanks for the information you post.