Reed is Doom, Doom is Reed, we all mindcontrol together!

Reed Richards and Victor von Doom haven often been considered two sides of the same coin. Not hard to figure why: both are brilliant and gifted scientists, but their different characters ensure that their genius takes them down very different paths. But what if Doom would be a force for good and Reed was the evil madman? Its an interesting notion, one Stan Lee and Jack Kirby tackled wayyyy back in Fantastic Four vol. 1 # 10. 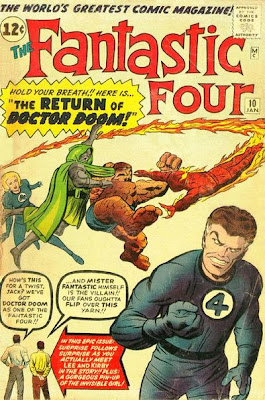 After his most recent defeat, Doctor Doom was lost floating in space where he was picked up by an alien race known as the Ovoids. Doom soon learned the Ovoid were basically immortal thanks to a mental technique that allowed them to switch their minds between bodies. The good Doctor persuaded the Ovoids to teach him this technique as well and as soon as he was back on Earth, Doom switched minds with Mr. Fantastic. As Reed, he devised a scheme that would kill the rest of the FF, but Reed-Doom convinced the others the real tin-plated tyrant was actually Mr. Fantastic and he managed to cast Doom back into his own body. Imagine that: prologue, setup, plot, climax and resolution all within 22 pages? Nowadays getting to the end would cover two tradepaperbacks.

So what does this have to do with Chris Claremont and his pet peeve of mind control? Well... Nothing really, just trying to provide a proper historical perspective. But still, the final mind control story Claremont introduced during his FF-run, starting in issue # 25 does seem at least partially inspired by the old Lee/Kirby tale of mind switcheroo. 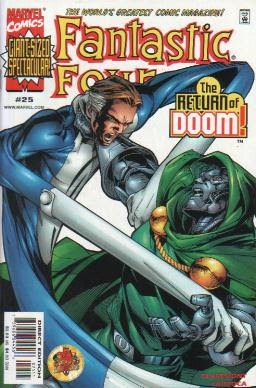 By this point, no one had seen Doctor Doom for over two years. He had disappeared at the end of the Heroes Reborn: The Return storyline that launched the current FF-series. So, his return to the Marvel Universe was celebrated in a big way with a series of Claremont-penned DOOM oneshots. The books filled us in on what Doom had been up to. We'll get to that eventually, but in a nutshell: after the heroes left the Earth they'd been on, it became a mess. Doom was the only one left to restore order and so he did. And Doom finally came back in # 25 of Fantastic Four in which Doom showed up with an army and several superpowered beings to confront the Dreaming Celestial. 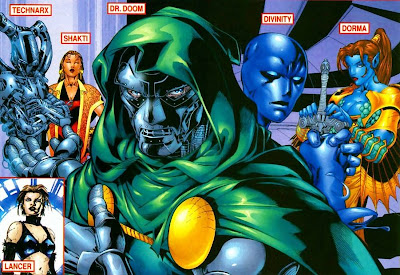 Alongside the Fantastic Four, Doom and his Generals manage to stop the Dreaming Celestial's evil schemes for both Earth and Counter Earth. But not before the Celestial plays a cruel trick on Reed and Doom. Unbeknownst to everyone, the Celestial casts Doom out of his armor and encases Reed inside it. Talk about a twist you didn't see coming... When the dust clears, everyone believes Doom is still Doom and Reed quickly realises he has to act like Doom otherwise his Generals would start to mutiny and they might decide to invade Earth with their armies. So, Reed-Doom plays the part of Doom, orders everyone around and proclaims he's taking his place with the Fantastic Four, even claiming the 'widow' Sue Storm as his new wife. Of course, the FF themselves quickly get wise and Reed informs them of his situation: he's stuck inside Doom's armour and he can't break the locks. 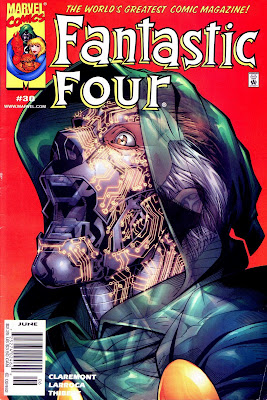 This leads to the rather unusual situation of Doctor Doom leading the Fantastic Four, which makes for some very funny and unusual storylines. The entire Marvel Universe is shocked when Doom and Sue announce their marriage to the world. Also, having Doom as part of the team is enough for hardened villains like the Frightful Four's Wizard to stand down without a second thought. But its not to last: Sue quickly learns Reed is being influenced by the armour, his demeanor becomes more and more like Doom every day. 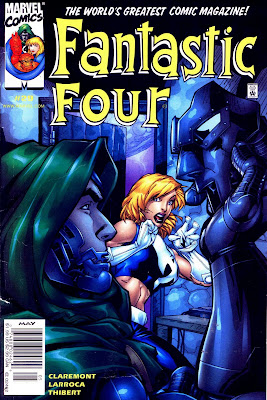 As it turns out, Doom's technology is rewriting Reed's brain synapses to respond more like Doom would in an attempt to optimise performance... It basically is rewriting Reed's mind into a copy of Victor von Doom. Sue is understandably desperate but hasn't the faintest idea how to solve this, then she gets contacted in her sleep by the real Doctor Doom via... dream time. 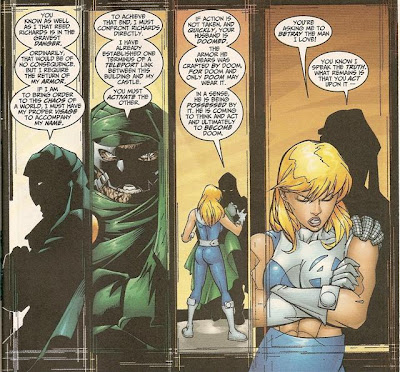 The Celestial didn't kill Doom, but threw him back to Counter Earth where a naked Doom found himself in the middle of a scorching desert. Still, this is DOOM! DOOM, YOU HEAR! And DOOM SURVIVES EVERYTHING! DOOM CONQUERS AND DOOM... Ow, you get the idea. The exploits of Doom in the desert are covered in a rather excellent Doom miniseries by Chuck Dixon and Leonard Manco that came out around that time. In case you didn't read the last panel: Doom offers to help out Sue, but she has to help him get back to Earth so he can claim his armour back. You think she'd help her biggest enemy and betray her own husband? No? Well... take a look at the cover of Fantastic Four # 31... 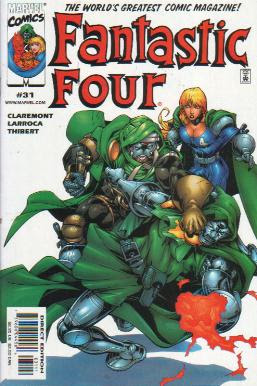 Does that answer your question? Well... in the end, Doom gets his armour back and Reed's himself again... in a way. With that, we've reached the end of Claremont's FF run, mind control wise. He only wrote one issue after that, but that was a rather enjoyable tale about Sue and Namor who get chased around by the last of Doom's Counter Earth Generals still free... Dorma, the Warrior Queen of Atlantis.

Next up: probably some more X-related mind control messes!
Posted by Clarmindcontrol at 8:41 PM

I recently ran into a bunch of cheap back issues of Claremont's FF run - and since it was the run that got me into reading the FF in general, I wanted talk about it - and remind people how good it was.

Your blog is probably the only other place I found on-line that even mentions the events during Claremont's run. You also have a lot of background info I didn't even know about.

I just wanted to say thanks!