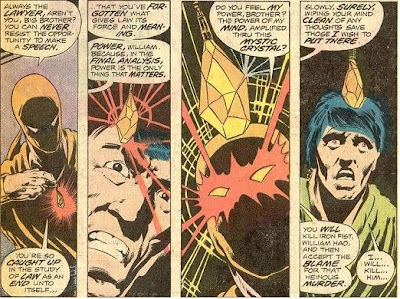 So, remember when Claremont used to do Iron Fist? A few years before Chris Claremont and John Byrne would team up for their classic run on Uncanny X-men, they partnered for the last couple of issues of Iron Fist.

It would turn out to be an enjoyable, productive run... Pitting Iron Fist against foes like the Wrecking Crew and even introducing that villain of villains Sabretooth (or Sabre-Tooth as he was called during his first appearance in issue # 13).

Yet, even back then Claremont couldn't help but himself to some mind control.

In the first panel, a mystic crystal is used to cloud the mind of martial artist and lawyer William Hao. Just call it a simple case of Hypnosis: Murder. Iron Fist survives of course.

And then there's this next scene... 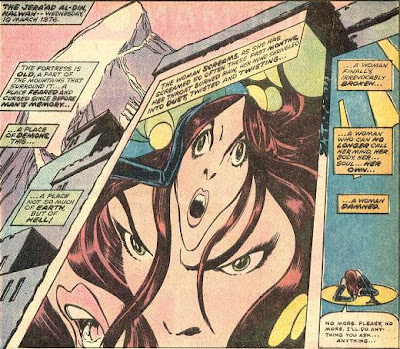 Its interesting to see a writer use an actual date and time in a comic. Creators usually tend to shy away from it, claiming it would not only date their work, but also cause continuity issues because the characters themselves don't tend to age in real time. But, getting back to the mind control at hand:

Poor Colleen Wing! I guess associates of the Iron Fist just can't catch a break. Colleen was working on a case in the Arabic state of Halwan when she was kidnapped by the criminal mastermind known as Master Khan.

He deemed Colleen a useful asset in his plans to destroy Iron Fist, but only after she had received some... proper conditioning. To provide these services, Khan called upon Angar the Screamer to break her spirit and put Colleen under his command.

Angar did this by, surprise surprise, screaming. His voice causes people to experience illusions and hallucinations with devastating effects to their psyche...

For early Byrne art, heck, for any artist, this is a prime example of creativity in storytelling. Not only is Colleen's decent into madness being shown in all its harrowing detail, the entire scene itself is actually part of the fortress Khan's keeping her captive in.

Sublimely surreal!
Posted by Clarmindcontrol at 12:05 AM